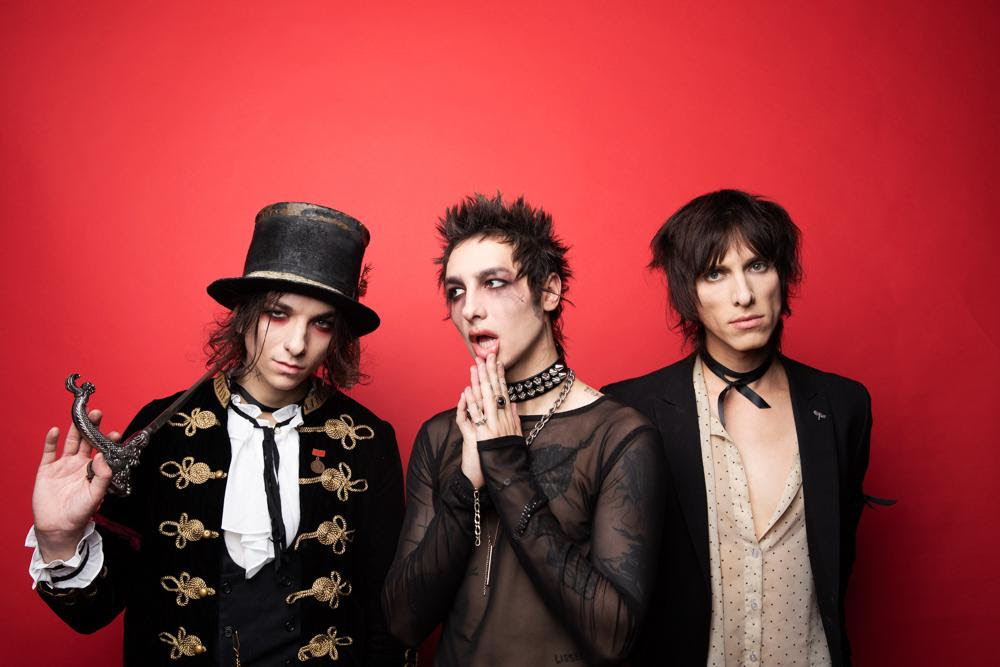 PALAYE ROYALE have today released a brilliantly haunting, cover of the Tears For Fears smash hit, ‘Mad World’. Despite the original being released nearly 40 years ago, the timeless content of the song is just as relevant today as it was back in 1982. Now, Palaye Royale have put their own indelible stamp on the classic track, honoring the original version but with an undeniably modern and unique twist. Listen to the track here and watch the accompanying visualizer for Mad World’ here.

PALAYE ROYALE released their third studio album titled THE BASTARDS back in May which had an incredibly successful first week, hitting #1 on both the Alternative Albums and Rock Albums Charts, #4 on Independent albums and #12 on the Top 200 Alternative Chart. Since its release, THE BASTARDS has hit 43 million total streams with 1 million monthly listeners on Spotify . World wide, the band has a total of 170 million streams with all albums combined.

Musically, the album is an enormous step-up for the band. It is, in turn, dark, lush, angry, vulnerable, caustic and warm. From the grandiose Bond-theme-esque ‘Tonight Is The Night I Die ‘, to the darkly jarring ‘Anxiety’, from the quietly heartbreaking refrain of ‘Lonely’ and the massive fuzzed up, distorted guitars of ‘Nightmares (Coming Down)’, THE BASTARDS demonstrates just how far the band have expanded their writing and musical dexterity, rounding out their already accomplished arson with flourishes of electronics, metal beat-downs, drum n bass beats and haunting string arrangements. There are singles on the album, luminous highlights, but it’s also a piece of work that works beautifully when listened to as a whole.

Lyrically, the album addresses a number of important issues, prevalent to today’s youth – struggles with mental health, the gun violence epidemic, substance use as a means to escape a difficult reality and parental abandonment all play a part in the album’s rich lyrical tapestry. Speaking on the band’s refreshingly honest and open approach to writing on the new album, Remington adds

“We need a little honesty and a little truth. The world is getting so tainted by everyone trying to be so fucking perfect and so goddamn PG and trying to walk this line of not trying to of end anyone. People need to be themselves, just for 20 minutes at least.”

In short, THE BASTARDS is an album that demands your attention.The world needs PALAYE ROYALE right now and PALAYE ROYALE have delivered in spades.

PALAYE ROYALE are leading a generation in togetherness through honesty, danger and infectious art-punk. Their album Boom Boom Room Side B was released in September 2018 via Sumerian records and saw an impressive first week on the Billboard charts, debuting at #17 on the Top Albums Chart, #3 Top Alternative and #6 Top Rock. The lead single from the album, ‘You’ll Be Fine’ hit #23 at rock radio and to date has had 10.5 million streams on Spotify.

PALAYE ROYALE have gone from playing any show they could whilst sleeping in their car to playing mega-arena shows with names as iconic as Marilyn Manson, Rob Zombie and Stone Sour, clocking up an incredible 700 shows in 4 years. That, plus appearances at festivals such as Reading and Leeds, Download, Sonic Temple, Isle of White, PinkPop and Nova Rock, has seen PALAYE ROYALE hone their live set into something visually and sonically stunning.