Out today: Rising Midlands punks THE NOVUS share new single ‘I Serve Not’ 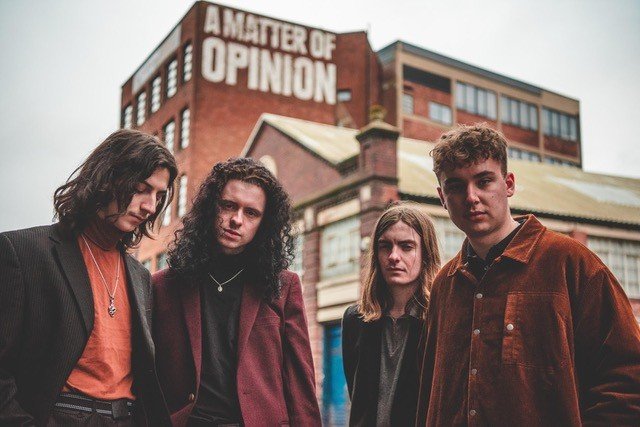 ANNOUNCE DEBUT EP: ‘THALEIA STANDING’
OUT FRIDAY 18TH JUNE
HEAR NEW SINGLE: ‘I SERVE NOT’
Photo credit: Phil Drury
Leading the Gen-Z charge fuelled by council-estate angst, and longing for escape from small-town mentalities, fast-rising Midlands outfit THE NOVUS today confirm their eagerly anticipated debut EP, ‘Thaleia Standing’ – due Friday 18th June.
Coinciding with the announcement, the band have shared ‘I Serve Not’, the first single to be taken from the EP. Written around the time of the 2019 General Election, the track is a representation of the band’s resentment towards those who do not look after others.
“It also represents the resentment of those who exploit people for self gain. The lyric ‘it’s simple common sense’ came about from Jacob Rees-Mogg’s interview with LBC surrounding the Grenfell victims. It became so poignant in this track because it truly defines the ultimate meaning of this song.“ tells vocalist Connor Hill.
Named after Thaleia, the Greek muse of comedy; ‘Thaleia Standing’ is a story about the personification of the mask.  We live in a society where we conform to people’s expectations, put on a brave face and cover up our true feelings for the sake of others; on ‘Thaleia Standing’ The Novus explore whether life is easier should you put on a mask and conform to social norms, or learn to understand your own feelings and emotions; leaving the mask behind as an entity rather than a physical being.
Impossible to define, The Novus extract influence from all areas of the musical spectrum – from 70s psychedelic rock to contemporary post-punk; entirely enamoured with every aspect of the eternal realm labelled ‘art’.
On their debut EP, produced by Gavin Monaghan at Magic Garden Studios (Editors, The Blinders) those influences present themselves in the form of gritty, defiant guitars, growling punk vocals and swaggering confidence driven solely by the sheer anger and need for change felt by the youth of today.
THE NOVUS – ‘THALEIA STANDING’ EP
OUT FRIDAY 18TH JUNE 2021
HEAR ‘I SERVE NOT’
ABOUT THE NOVUS:
The Novus are Connor Hill (vocals), Thomas Rhodes (guitar), Tyla Challenger (bass) and Euan Woodman (drums); four boys born in Stourbridge in the year 2000 (three of them on the same hospital ward). Having grown up making music together in their high school music department before following each other to college, the boys made the collective decision to move in together in their musical home of Birmingham during the UK lockdown.
One of few bands to complete a socially distanced UK tour in October 2020, The Novus may have had their momentum disrupted by the COVID pandemic; but in no way allowed it to prevent them from career-defining achievements. From their debut vinyl release in partnership with Flying Vinyl to playing a sold-out show in Paris, the band soared through the year in flying form.
Having been described as “the most powerful thing to come out of Birmingham since the industrial steam-engine”, The Novus has amassed support from the likes of BBC Radio 1, BBC 6Music, Radio X, Gigwise and countless new music tastemakers; and become renowned for their raucous, sell-out DIY shows often in unusual and secret locations.
2021 LIVE DATES:
30th May – Hare and Hounds, Birmingham (SOLD OUT)
31st May – The Water Rats, London
21st July – Jam On The Farm. Sussex
14th August – Sonic Gun Weekender, Birmingham
27th – 29th August – Camper Calling Festival, Warwickshire
29th August – Test Fest, Doncaster
4th September – Soma Fest, London
17th September – The Boulevard, Wigan
CONNECT WITH THE NOVUS:
Website | Facebook | Twitter | Instagram