OUT TODAY: Liverpool’s Seprona share new indie-anthem ‘Phone Me Back’ 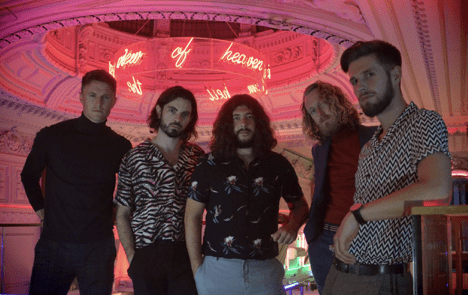 SEPRONA
REVEAL NEW SINGLE:
‘PHONE ME BACK’
LISTEN HERE / WATCH HERE
“Try and listen to this track without moving your hips, we dare you. It’s impossible.”
– Scotts Menswear
“Hooks aplenty and a chorus that could only have come from the banks of the Mersey.”
– This Feeling
Revisiting an angst-fueled morning following a drunken disagreement, Liverpudlian five-piece SEPRONA releases their brand new indie-pop single, ‘Phone Me Back’ on Wednesday 14th April.
Taking their melodic cues from Liverpool legends and injecting them with funked-up drums and punky guitars, ‘Phone Me Back’ is a glimpse into Seprona’s soulful sonic sound journey of rock horns and hip-shaking indie riffs.
Speaking about ‘Phone Me Back’, the band explain: “The song is written about someone getting drunk and ended up arguing with someone they like over something stupid. So, they stormed off in a mood and how they are struggling to deal with all the mixed feelings that would go along with that situation. They regret it almost immediately as soon as they calm down a little bit but they’ve already left so they’re constantly phoning the person to apologise but they aren’t answering.
The opening line ‘I hear the silence talk more later,’ is referring to sitting at home through the week and replaying it over in your mind and thinking about how embarrassed you are about the way you acted and how you’re going to change in the future. Conversations everybody has had with themselves at some point after doing stupid things on a night out!”
In 2019 Seprona began their rise, playing tours and festivals across the country alongside artists such as The Coral, The Fratellis, Blossoms and The Feeling among many others. Further support shows with Kyle Falconer (The View), Space and Little Comets quickly led to their own tour in 2020, which ended with their third sold out home town show in front of 250 people. The band’s singles have been played on BBC Radio 2, BBC 6 Music, Radio X, Amazing Radio and broadcast to millions of people on ITV’s This Morning.
The nucleus of the band has been together more or less since in primary school, when Dan met Woodsy. Niall was in the school next door and the trio started playing together during college. Louis joined during Uni and Adam shortly thereafter, as the final piece of the jigsaw. Seprona are a genuine band of brothers who grew up in the same streets. As Niall puts it: “The band is an old friend that lends you his headphones, takes you by the hand, and leads you to a world of memories.”
With a string of new, hotly anticipated singles scheduled for release in 2021, Seprona are the perfect addition to a playlist for fans of Blossoms, Arctic Monkeys, Catfish And The Bottlemen, The Black Keys, Red Rum Club and Two Door Cinema Club.
SEPRONA – ‘PHONE ME BACK’
LISTEN HERE / WATCH HERE
Seprona are:
Daniel Badger – Vocals/Guitar
Louis Birchall – Guitar
Niall Blanchflower – Synths/Keyboards
Chris Woods – Bass
Adam Maher – Drums
For more information:
www.facebook.com/seprona
www.twitter.com/sepronamusic
www.instagram.com/sepronamusic