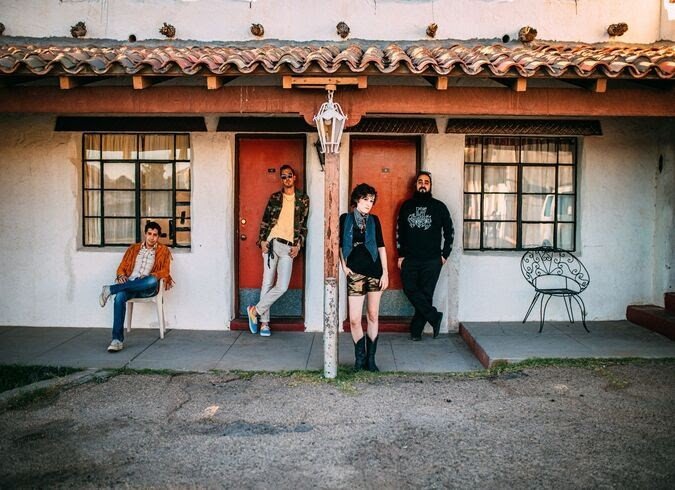 NEVER A MOMENT ALONE
NEW LP FROM EMILY DAVIS AND THE MURDER POLICE
Davis cues up discussions around climate change, systemic racism, and income inequality, specifically, between thumping layers of drums and their sky-tearing lead vocal – American Songwriter
The band deftly melds the seemingly disparate worlds of folk and punk and flexes their own chameleon-like ability to adapt to pretty much anything, proving exactly how it made sense that they were able to open for bands like Bad Religion and Leftover Crack and then share a stage with Neko Case. – Glide Magazine
With every song, you realize that this band has hit on a winning formula – Americana Highways
Relentless hardcore tempo, but using folk-oriented instrumentation – Rebel Noise
Like a runaway train after a wild west shootout, EDMP shows us a different side of the Texas music scene, and we’re here for every minute of it – East of 8th
Emily Davis & The Murder Police have something special, the magic that only comes from truly loving what you do and having fun with it. It makes every track sound a little louder, every lyric hit a little harder. It makes you fall in love with them and the music they make – Yack! Magazine
With groovy and scintillating drum beats, thumping bass notes/rhythm, high-spirited guitar rhythm, and soothing but somewhat provoking high pitch vocals, Emily Davis and The Murder Police still manages to drop a somber social and political message – Hello Radio

Photo credit: Fernie Ceniceros
STREAM NEVER A MOMENT ALONE
SPOTIFY // BANDCAMP
Today, El Paso’s favorite alt-punk band Emily Davis and The Murder Police released their new LP Never A Moment Alone. “Never A Moment Alone is varied thematically, but one of the central premises is the lack of foresight humans continue to display with regard to climate change and our lack of preparedness for other crises,” front person Davis explains. “We prioritize the wrong things and we aren’t taking seriously the biggest threats to our wellbeing and existence.”
That theme is more explicitly stated in album tracks “Why Weren’t They Stunned” and “Apartment Homes,” a nihilistic yet sonically upbeat and cheerful song that’s basically a big “what-if”—what will the world look like if we don’t alter our habits? Will we all have to share apartment homes and eat from the same plate?
WATCH: “WHY WEREN’T THEY STUNNED?”
Through dry humor, clever lyrics, and high-energy musicianship, the band tackles the world and society’s penchant for head-scratching behavior with clever lyrics and dry humor as they offer commentary on excessive patriotism expressed in our culture’s worship of the flag in songs like “God Hates Flags, a quarantine love song in “Eden Is The Worst,” and substance abuse as escapism in “Artificial Happiness.”
With “Semicolon,” Davis, who lives with ADHD and Bipolar II, relays a candid take on mental health. “I wanted it to be relatable to anyone who might struggle with their mental health in one way or another,” they explain of the track, its title inspired by Project Semicolon whose tag line, is “You don’t have to end your sentence.” Davis also sees a semicolon as fixed between two separate entities—and for the person with bipolar disorder, those entities are mania and depression.
WATCH: “SEMICOLON”
Davis, a former member of Cigarettes After Sex and desert-punk shredder, has a powerful voice reminiscent of legends (and personal influences) like Dolores O’Riordan, Jenny Lewis, and Neko Case, and The Murder Police—Jorge Torres (electric guitar, backing vocals), Jose Macias (bass guitar, backing vocals), and Tomas Tinajero (drums, backing vocals)—back Davis up like a freight train of energy.
EDMP has found success across the nation through their poignant music, lyrical vulnerability, and creatively engaging social media presence. Davis has had a fascinatingly unique journey to the national stage. Their YouTube channel, featuring numerous punk rock covers (of, most notably, Bad Religion) has drawn serious attention—accumulating nearly seven million views. Davis has clearly proven their talent deserves to be noticed, and noticed they were, leading to the band’s most significant outing to date—an opening slot on legendary punk band Bad Religion’s 2019 fall tour to packed venues across the country.
The band has some significant accomplishments under their belt, even beyond their 2019 run with Bad Religion. In 2017, Davis toured solo with Bad Religion frontman Greg Graffin, supporting his at-the-time recently released solo record, Millport. In 2019 alone, the band opened for Leftover Crack, The Toasters, Authority Zero, and alt-rock cult superstars Cold War Kids.
With Never A Moment Alone, the EDMP’s second full-length effort, Davis has deftly continued to curate a brilliantly unique blend of 90’s-inspired alt-rock, folk, and punk that will expand your horizons while it tests your speakers. Never A Moment Alone is available for purchase on their website, and at Bandcamp, iTunes, and Amazon.
EDMP will celebrate the album’s release tonight in El Paso, Texas with a live show at Love Buzz. The band will also perform live at Launchpad in Albuquerque, New Mexico on July 23rd, and in Santa Fe, New Mexico at Tumbleroot Brewery & Distillery on July 24th. Be sure to follow EDMP at the links below for more upcoming tour announcements.