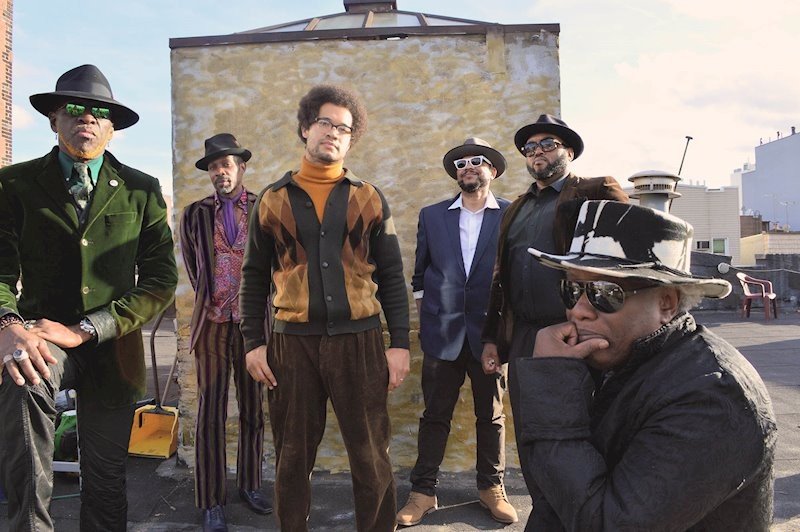 NYC-based rock-punk-funk fusion outfit Dope Sagittarius present their new single ‘Black Empress’, a rocking hip-hop electro soundclash – a song for this Black Lives Matter age, where each person plays or rhymes their feelings about the endless stream of police shootings of Black people.

Dope Sagittarius is the brainchild of Harlem-based Luqman Brown, whose mother is a folk-singer-turned-teacher and father a well-known playwright. The independent spirit of art in his blood got amped up early upon seeing Funkadelic at the Apollo. By high school, he had joined his third band — punk-funk outfit FunkFace, who first opened for 24-7 Spyzand soon Fishbone, slowly rising to prominence through hundreds of shows and three studio releases.

“When I wrote this song, back in 2016, it was because I was fed up with the killing of unarmed Black people by police that year and throughout American history. Sadly, not much has changed since then. This is my way of saying that, if we can’t stop this senseless killing, the world will end in chaos and violence,” says Luqman Brown.

“This is a rock tune that defies the genre thanks to the otherworldly violin playing of Mazz Swift (who’s played with everyone from Whitney Houston to Valerie June and, most recently, as string mistress for D’Angelo’s ‘Vanguard Strings’), as well as the lyrical mastery of Paris-based hip-hop legend/wordsmith/rap pioneer Mike Ladd, who The Guardian described as “the king of the hip-hop concept” and who has performed with legendary London Street artist Remi Rough and visionary jazz pianist Vijay Iyer).

The accompanying video was directed by Morgan Freeman with support from cinematographer Andrew Coury. Produced by Carlyle Smith with Executive Producers Luqman Brown and LaRonda Davis, this video was filmed at YouTube Studios New York City and stars Angelana Jonesas the Goddess, Anthony Bowman as the Newscaster, along with M.C. Whistler on Vox/ Guitar, Ernest G. D’Amaso on Bass, Entrified Mcloudon Keys and Ramsey Jones on Drums.

This is the latest taster of their ‘Sacred Places’ album, which will be released on 12″ vinyl on May 14 via their own imprint Buddhabug Records. The record also comes with a copy of the comic book “Dope Sagittarius In the Bumbaclout Strain”, which was written by Luqman Brown with artwork by Tim Smith III.

“Tim has worked on many Marvel titles such as ‘Iron Man’ and ‘Ms Marvel’. He also did a series called ‘Black’, where the only people in the world who had super powers were black. My comic is the first chapter, introducing you to three tuskegee airmen (Captain M.C. Whisler (that’s myself), Sargeant Bambam (that’s William Ramsey Jones) and Leftenant Spanish (that’s Ernesto D’ Amaso). They have been chosen by the great Bam Beyonder to fly a B-29 bomber plane through the multiverse to stop the evil D Incredible from destroying all life with mediocre music,” says Luqman Brown.

Dope Sagittarius also recently revealed alt pop jazz single ‘Define Love’. Filmed at Studio 111 Brooklyn, the video was produced by LaRondaDavis for Primordial Punk and directed by James Muscarella. This song features Micah Gaugh (The Veldt, Burnt Sugar, The Arkestra Chamber) on sax, jazz luminary Marc Cary (who’s played with Dizzy Gillespie and Meshell Ndegeocello) on piano, the incomparable Corey Glover (Living Colour) on backup vocals and finally, the Master himself, Ronny Drayton (who’s played with everybody from the Persuaders and The Chambers Brothers to Defunkt, Nona Hendryx, and 24-7 Spyz) on guitar.

While the ‘Sacred Places’ album was originally set to release in 2017, Luqman suffered a stroke. Everything screeched to a halt while he learned to speak and walk again, followed by heart surgery in 2019. After two years of continual recovery, he’s back and ready to present this album, as if he’s never missed a beat.

“Being able to properly put this record out into the world means that I didn’t give up in the face of death. This album was supposed to be released in 2017, but I had a stroke as a result of severe complications with my heart. In 2019, I underwent heart surgery to place an LVAD in my heart to keep it pumping. The result of these health complications left me weak and without the breath to perform,” says Luqman Brown.

“At the time, I thought that myself and this album would never make it out into the world—as proud as I am of it. Nevertheless, I slowly came back and now the world will get to hear what it’s like living in NYC every day—hard times, staying alive, and taking the time to have a good brunch along the way.”

‘Define Love’ is out now across digital stores such as Apple Music and streaming platforms at Spotify. The ‘Sacred Places’ LP will be released on vinyl on May 14, and can already be pre-ordered via Bandcamp and also from Buddhabug Records.