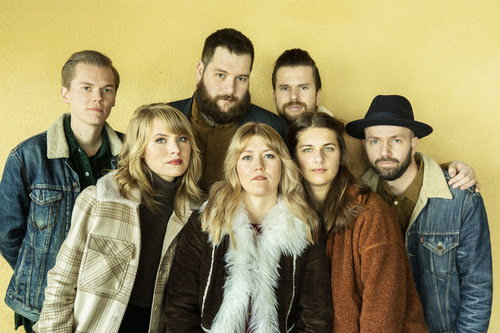 The Northern Belle. Photo by Julie Marie Nagelstad.
“The feeling of belonging, love, empathy in tragedy, makes you smile inside and out.” – Come Here Floyd
“A record that pays tribute to its inspirations while also showing true originality.” – Country Music News International
“Has a true homegrown feel with deep, emotional musicality and shiny vocals that would brightly color the darkest of moods.” – Gas Mask Magazine
“A sweet and seductive 70’s influenced track that hooks on first listen. The bright harmonies are immediately reminiscent of Christine McVie (Fleetwood Mac) and Jenny Lewis, and with enough soul to conjure Sound City meeting Muscle Shoals.” – Glide Magazine
“The sun shines brightly in the new americana treasure from Norway’s The Northern Belle.” – Last Day Deaf
“Another delightful pop gem.” – Refinery 29
“A sugary stream of paisley-patterned melody.” – The Autumn Roses
“Sounds like a conversation between Stevie Nicks and Dolly Parton.” – Wide Open Country
July 12th, 2020 — Written as an examination of personal relationships, the new album by The Northern Belle is aptly titled We Wither, We Bloom. The Norwegian septet is among the pioneers of the nordicana scene that has been gaining momentum in the US the last few years. Fronted by prolific singer-songwriter Stine Andreassen (also of folk quartet Silver Lining) and armed with pedal steel, slide guitar, lush harmonies, a string quartet and their secret weapon, the Norwegian Hardanger fiddle, The Northern Belle have developed their own unique brew of pop-oriented americana and folk music. Imagine Fleetwood Mac fronted by Jenny Lewis in a country mood.
Brimming with melodic tunes and clever lyrics, We Wither We Bloom is the band’s third studio album, albeit the first to be released internationally. Having made the difficult decision to quit her day job to pursue music, Andreassen and The Northern Belle received widespread praise and a Spellemann nomination (Norwegian Grammy) for the 2018 album Blinding Blue Neon. In the spring of 2019, Andreassen traveled to Nashville for three months to write the follow-up. The welcoming and thriving music scene found east of the Cumberland River sparked a creative songwriting spell that resulted in this inspired collection of tracks. The distance from home allowed for new views on friends, family, love, loss and homesickness, resulting in the band’s most personal album to date.
Constantly evolving as a band, The Northern Belle’s sound in 2020 is inspired by contemporary acts such as Erin Rae, Kacey Musgraves, Phoebe Bridgers and Marit Larsen, as well as legends such The Beach Boys, The Byrds and Glen Campbell. All resulting in a record that pays tribute to its inspirations while also showing true originality.