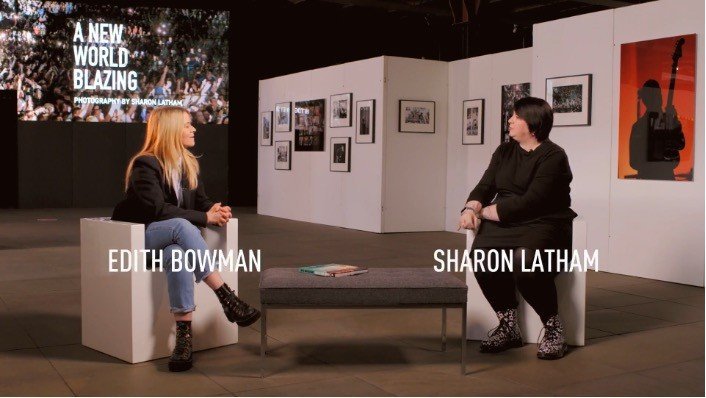 A New World Blazing is a celebration of one of the world’s most successful artists, from behind the scenes to front of stage, capturing the band at their most dynamic, and their most intimate. It is the first ever exhibition to document Noel Gallagher’s High Flying Birds, and features over 40 images by Sharon Latham, all fully endorsed by Noel himself.

Noel: “Down the years I’ve been lucky enough to work with some of the best photographers in the world and I would put Sharon right up there. At its best a photograph should speak. What are the pictures saying? They are saying: We – NGHFB – have the best job in the world. To work, play, travel and party with these people is an absolute pleasure. I’m so happy that Big Shaz was there to capture these moments.”

The exhibition will premiere online initially at www.redhouseoriginals.com with limited edition prints and special deluxe artworks available to view and purchase, many of which are signed by both Sharon and Noel.

Viewers can also enjoy a 360 degree virtual tour of the show, plus an exclusive film narrated by Edith Bowman. WATCH HERE

Sharon first came to prominence in 2010 as the first female official premier league club photographer for Manchester City. It was a shared passion for the football club that ignited a friendship with Noel, and led to unprecedented access to the band over a period of five years.

Sharon: “The first interview that ‘Pep’ [Josep Guardiola] ever did was with Noel, and that was my last shoot before I left the club. I put my foot in the water and asked to go on a few gigs with Noel on tour and he said ‘Yeah, Shaz – no problem’. When the 2016 tour started I asked if I could shoot a couple of gigs, he said ‘Yeah, come to America’. I was only supposed to be there for two weeks and it turned into four years.”

A New World Blazing will launch initially online at anewworldblazing.com with plans to open the exhibition at multiple venues across the UK to be announced shortly.

As previously announced, Gibson, the iconic, American guitar brand, has teamed with Noel Gallagher to re-create his beloved Gibson J-150 acoustic guitar. Since first making an appearance in the music video for the classic Oasis song “Little By Little,” the Noel Gallagher Gibson J-150 has been Noel’s go-to acoustic guitar for over 20 years. Along with a custom case, signed label, and reproduced hand-written lyric sheet, the Noel Gallagher Gibson J-150 guitar will also include an authorized adidas Trefoil Decal resulting in a guitar that is truly Familiar to Millions. Seen and heard by audiences around the globe, the Gibson J-150 has not left Noel’s side and is available worldwide on June 22 via: www.gibson.com.

Born in Manchester in 1967, Sharon Latham is a renowned photographer who is currently working with Noel Gallagher’s High Flying Birds.

Latham first came to prominence as the first female official Premier League photographer with Manchester City. Her images captured the exciting atmosphere of every home game ‘pitch side’, whilst her portraiture of players off the field conveyed the personal pride of each player as they achieved their unprecedented success.

In 2016, after leaving Manchester City, Latham accompanied Noel Gallagher’s High Flying Birds on numerous international tours, visiting United States, Japan, Europe, Australia and New Zealand. The creative relationship with Noel has led to A New World Blazing; a highly anticipated exhibition of Latham’s work as well as the 2018 book ‘Any Road Will Get Us There (If We Don’t Know Where We’re Going)’.

Capturing such moments has led to her work being used by Sky, BBC and ITV as well as featuring in various documentary films. Her artistic practise continues alongside this to photograph highly recognised artists, including Bruce Springsteen, The Rolling Stones, Coldplay, Elbow, The Stone Roses and many more.

Back The Way We Came: Vol 1 (2011-2021) also features two brand new songs produced by Noel Gallagher and Paul ‘Strangeboy’ Stacey – ‘We’re On Our Way Now’ and ‘Flying On The Ground’.

The highly anticipated album will be available on limited edition deluxe formats, with a bonus disc including previously unreleased acoustic versions, remixes, instrumentals and a demo. There will also be a limited edition numbered, hand-pressed, coloured double LP with an exclusive art print released for Record Store Day on June 12.

RedHouse Originals Gallery specialise in Modern and Contemporary Art. Based in the centre of Harrogate, North Yorkshire, the gallery has hosted major exhibitions by artists including Sir Peter Blake, Eduardo Paolozzi, Candie Payne and Dudley Edwards. Initially established online, RedHouse has been actively involved in exhibition work since 2006. They also work with several leading multi-platform artists including The Coral, Peter Doherty, Goldie, The Coral and Horace Panter.

Gibson, the leading iconic guitar brand, has shaped the sound of generations of musicians and music lovers across genres for 127 years. Founded in 1894 and headquartered in Nashville, Gibson Brands has a legacy of world-class craftsmanship, legendary music partnerships, and progressive product evolution that is unrivaled among musical instrument companies. The Gibson Brands portfolio includes Gibson, the leading guitar brand, as well as many of the most beloved and recognizable music brands, including Epiphone, which has been on every stage since 1873, Kramer, the original MADE TO ROCK HARD guitar brand, MESA/Boogie, the home of tone, and KRK, behind great music for over 30 years. Gibson Brands is dedicated to quality, innovation, and sound excellence so that music lovers for generations to come will continue to experience music shaped by Gibson Brands. Learn more at Gibson.com and follow us on Twitter, Facebook, Gibson TV, and Instagram.