The Vysteria single marks Night Demon’s fourth 7” vinyl release of 2020.  The song title is a fictitious word conjured by the band’s own darkened fertile imagination.  It is defined as “exaggerated or uncontrollable emotion or excitement incited by the media, especially among a group of people during a pandemic.”

Lyrically, the song is a clear-eyed, unflinching examination of what life has become during the ongoing COVID-19 global pandemic.  “Vysteria” is not a political statement for these emotionally charged times; however, it does single out for critical scrutiny the mass media’s role in igniting, fuelling and exacerbating the virus-related fears that have gripped so many from all different walks of life, socioeconomic statuses, and cultural backgrounds.  The band penned this song in late March 2020, and ensuing events have only served to reinforce and validate their observations.

Musically, “Vysteria” is as savage, hard-charging and relentlessly uncompromising as anything in Night Demon’s catalog.  It has to be, really.  The song channels all of our collective anger and frustration with the present state of affairs into a mighty roar, a cathartic primal scream from the rooftops.

As a special treat, the 7” vinyl version of the song features an exclusive mix by legendary producer Randy Burns, whose credits include Megadeth Peace Sells … But Who’s Buying?, as well as thrashterpieces by Possessed, Nuclear Assault, Dark Angel, Kreator and Death, among others.

The Randy Burns vinyl mix is completely different than that featured on the digital / video version of “Vysteria,” which was mixed by Kurt Ballou, guitarist of seminal hardcore punk pioneers Converge.  The vinyl also includes a highly prized B-side, in the form of a live rendition of Iron Maiden’s “Wasted Years.”
Although “Wasted Years” has sporadically been featured as an electrifying encore to Night Demon’s live performances, this version holds particular significance for die-hard fans. You see, this recording is the lone previously unreleased track from the band’s historic set at the Beachland Ballroom in Cleveland, Ohio on December 2, 2017, which became the acclaimed triple-live opus Live Darkness.

“Wasted Years” was Night Demon’s final encore on that magical winter’s night, and the Vysteria 7” vinyl is the only place where it can be re-lived in all of its unvarnished glory.

The single can be pre – ordered HERE

and is available as: 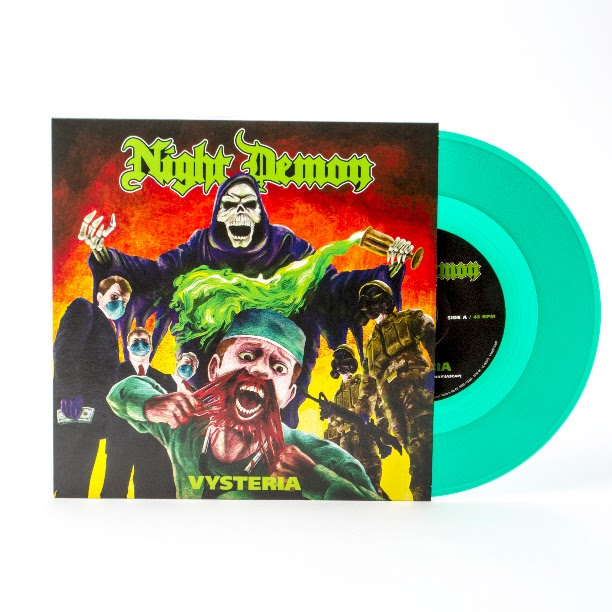 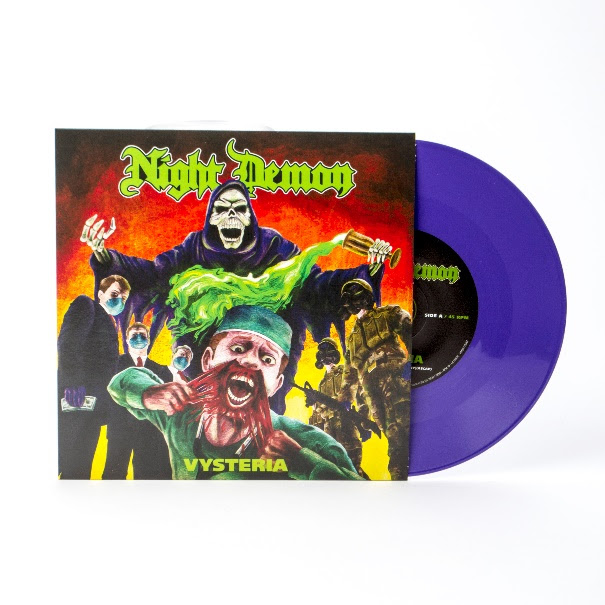 The Night Demon legend continued to grow with the release of their second full-length album, Darkness Remains, in April 2017.  Darkness Remains saw the band delivering all of the expected NWOBHM-inspired thrills and chills, but also honing their songwriting chops, developing more of an individual sound, sharpening their attack, and even taking a few chances along the way.

The album was lauded by leading journalists, publications and webzines around the world, hauling in top honors in numerous end-of-year polls and lists. True to form, Night Demonagain embarked on a grueling touring regimen, including headlining the Darkness over Europe tour and spending five weeks in Europe as direct support for German metal masters Accept.

To celebrate their accomplishments thus far and document their ferocious live rituals, Night Demon released a comprehensive, career-spanning live album, Live Darkness , in August 2018.  Recorded before a packed house of longtime friends and supporters in their adopted second home of Cleveland, Ohio, Live Darkness captured the band’s energy and intensity on that magical night, yielding definitive versions of the Night Demon catalog.  More intensive touring followed, including a headlining appearance at the Hell Over Hammaburg Festival in Hamburg, Germany in early 2019, with special guest Uli Jon Roth joining the band for a spinetingling encore of the Scorpions classics “In Trance” and “Top of the Bill.”