KILIMANJARO LIVE PRESENTS A NEW FESTIVAL FOR 2022…
NECK OF THE WOODS
29 MAY 2022 @ EARLHAM PARK, NORWICH 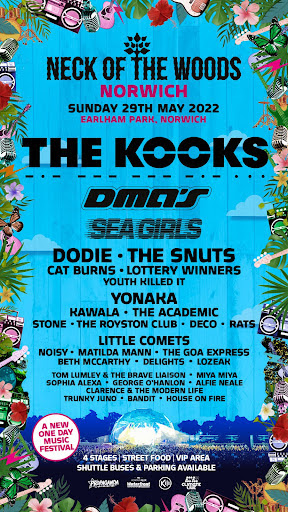 With the first-ever Neck of the Woods just weeks away, the festival is delighted to announce a wave of new acts to perform at the Earlham Park, Norwich event.

Taking place on Sunday 29th May 2022, the festival will be staging the nation’s finest indie and alternative sounds, as well as nine fresh new finds tipped by promoters Kilimanjaro Live to be next-big-things.

Appearing on the ‘Kili Presents…’ Stage, expect performances from singer-songwriter SOPHIA ALEXA, who is set to serve up a hazy slice of raw, bear-all lyrics and ethereal pop-tinted melodies, soulful singer and producer ALFIE NEALE who has gained traction for his genre-hopping blend of pop, disco, jazz and hip-hop and Liverpool indie-rockers BANDIT with their energetic and anthemic take on raucous, guitar-driven rock.

Plus, the stage will see performances from fellow rising-stars plucked from a variety of genres, including lashings of pop from MIYA MIYA and CLARENCE & THE MODERN LIFE, indie-rock from the likes of TOM LUMLEY & THE BRAVE LIAISON and GEORGE O ‘HANLON and alternative indie-pop offered up by TRUNKY JUNO and HOUSE ON FIRE.

These cutting edge sounds join a stellar line-up of previously announced acts. On the Main Stage, attendees can expect a magnificent set from previously announced headliners: THE KOOKS. Over the years, The Kooks have proven themselves to be pillars of the UK indie pop world. Celebrating the 15th Anniversary of their iconic debut studio album ‘Inside In/Inside Out’, the band will be reminding the Neck of the Woods crowd exactly why its songs are still the soundtrack to a whole generation of young people. 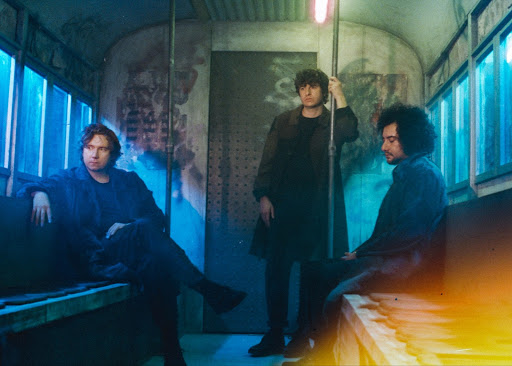 Sizing up a tasty mid-afternoon slot, THE SNUTS will also be tearing up the Main Stage with a set of their arch alternative-rock. Becoming the first Scottish band to earn a No.1 position in the UK’s Official Albums Chart with their seismic debut last year, the West Lothian four-piece will be offering a tantalising opportunity to hear new music from the much-anticipated follow-up to ‘W.L.’. 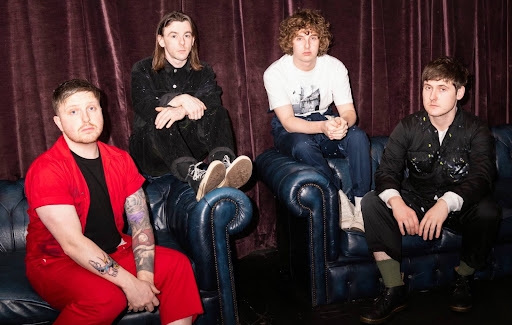 PLUS, getting the festival off with a bang, local legends and “indie-rock social hand grenades” YOUTH KILLED IT will be launching the first-ever Neck of the Woods with an unmissable opening-set.

Over on the Second Stage, attendees will have the opportunity to catch Irish indie-rock frontrunners THE ACADEMIC as they bring the songs of 2021’s acclaimed ‘Community Spirit’ EP and favourites from their Irish No.1 charting debut to the festival. Additionally, Brighton band YONAKA will be topping the bill with their bruising brand of alt-rock. Elsewhere, KAWALA will be bringing danceable afrobeat-inspired rhythms aplenty, CRAWLERS will be demonstrating why they’re one of Liverpool’s hottest bands of the moment, plus there’ll be must-see sets from THE ROYSTON CLUB, STONE, DECO and RATS. 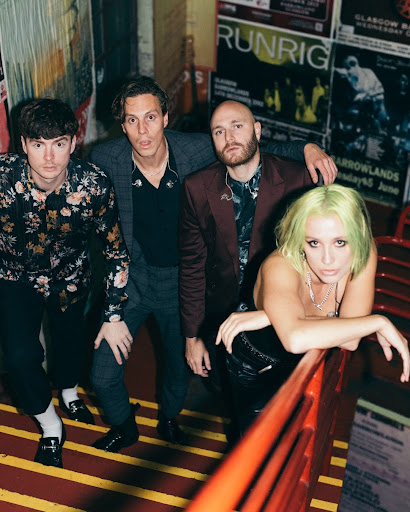 Offering plenty of opportunities to catch the stars of tomorrow over on Stage 3, expect to be introduced to the psych-umbrella’d rock’n’roll of THE GOA EXPRESS, the refined songcraft of BETH McCARTHY; not to mention rapidly rising artists like NOISY, DELIGHTS, MATILDA MANN and more, plus a set from long established indie pin-ups LITTLE COMETS.

Neck of the Woods will also be placing the spotlight on some of East Anglia’s brightest new acts, with Norwich’s own LOZEAK confirmed to be appearing, plus that opening set on the main stage from local legends YOUTH KILLED IT.

In addition to the music, boutique street food stands and bars across the site will be catering to all needs from day til dusk.

With acts appearing across four stages, 14,000 music fans will descend on Earlham Park, Norwich for a day of incredible live music for what promises to be an unmissable addition to the festival calendar. Last remaining tickets are on sale now, but be quick!

Tickets are priced at £45 (+Booking Fee) and on sale now!