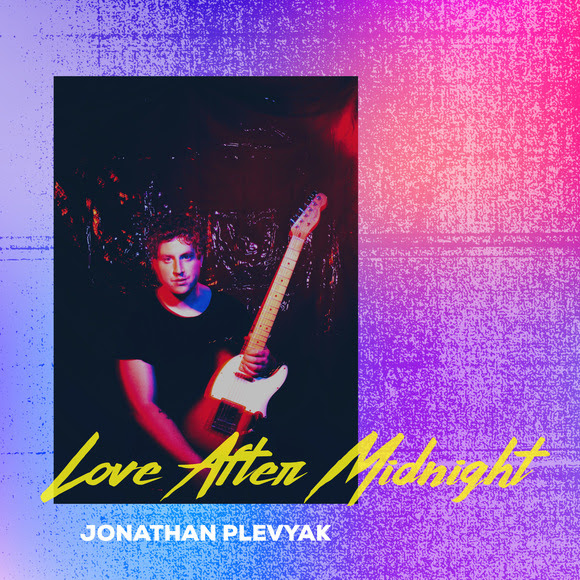 Jonathan Plevyak’s “Love After Midnight” is out now.
August 31, 2020 — Nashville pop-rocker Jonathan Plevyak has released a new single “Love After Midnight” after sharing the song at American Songwriter, who praised the track as “exciting and engaging.”
Songs like Tom Petty & the Heartbreakers’ “American Girl” and Bryan Adams’ “Summer of ‘69” evoke cherished memories, lost loves, and hot summer nights. Pop-rock/Americana artist Jonathan Plevyak plants his new song “Love After Midnight” into the same evocative ground, an arena-sized jawbreaker that sweeps you away into frontman Plevyak’s rose-tinted rear view. The past whizzes by in a sea of electric guitar and his sweet, but super-charged, lead vocal.
Plevyak’s tune, produced by Kenny Kingsborough, harkens to his ‘80s musical heroes while barreling ahead with a unique twist. The intoxicating summer heat hangs thick and ripe between production layers and signals a new stylistic swerve in the band’s catalog. “This song was written out of personal experience. I thought it was the perfect song to tie into this new sound,” he says.
Plevyak has a knack for breezy, high-octane rock anthems. If you know his backstory, it all makes sense. From Baltimore, Maryland, he fell in love with rock music in sixth grade when his father took him to an ACDC show in Washington, DC during the iconic band’s Black Ice World Tour. He recalls thinking, “This is the coolest thing I’ve ever seen.”
Meanwhile, his best friend had just bought Guitar Hero 3, and a weekend binge playing the game only expanded his love of classic rock and new-found ambitions to pick up the guitar himself. His parents bought him his first guitar soon after, and he began self-teaching primarily through YouTube tutorials. His middle school history teacher, a guitarist himself, gave him private lessons for a short period of time ─ but he felt more at home learning on his own. “I honestly hated taking lessons,” he admits.
Later, Plevyak stumbled onto the work of The Foo Fighters, most notably musician and songwriter Dave Grohl’s incisive songwriting. “Dave became the main inspiration for wanting to write songs,” he says. He then began experimenting and writing songs in high school and also turned to John Mayer for inspiration. Plevyak released his debut album, Long Way Home, recorded at a local studio in Baltimore, in his senior year and quickly booked shows, local festivals, and open mic nights as a trio with a couple buddies.
A NSAI (Nashville Songwriters Association International) songwriting conference held in New York City became a turning point for him to really hone his songcraft. During the week-long event, featuring artist coachings, and writing and demo sessions, Plevyak dipped his toes into the Nashville world.
Every few months, he traveled to Nashville to write, network, record, and perform. Nothing could keep him away. While he didn’t have the money to move quite yet, he spent a few years working a restaurant job to save up the finances, while also playing shows and building up a hometown and Northeast fan base. His first Nashville-produced single “Let Me Through” became a No. 1 on the iTunes Singer/Songwriter charts in 2016, and a year later, an EP arrived, containing a far more pop band sound. It was around this time he began issuing music under only his last name, concerned with stressing the importance of the live band to his blossoming aesthetic and approach.
Bigger shows, venues, and festivals came his way. In 2018, he ─ alongside bandmates Garrett Mabe (guitar), Daniel Gallagher (bass), Mason Thomas (sax), and Ben Reiff (drums) ─ finally made the move to Nashville. “That whole first year was spent getting settled and making a new community,” he says, citing such gigs as Whiskey Jam, Musician’s Corner, Tomato Art Fest, and CMA Fest as being vital in forging his live identity.
Later that year, Plevyak was nominated for The Bernard/Ebb Songwriter of the Year Award in Bethesda, Maryland and Songwriter of the Year at the Maryland Music Awards.
With such early success, Plevyak’s sound shifted, as well. “I wanted to really focus on the evolution of my sound moving forward. It’s evolved to exactly where I want it to be,” he says. He plants himself very much in the pop world, but “it’s very ‘80s rock-themed with a dash of Americana.”
“Love After Midnight” straddles across all three genres, clearly defining his songwriting as Petty for the modern era. A full EP is expected to follow.