When making music really IS all about the fans… 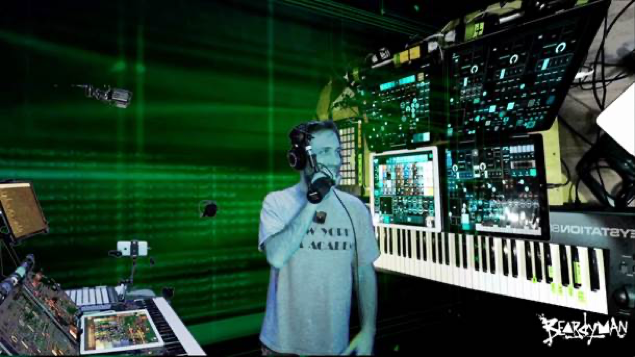 Patrons who collaborate get 10% master royalties, and a co-writing credit on new album

Multi-award winning, 2 x UK beatbox champion and live looping pioneer, Beardyman is hard at work on his new album, and he’s not just “doing it for the fans”, he’s doing it with the fans.

In this ground-breaking new project on Patreon (the creator-first membership platform that allows artists to get paid directly by their fans), Beardyman has created “Milking the Community”, a project intended to redefine the way artists collaborate, connect and give back to their communities.

The initiative offers patrons the opportunity to be remunerated for their contributions to his creative process and to receive a unique, one-off vinyl pressing of their track.

Beardyman is no stranger to audience interaction – his live shows are full of on-the-spot creations, conjured up in the moment, feeding off the energy of the crowd, often inspired by direct audience suggestions, sometimes even sampling the crowd and incorporating them into his music. Now he’s taking the obvious next step…

Patreon allows creators to build memberships by providing exclusive access to their work and a deeper connection with their communities. In Beardyman’s new ‘Production Team’ tier, patrons pay the (deliberately affordable) price of £6.75 for a monthly subscription, and by doing so, are offered the opportunity to present their track ideas and collaborate directly with Beardyman as he produces his forthcoming album. His Patreon community have front row seats to watch the creative process happen on an exclusive, Patreon only live stream.

Beardyman will then go on to choose 15 of the most inspiring ideas and in return, these 15 chosen collaborators will receive 10% of the master rights to their track, a producer credit, and a one-off vinyl dubplate of the piece they and Beardyman create together.

Those who are part of Beardyman’s Patreon community will also have exclusive access to both a limited-edition vinyl pressing of the album, and exclusive Beardyman merchandise, and all patrons will receive a copy of the album digitally along with exclusive bonus tracks.

The Milking the Community project is a first for the music industry and a continuation of Beardyman’s collaborative approach to music-making, as well as testament to the engaged community of fans he continues to build on Patreon.

Beardyman said: “The pandemic was so isolating for everyone, and our wonderful community with its banter and awesome music that we all made together gave me a reason to carry on making art in lockdowns, when everything seemed impossibly bleak. It feels only right that I give something back. No-one’s ever done anything quite like this before, and I really want to get this right.” He adds: “My mission is to create the most interactive music and music-tech community in the world. I count my Patreon community as a partner in this mission.”

Beardyman’s innovative approach to the creation of his new album is a step towards redefining the concept of music ownership and changing who reaps the rewards of creative work. The launch is intended to deconstruct the boundaries between artist and fan, and by inviting the final 15 chosen fans to be true creative collaborators, they will truly share the ownership of the work they co-create, as well as physically own their creation in the form of a unique vinyl dubplate.

“Patreon is hyper-focused on providing the platform and infrastructure creators need to create on their own terms and be successful in growing and running their creative businesses, and Beardyman is taking his community along with him.

Beardyman is the epitome of what Patreon was built to do: give creators a platform to create on their own terms and bring their loyal fans closer to the process. This is a particularly innovative approach to music-making on Patreon, breaking down the barriers that traditionally separate artist and fan to collaborate together and share in the final success of the album. We’re inspired by what Beardyman and his patrons have achieved so far, and are excited to follow this path with his new tier. I can’t wait to hear what is created through this exciting new collaboration!”

Beardyman will also be taking the technology and collaborative mission on the road for his first tour since 2019. He will be playing over 30 dates in the UK and Europe taking ideas, suggestions, and live samples from the audience as he improvises a new musical and audio visual set every night.

Beardyman is one of Patreon’s 250,000 creators globally. Since its founding in 2013, Patreon has built a community of 8 million members, and more than $3.5 billion has been paid to creators since the company’s inception.

Fans can sign up to Beardyman’s Patreon here: Beardyman.