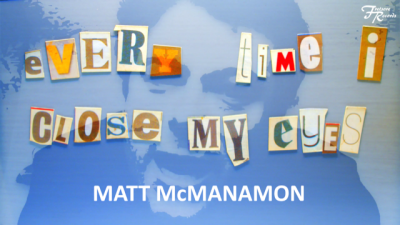 MATT McMANAMON
ANNOUNCES DEBUT SOLO ALBUM:
‘SCALLY FOLK’
OUT 28 MAY, VIA FRETSORE RECORDS
PRE-ORDER HERE
LISTEN TO NEW SINGLE:
‘EVERY TIME I CLOSE MY EYES’
STREAM HERE
MATT McMANAMON is delighted to announce his debut solo album: ‘Scally Folk’, for release on 28th May 2021, via Fretsore Records.
The news comes as Matt today releases a fresh excerpt from the record: “Every Time I Close My Eyes”.
STREAM HERE
Filled with glistening memories of pastimes-been and wide-eyed promises for the future, “Every Time I Close My Eyes” sets the stall for McManamon’s long-awaited solo album; a record that will be his first recorded release since the split of The Dead 60s in 2008.
New single, “Every Time I Close My Eyes” offers a tender tribute to his youngest son: Matthew James McManamon Jnr.  A sleepless child in his formative years who in turn made for a sleepless singer-father, McManamon SNR recalls of the time:
“When he was born and for most of the first year of his life, I would take on the role of his primary carer. I was like a modern-day male version of ‘Mary Poppins’… However, he literally did not sleep ever! So neither did I. When I was lucky enough to rock him into what I thought was a deep sleep, I would jump into bed myself to drift off into a ‘Golden Slumber’ but….always the minute (without fail) I was just about to fall asleep…..he would wake up raring to go no matter what time of day or night it may be.”
A potent piece of Liverpool-preened power-pop that recalls the strident songwriting of The La’s through to The Lightning Seeds, it finds McManamon reconnecting with the sounds of his roots – a theme that flows fluidly throughout his personal new record: ‘Scally Folk’. As McManamon tells of the upcoming album:
“Every song on ‘Scally Folk’ tells a story about something I have experienced and is largely an autobiographical body of work. Musically, when every song is heard in its purest form, ie acoustic guitar and vocal (the way I wrote them) it’s actually a ‘Folk’ album albeit with undertones of pop thrown in for good measure, but it’s essentially Folk.”
Perhaps best known as the febrile frontman one-time Deltasonic darlings: The Dead 60s, and later a touring member of The Specials; over 15 years since tracks like “Riot Radio” raided the charts and indie dancefloors across the nation, McManamon returns to music a reformed character with an altogether different outlook on life.
Choosing to examine the music naturally embedded in his DNA, ‘Scally Folk’ sees McManamon exploring sounds perhaps once side-lined by the pursuits of his younger self and uncovering a new identity within them. With hints of classic Merseybeat to that distinctly Wirral kind of psychedelia and Liverpool jangle-pop, McManamon pays tribute to the city that made him, while also delving deeper into some of the traditional sounds associated with his Irish heritage.
Though its songs document a lifetime of experiences, ‘Scally Folk’ itself was recorded in just 14 days at the Transmission Rooms Recording Studio, Drumlish, Co Longford, Ireland. Assembling a talented backing band of musicians including Vinny Redmond (Angel Pier), Enda Mulloy (Bible code Sundays), plus additional contributions from Andy Nolan (Bible code Sundays), Kane O’Rourke (Nathan Carter, Derek Ryan)  and John Murray (critically acclaimed American singer/songwriter), McManamon’s vision came into vivid focus. Percussion and production come courtesy of the celebrated Mick Cronin (Shane MacGowan, Kodaline, Noel Hogan of The Cranberries).
A record about the passing of time and finding your place within it, ‘Scally Folk’ unpicks the stitches of life’s rich tapestry and uses its threads to begin anew. A humbling work and the realisation of a lifetime’s ambition, McManamon reflects of ‘Scally Folk’:

“I feel it has a lovely mix & balance of power-pop, Celtic infused soul & folk and hopefully demonstrates my talent as a songwriter and storyteller. It is a departure from the kind of music I’ve been associated within the past, but for me, that’s precisely the point and what I aimed to do, I’ve always wanted to record a solo album for many years now, and now I finally have”.

LISTEN TO NEW SINGLE: “EVERY TIME I CLOSE MY EYES” FROM 16th APRIL, PRE-SAVE HERE

Every Time I Close My Eyes

Meet Me By The River

Matt McManamon is the former vocalist and songwriter of The Dead 60s. Releasing their s/t debut in 2005, the band scored 5 UK top 40 hits and surpassed over 100k sales in the UK alone. During his tenure as frontman, McManamon toured with the likes of Morrissey, Kasabian, and Deltasonic label mates The Coral, appearing on stages from Glastonbury to Top of the Pops. Prior to launching his solo career, Matt also toured with The Specials as their live guitarist. Returning with his first music in nearly 15 years, Matt McManamon will release his debut solo album: ‘Scally Folk’ on 28th May 2021.