(Nashville, Tenn. –April 22, 2021) One of country music’s most dynamic new artists, Manny Blu, has released the official music video for his new single, “Train.” With country tempo and rock-infused electric guitar riffs, the song serves as a lyrical plea to a significant other to “hit me like a train” with love and affection. Together the song and the music video set the tone for Blu’s upcoming EP and his new style as an artist –Country Punk. 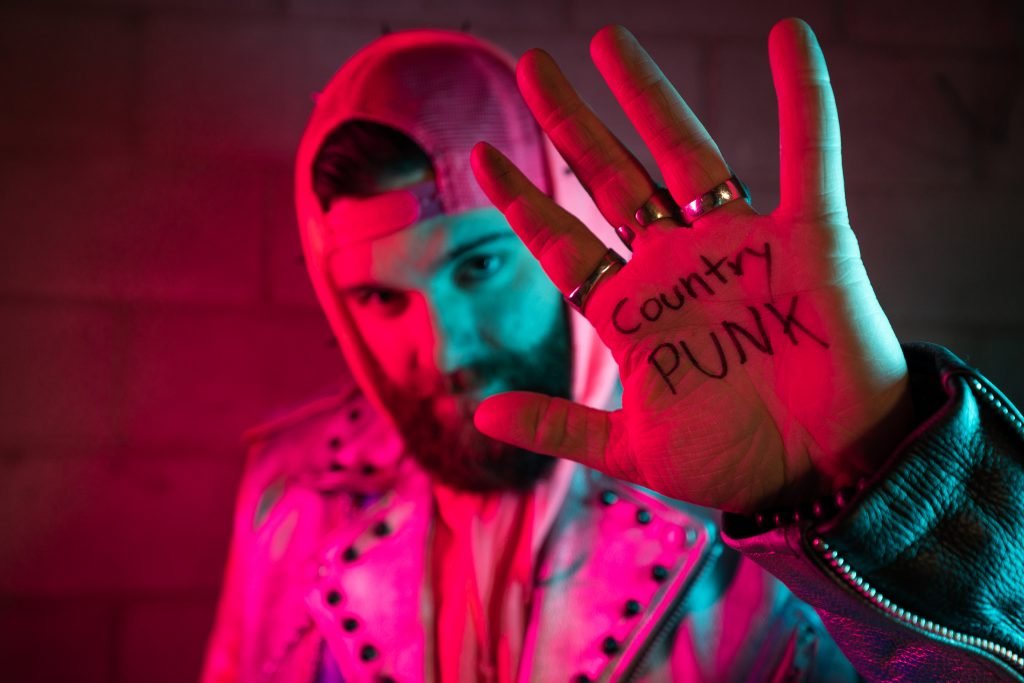 The colourful music video uses graphics and artistry to showcase the aesthetic and energy of what Blu believes it means to be Country Punk. He hopes to inspire all country fans who don’t fit into the traditional country mould to embrace their style and sound.

The “Train” music video was shot and edited by Tyler Follon in one of Nashville’s legendary landmark venues, the Exit/In. In the past, the venue has housed performances by Jimmy Buffett, Waylon Jennings, Johnny Cash, Willie Nelson, and more. The 50-year-old club is now in the middle of a GoFundMe campaign to preserve its historical existence from a development company. To be able to film in such a historic location within the midst of quarantine restrictions was an honour for Blu and his crew. The video also showcases rehearsal footage of Blu and his band in their East Nashville studio, where the whole idea and sound of Country Punk began.

“Train” was produced by Aaron Eshuis (“Chasing After You,” by Maren Morris and Ryan Hurd; Cole Swindell) and co-written by hit songwriters Jessi Alexander (Miley Cyrus’ “The Climb,” Lee Brice’s “I Drive Your Truck,” Blake Shelton “Mine Would Be You”), Ryan Beaver (Ryan Hurd’s “Platonic”, Steve Moakler’s “Breaking New Ground”, HARDY’s “4X4”), and JT Harding (Keith Urban’s “Somewhere In My Car,” Kenny Chesney’s “Somewhere With You” and “Bar At The End Of The World,” Dierks Bentley’s “Different For Girls,” and Blake Shelton’s “Sangria”), the new single grabs the attention almost instantly and makes listeners feel alive with an up-tempo, energetic arrangement.

Manny commented about the track, saying “’Train’ was the perfect song to put out once I announced that 2021 is the birth year of “Country Punk.” Not every song I put out will have a super present punk influence, but ‘Train’ does. It is Country Punk and it’s exactly how I wanted to start off the very busy year of releases we have planned!”

Recently, Manny Blu has received TikTok attention for his videos that showcase his personality and the Country Punk style. You can view his latest TikToks HERE. This year, the former hockey player, MMA fighter, and native Canadian also launched his live performance series Live & Turned Up on his Official YouTube page HERE. Known for his dynamic live performances, Manny and his band wanted to recreate the energy of a live show in each Live & Turned Up release, saying, “I wanted to lean into alternative content, and I thought playing our live versions of songs and recording them was a fun way to do that…we wanted to showcase how exciting our live show is.” In the series, Manny exemplified what ‘country punk’ truly is, which he explains to be “country music to the core, with a punk attitude.”

To date, Manny and his band have released six individual song performances, including their version of The Pretty Reckless’s “Death By Rock and Roll,” “BLOW,” originally performed by Ed Sheeran, Bruno Mars and Chris Stapleton, and new Manny Blu originals, “’95” plus “Old Money” and “Burnout Town” from Blu’s 2020 sophomore EP and “X on My Heart” from his 2019 debut. All performances were filmed in East Nashville’s  H.O.M.E. – a non-profit community for music creators. The Live & Turned Up series concluded on April 9, and will be followed by Volume 2 soon. Follow along here: https://www.youtube.com/MannyBluMusic.

Manny continues to develop and mold his unique vibe to country music – a sound he introduced with his debut EP Leave It Like It Is (2019), followed by his 2020 release, New Ink. Despite the difficulties that all artists had to face in the past year, 2020 was a landmark year for Manny Blu as he continued to make himself seen in the country music community. The promising artist expanded his team to an international level through added representation in the US and the UK, successfully releasing his EP New Ink filled with major songwriters like Josh Osborne, Ross Copperman, and Rhett Akins, and finding success with his debut release from that project “Born to Ride,” reaching over 360K views on YouTube and surpassing over 1M streams worldwide.