Madina Lake are back after a nine-year hiatus with a stellar new EP in The Beginning Of New Endings which drops Sept 18th, we caught up with Bassist Matthew Leone to talk about their comeback in what has to be one of the most difficult times the music industry has ever experienced.

Congratulations on your return, it was quite a long hiatus you guys took, how was the initial adjustment to hanging the boots up for a while?
Thank you! The adjustment is not one that I recommend. Once you’ve managed a career doing what you love the most, anything else will come with a variety of pale in comparison. We were lucky enough to pay attention to the business/industry and forge some fantastic relationships with artists, managers, promoters, and agents. When we decidedly devoted our lives to giving back for the generosity and love that saved my life, we launched a 501c3 Charity Bomb, which enabled us to produce benefit shows for a variety of mental health organizations. This way we can still work in a creative and music-centric capacity while serving others.

During that time did you explore any new avenues musically that previously would have been unavailable to you during the time in the band?
Nathan and Mateo wrote songs for commercials, pop artists, and movie trailers. Dan, sadly, hung up his sticks, while our new-ish drummer Chris moved to Nashville and played in all kinds of bands. He has become an unbelievably dynamic and solid drummer, while I remain an absolutely average bassist. Technique-wise anyways, I like my ideas.

During the hiatus looking back, what did you feel was the biggest lesson/experience that you took away from your time in the band?
Have perspective and be present, recognizing, appreciating, and enjoying what you have the honor of doing. Sadly, while active, I was never present in the band. I was always working on the next creative or business move, and concerned with quality control, the ancillary elements of the band. Ultimately, I was able to shake that and be proud of what we had achieved. Re-entering the domain, I’m going to enjoy every moment of what we’re doing.

The music industry has gone through quite a transformation since 2011 when you guys stepped back, has your approach to making a return been shaped at all by how the fans now consume music, and have you had to adapt at all to this?
Absolutely. Because people just take little bites of music now, we wanted to spoon-feed one song per month. This would give us the best odds for the record being heard. Although we may be shooting ourselves in the foot with our collective favorite Madina song to date, with Tiny Weapons, due to its 8 min plus duration. Consequently, I’ve invited everyone to be in the video. I’m collecting email addresses and sending them the treatment (concept) and I’m asking them to film something that will feed into the direction of the next big mystery behind our social commentary.
2020 was to be the big return to normality for you guys, it’s been quite a year, how have you adjusted to the current musical landscape (Post-Covid), and how this new norm has impacted artists like yourselves moving forward?
Personally, it’s devastated our organization and production company (we will survive, but it’s been almost impossible). Always the optimist, my feeling is that this time has also fostered insanity, confusion, deprivation, division, angst, introspection, curiosity, all the ingredients to inspire creativity and art. We think this is the best music we’ve released to date, and I think the world is in store for a lot of that from artists. The maddening thing is that we live in three countries now and we are having trouble getting everyone in the country to do a www.Veeps.com streaming tour. We are close to resolving that and I can’t wait for it. I don’t like the “new norm,” and I hope that something comes along that snaps us back to it. I can’t imagine my son growing up without going to shows on the weekends.
What do you feel will be the biggest challenge for bands now moving beyond the pandemic?
The biggest challenge facing artists will be to educate themselves on how to sustain their career financially, then get creative. Artist’s revenue streams are from touring, merchandising, and publishing. With one and a half legs chopped out, we will have to figure out how to get a lot of streams on and learn how to pitch for placements (commercials, film/tv, etc). They’ll also have to be more substantive, by offering more ways to engage their audience, whether it’s creating a lifestyle or culture around your band, or going down the novelty route. This could offer opportunities to sell merchandise or subscriptions, or whatever it may be.
Onto the new music, how do you feel the new music sits against the back catalog after such a long break?
Strong! After FTTUTY we went with a producer who has done a load of big records and is incredibly talented, but that’s not what Madina Lake is about. Another Madina Commandment is that we will always, under any circumstance, write our own music (ok, one exception, Billy Corgan hands you a riff, literally). Bendeth [producer] produced Attics To Eden. He’s a great guy, but he was used to being a writer on the records he worked on. We butted heads a lot. In the end, we succeeded in the writing part but failed in the “Madina Lake” sounding record. It’s a shame because we love the songs. #TBONE fits as a natural progression from wherever you jump in on your journey.
This is the direction we should have taken.
What was it like getting back together into the groove again with the band and laying down new tracks?
Like riding a bicycle. Nathan and Mateo had continued their writing through several of the years off, but once we got into the mix, it was a euphoric, comfortable, familiar place. We felt we didn’t have any stakes riding on it, which was liberating. And yet another commandment, “Don’t write the “hit” to get signed.” We just wrote exactly what we wanted to.

Where and when was it recorded?
#TBONE was written in LA, Columbia, the UK, Florida, and Nashville. Two years ago, I flew to Los Angeles while Nathan and Mateo were writing for some pop star in a country I’ve never heard of, who has since become the Queen of this land, I believe. We scheduled a week to whip up a batch of new Madina. When COVID pleasantly invited itself into our universe, we got the tracks together and began sending them back and forth. Mateo is a master engineer/producer/writer. He would send the stems over with a placeholder beat, Nathan would write the lyrics, I would do my bass parts in my office and Mateo would fly the tracks into ProTools and we would send them to Chris with a click track to record drums.

Any particular tracks on the new EP that are personal favorites of yours?
The aforementioned, “Tiny Weapons.” It’s over eight minutes and takes you on a ride through the spectrum of emotions that are closely related to what I imagine most folks are feeling these days.
Did the time away and fresh new eyes bring any new approaches to the recording process at all?
Not so much the time away, but the circumstance. It was nice actually because everyone got to input their ideas and have them tracked and passed around for thoughts. In a way, it streamlined the process and didn’t let anything slip through the cracks. Like when the drummer or bass player says “Hey guys! I have an idea!” in a rehearsal room while competing with a mesa half stack, and random beats it’s likely to be overpowered. This method allowed everyone to lay their parts down and for ideas to be vetted.
The release date is now within touching distance for you guys, how does it feel after so long and what are you most looking forward to over the next 12 months after the release?
We are thrilled. The real world has beat us nearly into submission. Don’t get me wrong, we’ve managed to do so much for so many people with Charity Bomb, and we are on the verge of launching what we believe is the most impactful initiative called Operation GenZEQ – to reverse the trends of bullying, suicide, depression and other mental health afflictions through EQ/SEL education – but it’s a tough gig. We are thrilled to go out there, tour this EP, get the word out about our EQ/SEL campaign, and perform for our friends who have been with us for well over a decade.
Beyond the EP release can we see Madina Lake back in the studio anytime soon to build on this rebirth?
We’re already recording another EP called “Superbia” that will be released in succession to The Beginning of New Endings!
Any last words to your fans waiting for the new music to drop?
Thank you for staying connected. We appreciate and love you dearly and I think we will have made you proud with this EP!
The Beginning Of New Endings
1. Playing With Fire
2. Love Is War
3. Silver Lines
4. Heart Of Gold
5. Tiny Weapons
Pre-orders are available now at https://madinalake.probitymerch.com/. All fans who pre-save the EP or pre-order a bundle will receive an extra bonus track on release, as well as instant downloads of existing singles ‘Playing With Fire’ and ‘Heart Of Gold’, plus subsequent tracks as they are released once a month. A special bundle edition includes a very limited edition 12” vinyl, poster, collectable laminate, and t-shirt featuring the EP artwork. 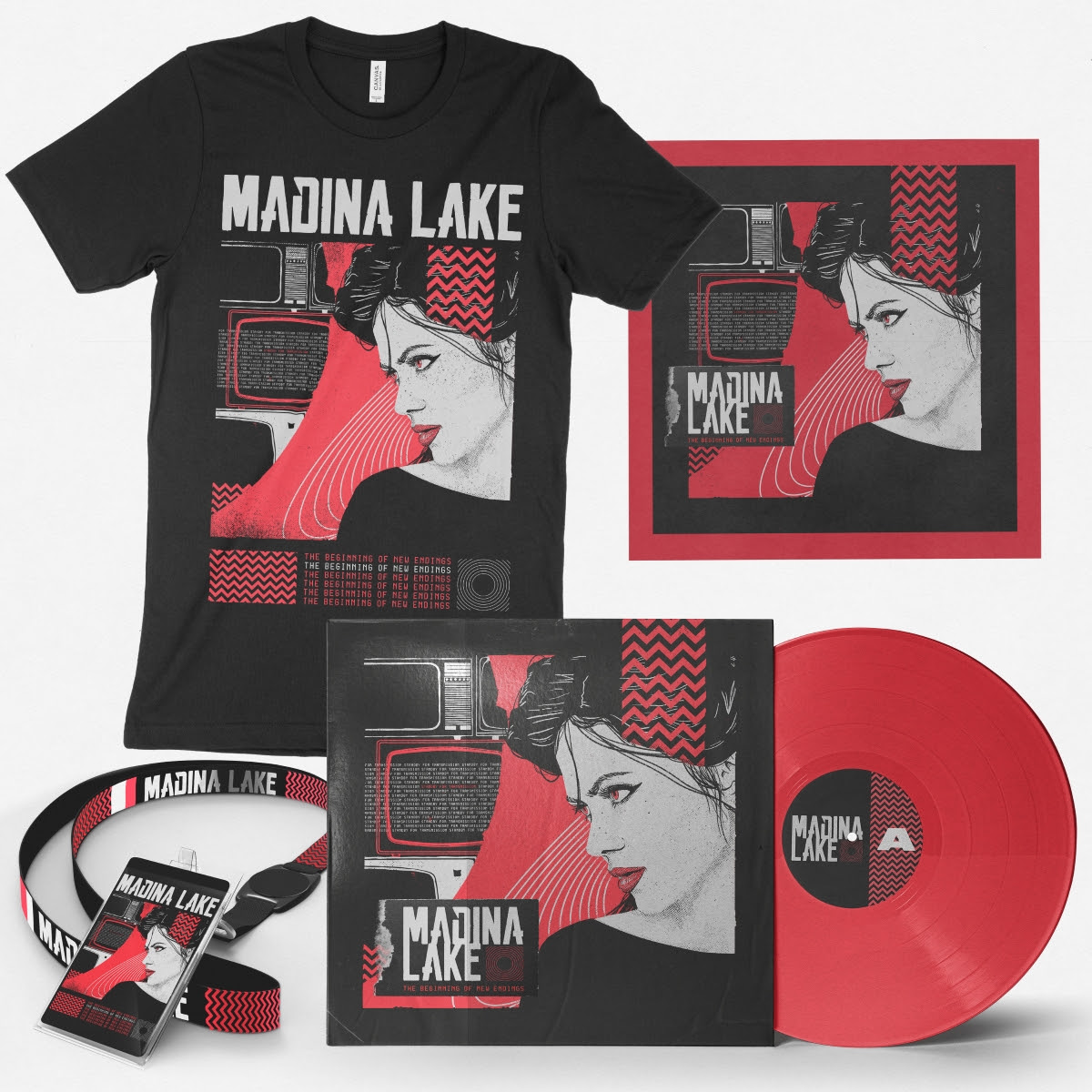