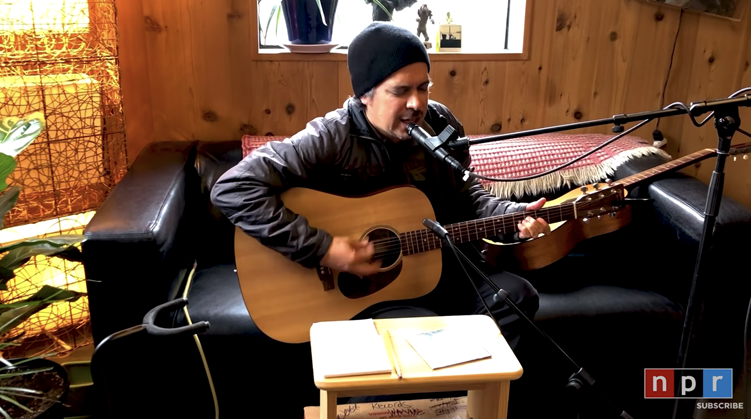 “The relaxed pacing, Ward’s intimate vocals and tips of the cap to Hank Williams, Elvis Presley and the sounds of the West give the album a decidedly nighttime atmosphere, a drizzle of starlight that settles gently on the ears and the mind.” – Associated Press

“Ward employs the organic delicateness of his voice to tell these stories with a tender touch…Whether knowingly or not, Ward has made ‘Migration Stories’ a tonic to soothe our worried minds.” – No Depression

Since the April release of the album M. Ward has also remotely performed on The Late Show with Stephen Colbert and The Late Late Show with James Corden. On Colbert he performed the album’s title track, an eerily beautiful album opener that imagines a reunion beyond the boundaries of space and time; watch it HERE. On James Corden, Matt and Corden discuss the album’s immigration themes before Ward’s performance of “Unreal City” begins. A track that searches for peace in a post-apocalyptic swirl of synthesizers, watch the performance HERE.

A prolific writer, producer and performer, M. Ward has established himself as one of modern American music’s most unique and versatile voices. Recorded at Arcade Fire’s Montreal studio, Migration Stories is languid and hazy, blurring the lines between reality and fantasy as it reckons with a world that feels more divided than ever before, even as its inhabitants grow more inextricably linked by the day. Ward’s delivery is tender and gentle throughout the album’s eleven intimately rendered meditations, but there’s an undercurrent of darkness floating just beneath the surface, a persistent sense that the end may be closer than any of us dare to realize.