Amid the crisis of the world, if there’s one thing to help ground you, it’s the music if the band’s you love and the ones you may not have heard yet. So whether you’ve never heard of this band or you’re a long time follower, there’s something new about to be released to raise your spirits and get you through the solitude of working from home!

Lucifer ​is back after a 2-year break of touring and writing with their 3rd album ​Lucifer III​. Hailing from Stockholm the band fronted by ​The Oath​ front woman ​Johanna Sadonis, ​has a very distinct sound and style. Taking heavy influence from the big 70’s Heavy Metal bands such as ​Black Sabbath, Deep Purple ​, and ​Blue Öyster Cult​, they are a breath of fresh air on the scene.

Lucifer III is everything we’ve come to expect from the band with their dark and classic sound. The first single “Ghosts” comes in with such a strong beat you can’t help but get sucked in and ​Sadonis’ ​vocals have you wanting more. Her distance style carries that 70’s feel while the guitar riffs and solos take on that darker sound while remaining upbeat. Their namesake track “Lucifer” pulls you in for a different reason though as the track starts with the bleat of a goat, just piquing your interest into what is coming next. What that is, is a fast-paced rhythm that continues throughout while the lyrics as you would imagine the talk about the fallen angel himself. Each track on the album carries that same old school style while being up to speed with the current music scene. The blends if the intricate guitar sounds with the strong steady beats all beneath stunning vocals really is quite incredible.

So if you want a new band that carries all the tricks and styles of those classics you love then ​Lucifer​ are the band for you. Carrying that darkness of the likes of ​Sabbath​ while remaining a clean sound, there really isn’t anything not to love about this band.

Lucifer III will be released in March 20th Via Century Media Records.

Make sure to catch them live on one of the following dates:

The Third Commandment – Europe 2020 – Part I
w/special guests: Year Of The Goat 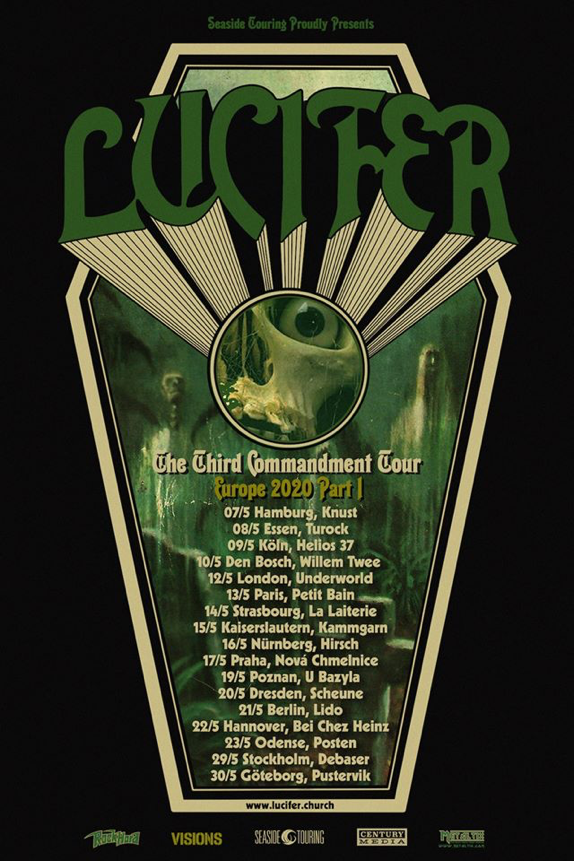