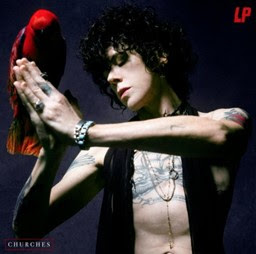 LP’s highly anticipated sixth album CHURCHES will be released on December 3rd via SOTA Records. In the past year and a half, the singer-songwriter, who has more than two billion streams to their name, released five singles from the album which now have a combined 80M streams/views. On release date, LP will debut a new song, “Conversation,” and an accompanying new video. Fans can view the new video on LP’s YouTube channel on December 3 (HERE).
“Conversation” was produced by Nate Campany (Tove Lo, K.Flay, Christina Aguilera) and Kyle Shearer (Becky G, Tove Lo, Carly Rae Jepsen) – collectively known as Valley Girl. About the song LP says, “‘Conversation’ is me trying to talk myself into staying in the relationship that I was in. Realizing that we just think differently & just wishing it could come down to a conversation that could fix things and just celebrating and feeling that love for that person and the optimism of feeling that a conversation could fix everything.”
The video was directed by Stephen Schofield. LP describes the video as “This video was much like the ‘Angels’ video where we shot these lyric videos, and I just was playing. I was just fun that the concept of two people having a conversation, are both myself. Me being in two different outfits and one of me was not hearing, or not understanding, and beating their head against the wall, that just kind of happened. It was a super-spontaneous way showing that I’m constantly having these conversations in my own head, with myself. The good and the bad.”
The lush and captivating Churches was executive produced by Mike Del Rio (Kylie Minogue, X Ambassadors, Skylar Grey). In addition to tracks produced by Del Rio and Campany, Churches includes production by Isabella Machine Summers (Florence + The Machine); Lars Stolfer (Health, Local Natives, Cold War Kids); two-time Grammy winner Dan Wilson (Adele, Pink, Leon Bridges, James Bay); and Dan Nigro (Olivia Rodrigo, Carly Rae Jepsen, Sky Ferreira). The album was mastered by multi-Grammy winner Emily Lazar (HAIM, Maggie Rogers, The Killers, Vampire Weekend, Coldplay). Digital, vinyl, CD and special t-shirt bundle album pre-orders are available now at https://lp.lnk.to/Churches.
About the album, Del Rio said, “This album was made in a time where human connection and community was put on hold, so subconsciously, we imagined this music being experienced as some sort of sweet release after a dark time. As LP’s community continues to grow, so does the palette of what works in the LP universe. It was made with a lot of love, sincerity, and friendship with the hope that it translated into a body of work to be enjoyed by all. As fluid and as genre-less as LP is, the music we make is always a pursuit of reflecting their philosophy with a message of love and connection at its center. “
Churches’ first single “The One That You Love” generated more than 24M YouTube views of the official video, 21M Spotify streams, and had its TV debut on “Late Night with Seth Meyers.” The album’s second single “How Low Can You Go” has 7M streams on Spotify, 6.7M YouTube views, and hit Triple-A radio’s Top 3 most added songs. The video for the third single, “One Last Time” co-starring actor/filmmaker/model Jaime King, racked up 16M YouTube views and 8.9M streams on Spotify.  LP’s “Goodbye” has generated 2.3M YouTube views and 2M Spotify streams. LP’s most recent single “Angels” has 1.1M Spotify streams and nearly 900K YouTube views.
CHURCHES TRACK LISTING:
1. “When We Touch” *
2. “Goodbye” *
3. “Everybody’s Falling in Love” *
4. “The One That You Love” *
5. “Rainbow” ~
6. “One Last Time” *
7. “My Body” ^
8. “Angels” @
9. “How Low Can You Go” *
10. “Yes” #
11.“Conversation” %
12. “Safe Here” +
13. “Can’t Let You Leave” $
14. “Churches” !
15. “Poem” *
*    Produced by: Mike Del Rio
~   Produced by: Mike Del Rio, Nate Campany
^   Produced by: Mike Del Rio, Nick Leng
@ Produced by: Mike Del Rio, Valley Girl
#  Produced by: Lars Stolfer
% Produced by: Valley Girl
+  Produced by: Daniel Nigro
$  Produced by: Mike Del Rio, Isabella Machine Summers
!   Produced by: Mike Del Rio, Dan Wilson
LP’s European dates for their 2022 headlining world tour in support of Churches will kick off on January 21st at the O2 Academy in Leeds, England, and conclude after 30 dates across the continent on March 13th at Paris, France’s Salle Pleyel. Among the highlights of the European dates is a return to Crocus City Hall in Moscow, where LP recorded their 2020 live album Live In Moscow in front of a sold-out crowd of more than 6,000 fans. A month later, LP will hit the road for U.S. dates, beginning on April 14th in Portland, Oregon at the Roseland Theater. The 29-day run includes shows at LA’s famed Greek Theatre, two concerts in NYC, The Ryman in Nashville, Stubbs in Austin, and more, before concluding on May 22 in San Diego.
2022 TOUR DATES
LP has released five albums and three EPs – including 2020’s Live In Moscow; 2018’s Heart to Mouth, featuring single “Girls Go Wild” that was Italy’s most-played radio hit of 2019; and 2016’s breakthrough Lost On You featuring the global smash title track that reached No. 1 in 18 countries and was Diamond-certified in France, plus Platinum in Greece, Italy (4X) and Poland. Their songwriting credits include hits for Rihanna (“Cheers (Drink To That)”, Rita Ora (“Shine Ya Light”), Cher (“Pride,” “Red”), Backstreet Boys (“Love Will Keep You Up All Night”), Leona Lewis (“Fingerprint”), Céline Dion (“Change My Mind”) and Christina Aguilera (“Beautiful People”). LP’s YouTube channel receives more than 2.4 million views a day and their songs are streamed in excess of 2 million times daily across all DSPs.
Follow LP:
Website – Facebook – Twitter – Instagram – YouTube – Spotify – Apple Music