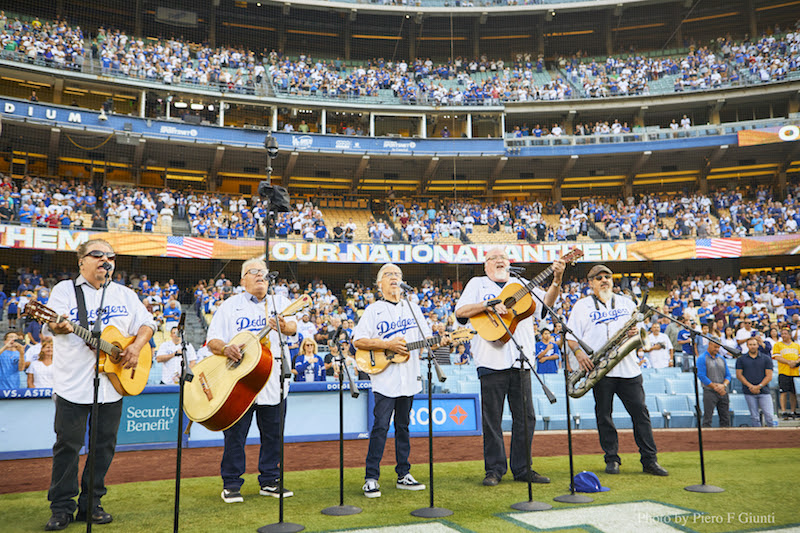 Los Lobos at Dodger Stadium by Piero F Giunti
Los Lobos will return with Native Sons tomorrow via New West Records. The 13-song set was produced by Los Lobos in East Los Angeles and finds the band mapping their musical DNA as a kaleidoscopic selection of tribute songs from their homeland, ultimately creating a crucial snapshot of L.A.’s musical heritage. Having formed in 1973 and gotten their start playing spirited renditions of Mexican folk music at parties and in restaurants, Los Lobos are no strangers to reinterpretation (and if you’ve ever been to one of their legendary live shows, you already know that). These brothers have always held a deep appreciation for diverse music, and they love pulling out old gems and making them shine like new. Met with critical acclaim, The Associated Press said, “The adventurous song selections make the album a celebration of diversity, and a showcase for Los Lobos’ marvelous versatility…It’s true roots music.” David Fricke said in his 4 out of 5 Star MOJO review, “Pin Ups en Espanol: East LA’s greatest dance band hosts a ‘covers’ party,” American Songwriter said in their 4 out 5 Star review, “…What’s here is consistently inspirational,” and Uncut Magazine awarded the album 8 out of 10 stars. Mother Jones said “They are a national treasure,” while the actor, comedian, and podcast host Marc Maron exclaimed “Los Lobos makes almost all other bands look like novelty acts.”
For all the trailblazing musical acts who’ve emerged from Los Angeles, very few embody the city’s wildly eclectic spirit more wholeheartedly than Los Lobos. Over the last five decades, the East L.A.-bred band has made an indelible mark on music history by exploring an enormous diversity of genres—rock-and-roll and R&B, surf music and soul, mariachi and música norteña, punk rock and country—and building a boldly unpredictable sound all their own.
In a nod to their neighborhood, Native Sons opens with the wide-eyed frenzy of “Love Special Delivery” by Thee Midniters, an East L.A. garage band and one of the first Chicano rock groups to ever score a major hit in the U.S. From there, it features favorites and deep cuts by other Los Angeles luminaries such as the Beach Boys, WAR, Buffalo Springfield, Jackson Browne, The Blasters (whom counted Steve Berlin as a member before his joining Los Lobos) and more.
Today, SPIN has shared the video for the album’s title track, “Native Son.” The album’s sole original song is a loving homage to Los Angeles that sounds right at home amid so many classic tracks. The video was previously premiered on the jumbotron at Dodger Stadium last Friday night ahead of the band’s performance of the national anthem which kicked off the World Champion Los Angeles Dodgers home game.  The “Native Son” video was partially filmed in Lincoln Heights, one of the oldest neighborhoods in East L.A. and directed by Piero F Giunti & Jon Luini. See The “Native Son” Video Here.
The National Endowment for the Arts also recently named Los Lobos a part of its newest class of National Heritage fellows. The honor recognizes individuals and groups who represent the richness and breadth of America’s folk and traditional arts and supports their continuing contributions to our nation’s traditional arts heritage.
As with all of their catalogue, Native Sons reveals Los Lobos’ ability to merge genres and styles with both sophistication and playful spontaneity, an element that’s perfectly reflected in the album’s unbridled joy. “I played it for a friend and his first response was that it’s a party record—which sounds right to me,” says Hidalgo. Beyond that undeniably feel-good quality, Native Sons essentially serves as a love letter to Los Angeles and the endless possibilities to be found when all boundaries are shattered. “I couldn’t say there’s a common thread for all these artists, but in a way that’s exactly what makes L.A. great,” says Berlin. “You’ve got R&B and punk rock and rock-and-roll and folk, and somehow it exists together in this one weird city that we all call home.”
Los Lobos have also announced 2021 & 2022 tour dates in support of Native Sons. The extensive tour includes a special Costa Mesa show with X & The Blasters on August 1st, as well as performances with The Mavericks, Emmylou Harris, Steve Earle & The Dukes, and the Tedeschi Trucks Band. Please see all Los Lobos dates, with more to be added, below.
Quickly finding their footing in L.A.’s punk/college-rock scene, Los Lobos began sharing bills with bands like Public Image Ltd. and the Circle Jerks. After making their major-label debut with 1984’s critically lauded How Will the Wolf Survive?, they went on to achieve such triumphs as contributing a smash-hit cover of Ritchie Valens’s signature song “La Bamba” to the 1987 biopic of the same name, winning three Grammy Awards, collaborating with the likes of Elvis Costello and Ry Cooder, and earning massive worldwide critical acclaim.
Los Lobos’ Native Sons will be available across digital platforms, compact disc, and standard black vinyl. The Double LP vinyl editions are housed in a gatefold sleeve and feature three sides of music and a custom etching on its fourth side.  A Coke Bottle Clear Vinyl Edition limited to 4,000 copies worldwide will be available at Independent Record Stores while a Brown Vinyl Edition limited to 1,000 copies is available NOW via New West Records.
Los Lobos Still Are: David Hidalgo (vocals, guitars) – Louie Pérez, Jr. (vocals, guitars) – Cesar Rosas (vocals, guitars, bass, Hammond B3 organ) – Conrad Lozano (vocals, bass) – Steve Berlin (saxes, midisax, keyboards) 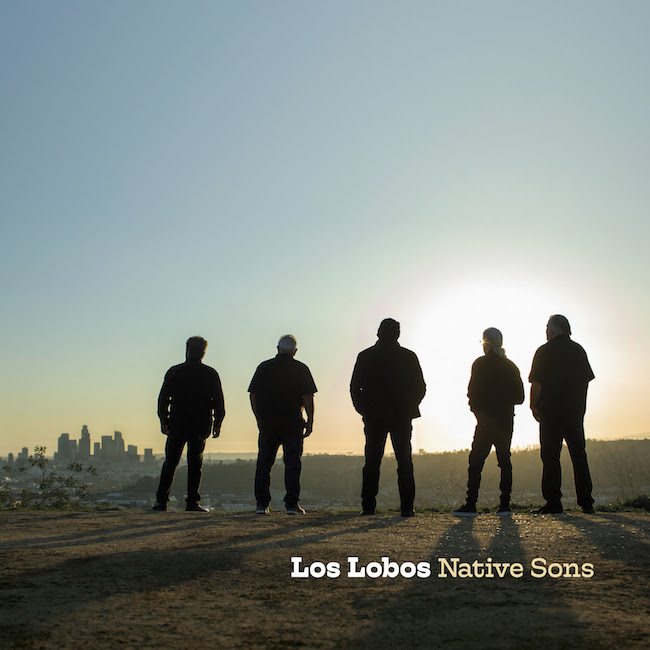