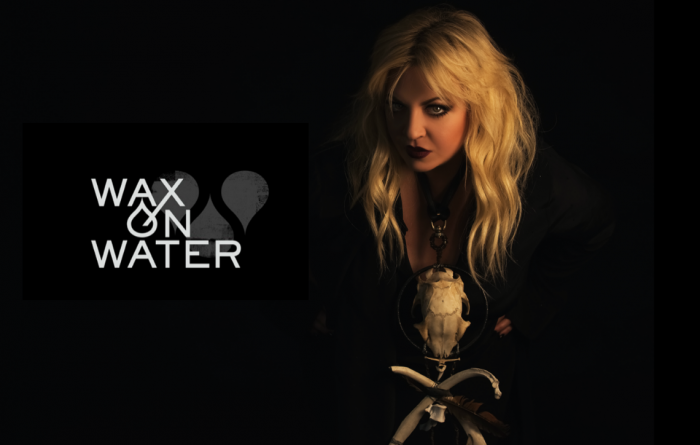 THE FULL NEW ALBUM WILL BE RELEASED MAY 2022

THROUGH HOWLING TEMPEST RECORDS / THE ORCHARD

Wax on Water are an Alternative Rock band hailing from Camden, London, UK, that draw from grunge, electronica, and industrial sounds, mixed together with layers of strings, piano and intense guitars, to make a heady and unique ‘Electro-Grunge’ sound that is all their own. All songs are written, performed and produced by lead singer Maya Damaris with Steven Blessing working his dark magic on guitar. The band are set to release brooding new single “Seventh Son” on 17th September 2021 with a strategic ‘drip, drip, drip’ single releases to follow, with “The Drip Part” EP being released on 12th November, followed by later releases, and culminating in their full album “The Drip” – set to land in May 2022.

Maya Damaris is a multi-faceted creative talent: not only is she a consummate singer, performer and a versatile multi-instrumentalist, she also writes and produces all the musical output for the band. Originally from London, Damaris was a classically trained pianist and singer but started Wax on Water in 2012 because she “…wanted to create music that causes a reaction in people, in the same way that the grunge, rock and industrial bands that I grew up loving did to me”.  Her influences are eclectic but classic: the Motown greats, Blues singers like Dinah Washington and Billie Holiday, pop and rock ground-breakers Bowie, Pink Floyd, Led Zeppelin, Kate Bush and Iggy Pop. Later, inspiration arrived in the form of experimental electronica: Kraftwerk, CAN, Laurie Anderson and Throbbing Gristle as well as metal, grunge and industrial bands My Bloody Valentine, The Cure, Soundgarden, Slayer and Nine Inch Nails. Maya expertly weaves all these formative influences to create the unique sound for Wax on Water.

Hailing from South-East London, prodigious guitarist Steven Blessing became a professional guitarist by the age of 15. After getting a music degree he started touring with the rock band Estrangor, for which he was the founder and main songwriter. Since then, he’s performed with a wide range of bands and worked in the studio with a variety of independent artists before joining Wax on Water in 2019. Steven’s guitar playing is heavily influenced by the classic rock and metal guitar greats Jimi Hendrix, Dimebag Darrell, Randy Rhoads and Jimmy Page.

Wax on Water’s 2018 debut album “Procession” was a critically acclaimed album of seven songs of admirable diversity evoking the raucous grit of Queens of The Stone Age and Nine Inch Nails, to the rootsy goodness of The Black Crowes and beyond, all infused with Damaris’ inherent grungy flair. The positive reaction to this promising debut helped the band to secure a distribution deal with The Orchard/Sony Music for their own Record label, Howling Tempest Records.

Forthcoming album “The Drip” is a collection of 16 songs that takes the band’s previous successes and, with Blessing now firmly on board, adds an extra layer of guitar energy. Drums for the album were played by LA session drummer, Garren Orr (YolkLore, Tennis System) and the record was mixed at MooseCat Studios, LA and mastered by Will Borza at the Grammy Award Winning Howie Weinberg Mastering Studios, LA.

The single “Seventh Son” was written by Damaris in a hotel room in Los Angeles and then recorded in London in the summer of 2020. The track follows the ambitious and intriguing reimagining of the O’Jays Philadelphia Soul classic “For the Love of Money” as the second release from the album and is about the dark descent of a relationship. As Demaris says herself: “Seventh Son is about how a relationship can turn from being something that makes you feel alive to making you feel less than…it’s about reclaiming yourself when you’re standing on the shadow side of love.”