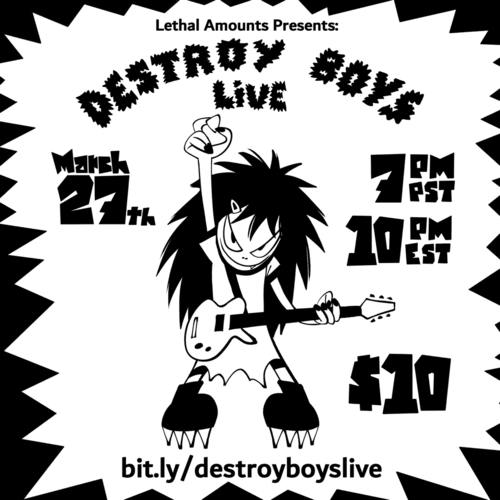 TICKETS AVAILABLE :  HERE
Los Angeles art gallery, promoter, and connoisseur of cool Lethal Amounts is excited to announce their debut concert film with Hopeless Records and  San Francisco Bay Area Destroy Boys taking place March 27th at 7pm PT.  Lethal Amounts founder Danny Fuentes has built a reputation as the torchbearer of the counterculture, celebrating the cultreshifters of the past while championing up-and-coming creatives. The gallery has become a living and breathing history lesson of Punk Rock with photo exhibits from Leee Black Childers, the official photographer of Andy Warhol’s Factory to legendary Los Angeles photographer Edward Colver, who is best known for capturing some of the most iconic images of the hardcore punk era in Los Angeles.  Destroy Boys Live will be Fuentes’ directorial debut.
“For outsiders and outliers, Danny Fuentes’ gallery is a place to call home.”
– The Los Angeles Times
Destroy Boys are a three-piece band founded by Violet Mayugba (guitar/vocals) and Alexia Roditis (vocals/guitar). Rounded out by drummer Narsai Malik they have been redefining West Coast punk, making waves from the California shoreline to the UK, sharing stages with up and coming bands like Mannequin Pussy as well as punk stalwarts such as Face To Face and Lagwagon. They’ve also racked up over 40 million streams, with the numbers ticking upward every day without fail. Their visceral personal tales of scene bullies, elitist cliques, betrayal, and unrequited love have won over the hearts and ears of eager listeners ranging from the fervent teens who pack out their shows to Green Day’s Billie Joe Armstrong (see his mention in the Rolling Stone cover story HERE via Instagram HERE).
The band just released their searing new single “Muzzle,”  through their new label partner Hopeless Records,  that Alternative Press called “Ferocious”  and RockSound commented that with “less than a minute in length and packed tight with thrashing guitars and barked vocals, it’s a kick to the temple that is simply impossible to ignore,”  The song has been added to the top punk and alternative rock playlists on streaming services all around the world, was added to SiriusXM’s Faction channel and has received early spins on numerous radio stations in Europe.
“Destroy Boys aren’t playing nice in “Muzzle,” kicking ass and taking names in the high-energy new single about fighting back against the powers that be. Turn this one all the way up.”
– Refinery 29
The single was just a taste of what’s come. The band has been working on a new album and after 2020 that promised tours with Against Me! and Vundabar, as well as a slot on the Sad Summer Festival, the Livestream offers up a front-row treat for fans who haven’t seen the band live in a year, with incredible live performances of the new single “Muzzle,” fan favorites such as “Fences,” and “Duck Eat Duck World” that was featured in Tony Hawk Pro Skater 1 + 2.  In addition to the performances, the film gives a look into the recording process and intimate interviews with the group on how they got their start playing shows and touring while they were in high school.
This is not the band’s first foray into collaborating with Lethal Amounts.  Earlier this year Destroy Boys launched their second merch collaboration with Lethal Amounts (See HERE)  so working with Fuentes on the Livestream was a natural fit.   “Lethal Amounts was an absolute joy to work with,” says Roditis. “Danny has a wonderfully creative vision and we loved collaborating with him on this project. He let us be free and be ourselves while inputting his slick and unique twist on things.”
“To me,  Destroy Boys have that feeling of timelessness, says Fuentes. “I’ve seen them live and I got chills up my spine watching a band I knew no songs to yet. They just took me to another place in my mind, probably to that place when music and concerts were so new and exciting as a kid. They have something eternal about them and I wanted to capture a bit of that essence in a film and not just another  “live-stream” in a pandemic kinda world. Their energy is intoxicating and their self-awareness is inspiring. I felt it was important to not just see them perform but see them as artists in the process of creating as well as giving us a glimpse of their personal philosophies.”
KEEP UP WITH DESTROY BOYS
Press Materials: http://smarturl.it/DestroyBoysPR
https://www.destroydestroyboys.com/
https://www.instagram.com/destroyboysband/
https://www.facebook.com/destroyboys
ABOUT LETHAL AMOUNTS
Our humble beginnings start with a logo, our now infamous Lethal Amounts “LA Safety Pins”, helped launched the name and image of the brand. Lethal Amounts began as a clothing line predominantly focussing on graphic t-shirts being hand screen printed.  With their first brick and mortar store, they launched the gallery that quickly bloomed into a haven for outsiders and confrontationists.  Lethal Amounts showcases the extremes of individuals who have moved culture forward, living on the edge outside of societal norms and challenging traditional views on sexuality.  Rock ’n Roll of the past has crossed over into pop culture fanaticism, street culture influences, and cult hero worship. Artists who have shown in the gallery include Leee Black Childers (the house photographer for Andy Warhol’s Factory), famed punk rock photographer Edward Colver, Nick Zinner from the Yeah Yeah Yeahs, Al Jourgensen, Psychic TV and more. Additional highlights include the Nick Cave Smoking exhibit, Spiritual Cramp : Christian Death exhibit and documentary launch, Shawn M. Crahan (of Slipknot’s) His Whores exhibit, an Anton LaVey event featuring an exhibit of photography and ephemera from the colorful, and notorious cultural icon, Goodbye Pogo: The Art of John Wayne Gacy and Once Upon a Time in 69′ : The Life of Charles Manson.
www.lethalamounts.com
www.facebook.com/lethalamounts
https://www.instagram.com/lethalamounts