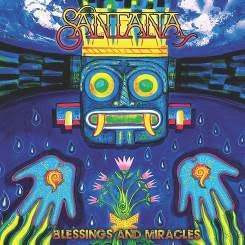 The third single from his star-studded new album, Blessings and Miracles, due out Oct. 15 on BMG

LISTEN TO “WHITER SHADE OF PALE”

Multi-Grammy Award-winning Rock and Roll Hall of Fame guitarist Carlos Santana will release the third single off his star-studded, masterful new album, Blessings and Miracles (out via BMG on October 15), a collaboration with the legendary vocalist, guitarist, keyboardist, Grammy winner and BMI Icon Steve Winwood on the classic “Whiter Shade of Pale.”

Taking on a classic is sometimes risky, but Santana’s pairing with fellow legend Steve Winwood on the Procol Harum gem “A Whiter Shade of Pale” puts all fears to rest. It’s a resplendent, marvelously realized retelling, a nourishing hymn for the modern age, on which the two musical giants discover new pockets of beauty at every turn. As it was on the original, there’s an elegiac feel throughout, but there’s also a romantic element that never existed before. Winwood’s voice, a wondrously singular instrument, is stirring and deeply moving, and Santana channels Matthew Fisher’s original organ lines on guitar with reverence while putting his own unique stamp on the timeless melodies. With each passage, he lifts us higher and higher into bliss.

Santana recalls how he and Winwood were at a show in London’s Hyde Park, and he went up to him and suggested they record the song. “I said, ‘You and I have to do it, but we’re going to do it very sexy, like a Hare Krishna but with congas.’ I played the components in his ear, and he said, ‘I hear it, Carlos. You’re right.’ So that’s what we did – it’s Santana, Cuban, Puerto Rican in an African way. And man, you talk about sexy. Steve’s voice is so sexy and beautiful.”

Winwood says, “Carlos has been doing what I’ve been trying to do for the last fifty years, namely combining elements of rock, jazz, folk, and Latin Afro-Caribbean music. Carlos’ genius comes in large part from a wonderful combination of rock music with Latin-Cuban rhythms. I’ve played with Carlos on numerous occasions over the past fifty years and I’m very excited to be working with him again still.”

Blessings and Miracles is one of the most ambitious, inspired and magical albums of Santana’s storied career, on which the legendary guitarist aims higher than ever. “The title of this album comes from my belief that we’re born with heavenly powers that allow us to create blessings and miracles,” Santana says. “The world programs you to be unworthy of those gifts, but we have to utilize light, spirit and soul – they’re indestructible and immutable. Those are the three main elements on this album.”

For more than five decades – from Santana’s earliest days as a groundbreaking Afro-Latin-blues-rock fusion outfit in San Francisco – Carlos Santana has been the visionary force behind artistry that transcends musical genres and generational, cultural and geographical boundaries. To date, Santana has won ten Grammy Awards and three Latin Grammys, with a record-tying nine Grammys for a single project for 1999’s Supernatural (including Album of the Year and Record of the Year for “Smooth”). He has received the Billboard Century Award (1996), was ushered into the Rock and Roll Hall of Fame (1998), received the Billboard Latin Music Awards’ Lifetime Achievement honor (2009), and was the recipient of the Kennedy Center Honors Award (2013). Among many other distinctions, Carlos Santana has been cited by Rolling Stone as #15 on their list of the “100 Greatest Guitarists of All Time” and has joined the Rolling Stones as one of only two bands to have an album reach the Top 10 in every decade since the 1960s. In 2018, he released his first MasterClass, and recently celebrated three epic milestones – the 20th anniversary of his groundbreaking album Supernatural, the 50th anniversary of his legendary performance at Woodstock, and the 50th anniversary of his masterpiece Abraxas.

Singer-songwriter, legendary vocalist, guitarist, keyboardist, mandolin player, producer, Grammy winner and BMI Icon Steve Winwood has sold over 50 million records in the course of his five-decade career. His compositions include “Gimme Some Lovin’”, “Back In The High Life Again”, “Can’t Find My Way Home”, “Arc Of A Diver”, “Higher Love”, “Roll With It”, “While You See A Chance”, “Dear Mr. Fantasy”, “Split Decision”, “The Finer Things”, “Valerie”, and “The Low Spark Of High Heeled Boys”, among many others. Named one of the ‘Greatest Singers Of All Time’ by Rolling Stone Magazine, Winwood is a recipient of the Ivor Novello Outstanding Song Collection, the BMI Icon Award, the Musicians Union Classic Rock Award, the Nashville Symphony Harmony Award and has been nominated for 11 Grammys, winning two. Steve has received Honorary Doctorate degrees in Music from Berklee College of Music, Aston University in Birmingham, England; and from The University of Gloucestershire. In 2004, Traffic was inducted into the Rock and Roll Hall of Fame, and the following year, he was honored for his “enduring influence on generations of music makers” by BMI. In 2002, he had the distinct honor of performing at The Golden Jubilee of Elizabeth II at Buckingham Palace, a concert marking her 50 years as queen; he also performed for President Obama at the 2013 Kennedy Center Honors in Washington, D.C. On June 5th 2014, he was inducted into the Walk of Fame in Nashville, TN.