Search
Home
News
LACUNA COIL PREMIERE NEW SINGLE “SAVE ME” FROM BLACK ANIMA WITH BILLBOARD
BLACK ANIMA OUT OCTOBER 11TH
Italian Alt-Metal superstars Lacuna Coil are premiering their new song “Save Me” today with Billboard. Check out the track HERE. The song is off the band’s forthcoming full-length album Black Anima out October 11th.
“Save Me” is the third and final single to be released off of the upcoming LP, following the previously released tracks and music videos for “Reckless” and “Layers Of Time“. Both music videos were directed by Roberto Saku Cinardi and are part of the same storyline.
Black Anima is the follow up to Lacuna Coil’s Delirium (2016), which debuted on the charts in the US at #16 Current Album Chart and #2 Hard Rock Chart, and on many charts in Europe. The album will be available as Ltd. 2CD Book Edition incl. tarot cards, Standard CD Jewelcase, black LP + CD and digital album (+Bonus Tracks). All formats are available for pre-order HERE.
Lacuna Coil is currently on the road with All That Remains for their co-headline U.S. tour. For more information on upcoming tour dates and to purchase tickets, visit the band’s website HERE.
Formed in 1994, Lacuna Coil quickly became one of Century Media’s biggest selling bands. From Comalies (2002) and Karmacode (2004) to Shallow Life (2009) and Broken Crown Halo (2014), the high-flying Italian act demonstrated an uncanny ability to pull in rock, gothic, and metal audiences. The band’s spirited and lauded live performances have also earned them a solid reputation for a band that not only delivers night in/night out, but also a band whose stage performance reverberates long after the show is over. Indeed, Lacuna Coil’s heartfelt, heavy, melodic, and rhythmic metal-a hybrid of gothic, groove, and alternative-has created a rabid worldwide following. Whether it’s “Our Truth” and “Delirium” or “Nothing Stands in Our Way” and “Trip the Darkness,” Lacuna Coil’s dual-vocalist assault is immediately identifiable. New album, Black Anima, continues the Italian’s reign atop the metal stack.
Lacuna Coil is Cristina Scabbia (vocals), Andrea Ferro (vocals), Marco “Maki” Coti-Zelati(guitars, Bass Guitar, Keyboards and Synths), Diego DD Cavallotti (Guitars) and  Richard Meiz(drums). 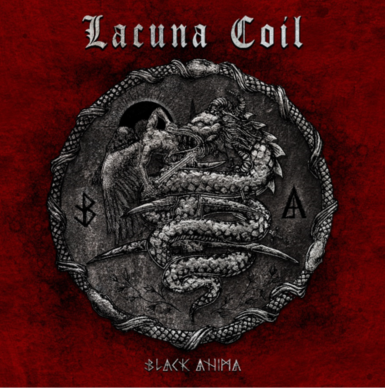