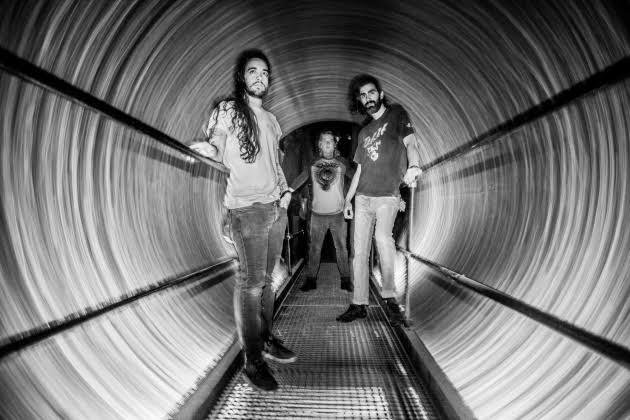 And Offers ‘Live at Freak Valley’ For FREE!

[ King Buffalo recording their new album in a Cave ]

While the second album, recorded live in a cave, is done and ready to be unleashed, the current worldwide situation at the pressing companies with a vinyl production delay, forced King Buffalo to move their upcoming releases to the Fall and into early 2022.

As the trio states: “Friends, We have good news, bad news, and more good news.

Good news: We recorded our second record LIVE in a cave! It will only have one single because it’s four 10-minute songs. If you like our long-form stuff (and caves), you’ll love this record!

Bad news: As you’ve probably seen, the whole world is experiencing massive vinyl production delays, so the 2nd Record won’t be released until late Fall of 2021. This also means we are pushing the third part of this album-trilogy into 2022.

But MORE good news: Because of this delay we’ve started on MORE ideas! We came up with a killer one recently and it’s going to be really unique. We can’t wait to reveal more in the coming months.

Bonus: ‘Live at Freak Valley’ is now FREE on bandcamp! Hopefully this will hold you over until we get closer to revealing more about the 2nd Record.”

King Buffalo‘s ‘Live at Freak Valley’ was recorded in 2019 and released as a one-time only pressing. The digital download is now available for free and exclusively via their Bandcamp page HERE!

The band’s latest album and first part of their trilogy, The Burden Of Restlessness, marked King Buffalo‘s most focused progressive offering to-date. The album, whose LP edition sold out quickly, not only continues to push their progressive aspects forward into new avenues of melody and exploration, but at the same time, it is not mistitled. There are deep undercurrents of frustration and even an aggressive pulse that coincide with the spaciousness for which the band has been so widely lauded since their 2016 debut, Orion.

While they are about to hit the road for an extensive US tour soon, including several dates with Clutch and Stöner, watch out for many more album details and updates about King Buffalo‘s epic trilogy to follow in the weeks ahead!