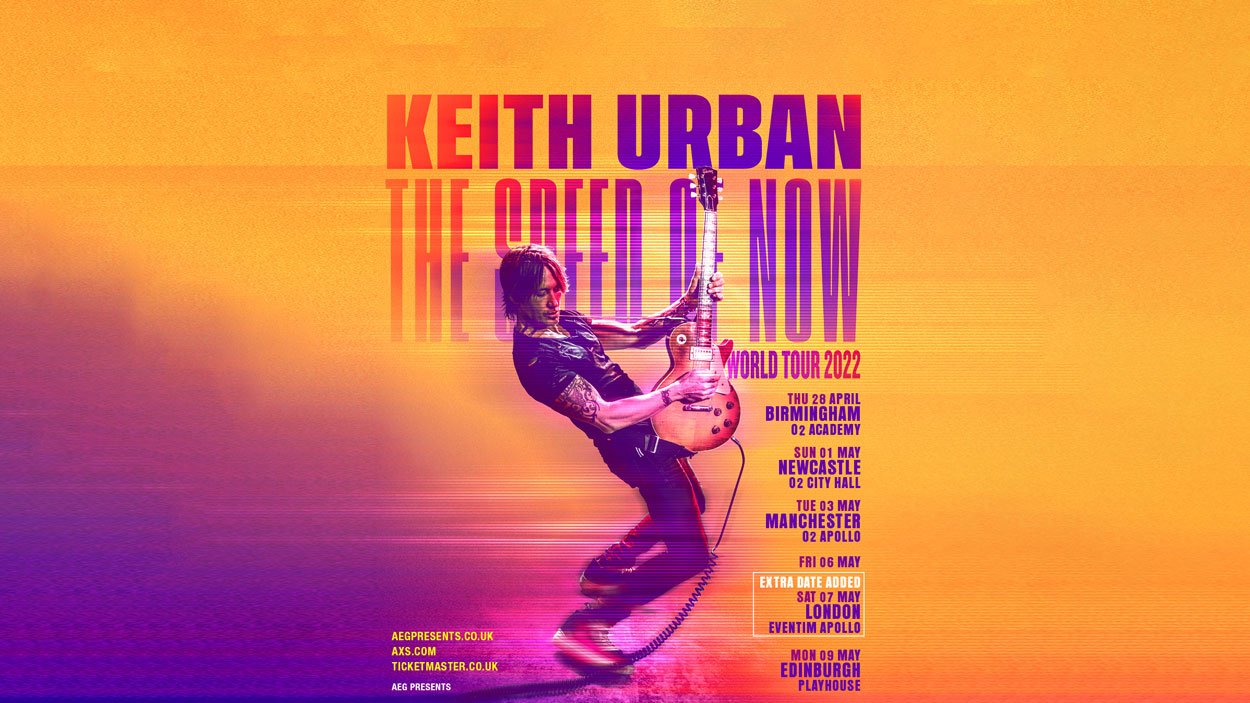 HIS FIRST TOUR HERE SINCE 2019

Due to incredible ticket demand, Keith Urban has announced a second London date to the run of his ‘THE SPEED OF NOW WORLD TOUR 2022’ next year. The UK leg of the tour kicks off on April 28 in Birmingham and will make stops in 5 cities around the UK including two London shows at the Eventim Apollo on 6 & 7 May 2022.

Tickets will go on general sale for the new date at 10am on this Friday 5 November. They can be purchased at TICKETMASTER.CO.UK or AXS.COM or AEGPRESENTS.CO.UK.

Critics around the globe have hailed Urban’s concerts as ‘ones not to be missed,’ as unpredictable as they are explosive, with no two shows ever alike and ‘THE SPEED OF NOW WORLD TOUR’  promises to be no different.  Combine hits from his career, including his global smash hit duet with P!NK, One Too Many, which has amassed over 400 million streams worldwide, Parallel Line, Blue Ain’t Your Color, The Fighter, Polaroid and Superman, with his infectious personality, virtuoso guitar playing, showmanship  and seemingly effortless spontaneity and together they make for one truly unforgettable night of music.

Keith commented: “I am so looking forward to returning to London next year, this city holds so many wonderful memories for me and I can’t wait to get back there and see my fans again.”

With ten full-length studio records, four GRAMMY® Awards, and millions of albums, songs, and tickets sold worldwide, Keith has wowed fans all over the world with his exhilarating live shows. One of the most well respected artists in the world, Keith has scored 24 career number ones and has sold more than 20 million albums worldwide as well as collaborating  with a diverse group of artists that include Post Malone, Taylor Swift, P!NK and Nile Rodgers,

May 7 London, Eventim Apollo – General sale on November 5th, 10am