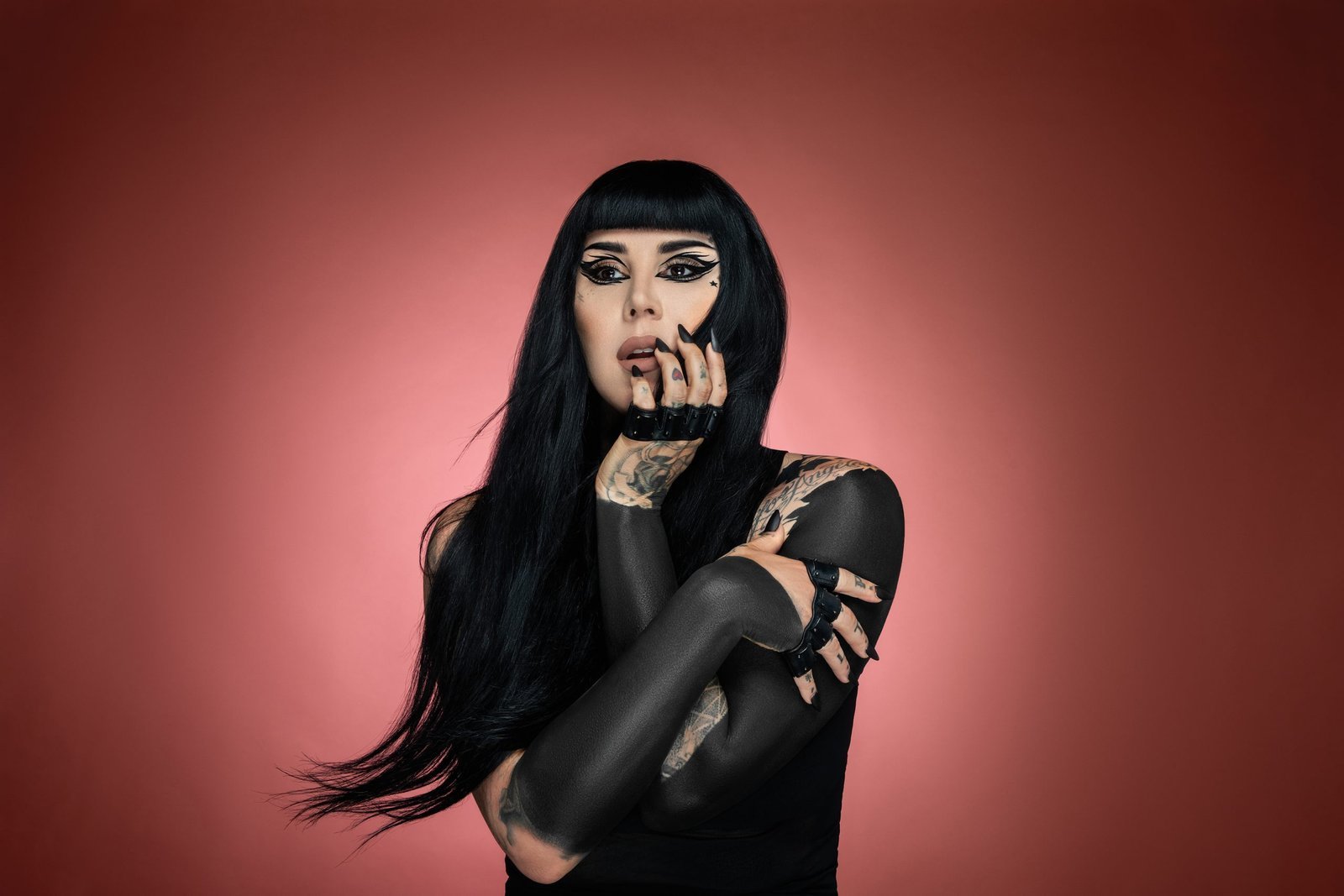 Press Shot – Photo Credits: @sequoiaemmanuelle
FOLLOW KAT VON D
KAT VON D WEBSITE || KAT VON D SPOTIFY || KAT VON D APPLE MUSIC || KAT VON D FACEBOOK || KAT VON D INSTAGRAM || KAT VON D TWITTER II KAT VON D YOUTUBE
Today, June 18 2021  Gifted multi-hyphenate Kat Von D shares vulnerable synthwave slow jam I Am Nothing, the second track from her forthcoming debut album, Love Made Me Do It, due August 27th and available for pre-order now. The pre-order of Love Made Me Do It includes limited edition signed red vinyl, red cassettes, CD digipack, hoodies with Kats signature star face tattoos on the hood, custom sketchbooks and much more. Other limited edition color vinyl variants are also available for retail. Listen to ‘I Am Nothing’  here – Watch the Lyrics Video here – Pre-order ‘Love Made Me Do It’ here.
Produced by Kat with the help of her band, I Am Nothing sees the talented artist at her most intimate and vulnerable, her fragile timbre coasts over sparse production and a dreamy beat before layers of synths open into a lush chorus. Its the ultimate 3am dance floor synthwave slow jam for an Anti-prom that never happened but all alternative teens have dreamed about since the 80s. A sad bop for goths’ broken hearts that will end up in their older sisters pop playlist.
I wrote the song for all of those whove ever felt not good enough, and Lord knows Ive been there, she goes on. I wrote it during a time where I was lost in someone, but more importantly lost myself along the way, and I think thats something many can relate to. Kat contemplates, wanting to be good enough for someone so badly, and somehow not measuring up. I believe theres strength in vulnerability, but this song begs the listener of how much one’s willingness to endure the things they cant have, she enthuses.
The new cut follows hot on the heels of debut single Exorcism – defined by Billboard as a darkwave bop about love, loss and change – which unveiled the album’s recurring theme, in Kats own words; Love Made Me Do It is a collection of all my hopeless romantic thoughts poured into one album. Talking to American Songwriter, Kat revealed; its being able to dip into those feelings of codependency or craziness but not actually live in it. Although most of the songs were written during a time of depression, thats definitely not where I want to live, but theres a beauty and vulnerability and a strength to that as well. Im not ashamed of writing out my faults. Im so full of them.
Love Made Me Do It sits at the core of Kats universe, proving that music is her first and strongest passion. Having been a classically trained pianist since her youth with a deep appreciation for music of all genres, Kat poured her soul into this long-awaited full-length debut album. The project features collaborators including Dave Grohl, Linda Perry, Dave Sitek (TV On The Radio), Peter Murphy (Bauhaus), Danny Lohner (Nine Inch Nails), Ladyhawke and Charo.
Long before the history-making tattoos, ubiquitous television shows, best-selling books and an influential beauty empire, Kat Von D sat down at a piano for nearly two hours a day and played. In essence, music became her first creative language and most trusted outlet. Classical training and a deep appreciation for music of all genres essentially underscored her life. She studied voice under Ken Tamplin six days per week, strengthening her vocals. In 2012, she began writing with GRAMMY® Award-nominated Linda Perry. Following this experience, Kat continued to write on her own, sitting at the piano and summoning songs from raw emotion. During 2014, she retreated to London to record the original mix of what would become her full-length debut album Love Made Me Do It (KVD/Kartel Music Group) before cementing it with her band  Gregg Foreman AKA Mr. Pharmacist (synth 1/Cat Power, The Gossip), Sammi Doll (synth 2/IAMX), Dave Parley (drums/Prayers), and Brynn Route (contortionist). They moved into a bungalow cottage on her property, lived together, and finished the record. Capping off the process, Dan Haigh of Gunship handled mixing. A pastiche of shapeshifting analog synths, post-punk dreamscapes, gothic hues, and shy pop magnetism, these eleven songs echo the eternal will of the perennially brokenhearted to love until death.
Tracklist for Love Made Me Do It:
1. Vanish Intro
2. Vanish
3. Enough
4. Exorcism
5. Protected feat. Peter Murphy
6. Fear You
7. I Am Nothing
8. Lost At Sea
9. Interlude
10. Pretending
11. Easier Sung Than Said
12. The Calling  Kat Von D new single ‘I Am Nothing’ Out Now, Debut Album ‘Love Made Me Do It’ out on August 27th
Listen to ‘I Am Nothing’  here – Watch the Lyrics Video here – Pre-order ‘Love Made Me Do It’ here