FOLLOW KAT VON D
WEBSITE || SPOTIFY || APPLE MUSIC || FACEBOOK || INSTAGRAM || TWITTER || YOUTUBE
November 12, 2021 – Today, gifted multi-hyphenate Kat Von D celebrates her exploration of the darker sides of love with the release of her ‘Exorcisms’ remix EP.  The EP features reworks of the haunting single by British synthwave pioneers  Gunship, darkwave favorite Cold Cave, French evocative synth pop purveyors Scratch Massive, and Kraftwerk’s Henning Schmitz aka n.e.o. An expanded Deluxe Remix EP with additional reworks will follow on November 30, to coincide with Kat’s global live stream event ‘The Love Made Me Do It Experience!’, in partnership with Moment House.
The remix EP follows Kat Von D’s acclaimed synth-driven debut LP, Love Made Me Do It, released on September 30.  In addition to the synth-laced lead single, ‘‘Exorcism’, other darkwave bops released include  ‘I Am Nothing’, ‘Enough’, and ‘Fear You’. The LP features collaborations with Dave Grohl, Linda Perry, Dave Sitek (TV On The Radio), Peter Murphy (Bauhaus), Danny Lohner (Nine Inch Nails), Ladyhawke and Charo.
On November 30, Kat Von D will debut her global livestream, ‘The Love Made Me Do It Experience!’, featuring her full band Gregg Foreman AKA Mr. Pharmacist (synth 1), Sammi Doll (synth 2), Dave Parley (drums), and Brynn Route (contortionist) performing a cinematic live show of songs from her critically acclaimed debut album.  The live stream, produced in partnership with Moment House, gives fans who missed Kat on her recent west coast American tour a chance to watch her and her band deliver their theatrical and powerful live performance. ‘The Love Made Me Do It Experience!’ also features a very special, intimate acoustic performance direct from Kat’s LA home. Immediately following the performance, fans will have an opportunity for a virtual afterparty, which will then be followed by a virtual  meet and greet with Kat Von D.
Of the exhilarating live show, Music Connection says, “From ‘Fear You’ to ‘Exorcism’ to ‘Enough’, along with a neon-colored smokey stage, Kat Von D and her band resurrect a musical spirit similar to that of The Cure mixed with Guns N’ Roses, and a touch of Joan Jett and the Blackhearts. Kat Von D is an act worth paying attention to; as her reason for doing this is inspired by love.”
Kat Von D and Moment House Partner For First Ever Global Livestream Event ‘The Love Made Me Do It Experience!’.
Showcases Live Performances of Songs From Kat Von D’s Debut Album and an Intimate Acoustic Performance From Kat’s Los Angeles House.
The Love Made Me Do It Experience After Party + Meet and Greet Packages available Monday, November 30, 2021 –

Ticket prices:
$15 for the Love Made Me Do It Experience
$7 for the virtual afterparty
$50 for virtual meet and greet

Debut Album ‘Love Made Me Do It’ Available on all Platforms:  Here 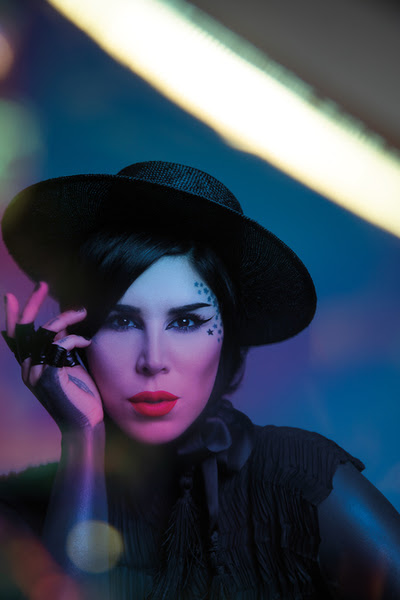 Download hi-res photo here
Media Praise for Kat Von D ‘Love Made Me Do It’ :
“A pastiche of shapeshifting analog synths, post-punk dreamscapes, gothic hues, and shy pop magnetism, these eleven songs echo the eternal will of the perennially brokenhearted to love until death.”
-Loudwire
“Kat takes listeners on a reflective journey which chronicles the rollercoasters of love and loss, rebirths and passings, and the hardships women face on a daily basis. The track embodies all the emotions from joy to pain to ultimately, hope.”
-Flaunt
“Intriguing and compelling debut album…Von D shows herself to be an artist to watch on “Love Made Me Do It” thanks to powerful songwriting that showcases a surprising vulnerability and intimacy.”
-Forbes
“‘I Am Nothing’ is a psychedelic dose of swelling, brooding dream pop. Co-written and co-produced by Von D herself, it evokes the sheen of the ’80s gothic synthwave that partially inspired her musical journey.
–Consequence
“Sound-wise, Von D’s music sits squarely in the goth/synthwave world, and ‘Fear You’ is a great showcase of her sonic talents. Over blinking synths, a snaky bassline and industrialized drums, Von D belts with a commanding coolness that would suggest she’s been making this kind of thing for a solid decade longer than she has.”
-Revolver Magazine
“a darkwave bop about love, loss and change”.
– Billboard
‘Exorcism’ is a sonic expulsion of the destructive nature of love, a recurring theme throughout Love Made Me Do It.”
-American Songwriter Magazine
“Along with a neon-colored smokey stage, Kat Von D and her band resurrect a musical spirit similar to that of The Cure mixed with Guns N’ Roses, and a touch of Joan Jett and the Blackhearts. Kat Von D is an act worth paying attention to; as her reason for doing this is inspired by Love.”
-Music Connection
“Kat Von D is the epitome of the term ‘artist’.”
-Young Hollywood
“Yes! Yes! Fucking yes! The song ‘Exorcism‘ is a real dark Synth Pop pearl with so much 80s vibes that I feel like a teenager again when listening to it.”
-Electro Zombies
About Kat Von D
Long before the history-making tattoos, ubiquitous television shows, best-selling books, and influential beauty empire, Kat Von D sat down at a piano for nearly two hours a day and played. In essence, music became her first creative language and most trusted outlet. Classical training and a deep appreciation for music of all genres essentially underscored her life. She studied voice under Ken Tamplin six days per week, strengthening her vocals. In 2012, she began writing with GRAMMY® Award-nominated legend Linda Perry. Following this experience, Kat continued to write on her own, sitting at the piano and summoning songs from raw emotion. During 2014, she retreated to London to record the original mix of what would become her full-length debut album ‘Love Made Me Do It’ (KVD/Kartel Music Group) before cementing it with her band—Gregg Foreman AKA Mr. Pharmacist (synth 1), Sammi Doll (synth 2), Dave Parley (drums), and Brynn Route (contortionist). They moved into a bungalow cottage on her property, lived together, and finished the record. Capping off the process, Dan Haigh of Gunship handled mixing. A pastiche of shapeshifting analog synths, post-punk dreamscapes, gothic hues, and shy pop magnetism, these eleven songs echo the eternal will of the perennially brokenhearted to love until death. It’s highlighted by standouts such as the first single ‘Exorcism’, ‘Protected’ featuring Peter Murphy of Bauhaus and produced and co-written with Danny Lohner (Nine Inch Nails, A Perfect Circle), and ‘The Calling’ capped off by never-before-heard recordings from original scream queen Vampira