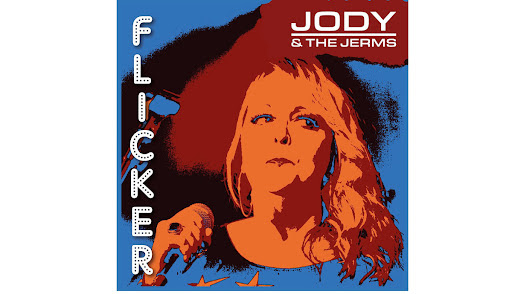 Today (4 March), JODY AND THE JERMS release the electrifying power/pop of their second album: ‘Flicker’.

STREAM THE ALBUM IN FULL HERE

Released via their own JATJ records imprint, ‘Flicker’ arrives less than 18 months after the surprise hit of their 2020 debut ‘Deeper’.

Much championed by the late Janice Long, Jody & The Jerms’ return has already received praise from When The Horn Blows who effused the band’s ability to “execute perfectly nostalgic and cheerful jangle pop”, whereas Oxfordshire Music Scene also lauded the new album as: “all exquisite… breathtaking stuff”.

Like resurfacing a lost reel of Super-8 from days long forgotten, ‘Flicker’ is as warmly nostalgic as it is endearingly pure. Nestling neatly somewhere between the pristine catalogues of Blondie, The Bangles and The Darling Buds, the Jerms deliver 13 fuzz-driven, love-lorn jangle-pop gems of the most classic kind.

Songs of lost-loves and first-loves, escapism and outsiderdom are spun with a sanguine innocence and vivid relatability; Jody’s sweet-natured vocal perfectly paired with the dynamic musical arrangements of the Jerms.

From the dizzying rush of “Spinning” and its surreptitious key changes, to the tick/tock tensity of the heart-palpitating “Sensation”, the ambitious ‘Out of Time’-era R.E.M. anthemia of Jody/Niall duet “Forever Running”, through to the tender Kirsty MacColl-tinted piano balladry of the closer “High Times”; on ‘Flicker’ the Jerms flit through styles and influences with a nimble elegance and agile ability. Recorded at Safehouse Studios in St Clements Oxford, ‘Flicker’ was mastered at Swift Mastering, with additional mixing by the band’s Peter James Millson.

The result is a suite of jangle-pop songs to rival the best. As endlessly repeatable as they are evocatively relatable, Jody & The Jerms’s ‘Flicker’ is out now. Available digitally, plus on CD and vinyl, the physical editions will also feature bonus tracks: “Since Yesterday” and “Shiver” (Janice Long Session Version).

In support of the release, Jody & The Jerms will also be heading-out on a tour of the UK and Spain in the Spring and Summer of 2022. Full UK dates and details are as follows, with more dates to be added soon: 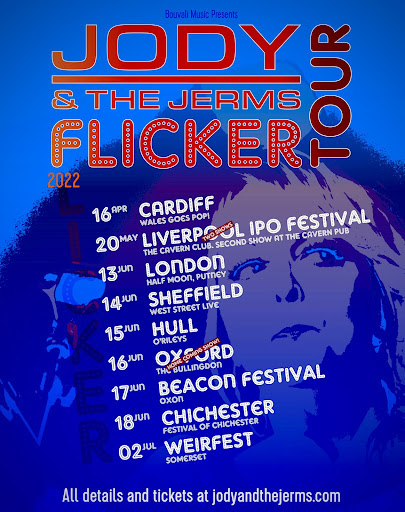