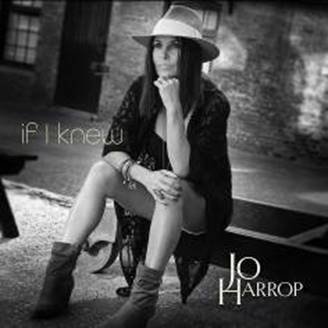 Stream ‘If I Knew’ HERE

Jazz singer & songwriter Jo Harrop releases the song ‘If I Knew’ on April 16th 2021, the first single from her hugely anticipated debut solo album, The Heart Wants, due for release in autumn 2021 via Lateralize Records. Following its plays on Jo Whiley’s BBC Radio 2 show the single is available to stream on all digital platforms and via Bandcamp HERE.

Written with pianist Paul Edis, and produced by Jamie McCredie at Gorilla Studios in Battersea, ‘If I Knew’ is a beautiful, world-weary ballad that immediately brings Burt Bacharach, Michel Legrand and Scott Walker to mind.

Following the release of her critically acclaimed Weathering The Storm album with guitarist McCredie, Harrop found herself in a reflective mood: “Like every other musician, my diary was empty, and I was sitting around feeling a bit lost with no gigs on the horizon. Instead of losing myself in daily life, I had space to think, and pretty soon I found myself writing the songs for this album without even really knowing it. It was the most incredibly creative time of my life.”

Due for release this autumn, The Heart Wants was produced by Hannah V (who made her name working with everyone from JP Cooper to Stormzy) and Jamie McCredie. Her first set of original compositions, the album features an impressive guest list including pianist Jason Rebello, bassist Christian McBride and drummer Troy Miller.

Born in Durham and raised on a heady musical diet of Nina Simone, Billie Holiday and Aretha Franklin, Jo Harrop cut her teeth as a session singer, working with a host of iconic artists including Neil Diamond, Rod Stewart, Gloria Gaynor and Enrique Iglesias.  After moving to London, she quickly established herself as one of the most unmistakable voices in British jazz, performing everywhere from the Royal Albert Hall to the Sunset Sunside Jazz Club in Paris.

Having signed to London-based jazz label, Lateralize Records, she received a raft of rapturous reviews for Weathering The Storm, her collaboration with McCredie. The Guardian dubbed it ‘a little gem of an album: simple, modest and perfect,’ whilst BBC 6 Music’s Iggy Pop fell in love with her voice, calling her “a very fine jazz singer”. Warm, smoky and capable of the most delicate dynamics, Jo Harrop’s mellifluous voice reveals an intimacy few singers are capable of generating. At times, she sounds as if she is living inside the songs, with each lyric a page from her diary.

“The loss of dear loved ones in recent years has opened my heart and given me more reason to sing and to write than ever before, which is why I felt the time was right to record my first album of original songs. I pour all of the sad stuff into my music and it somehow comes out in the way that I sing and write, so it really is a form of catharsis for me.”