TICKETS ON SALE FRIDAY, 27th SEPTEMBER AT 10AM 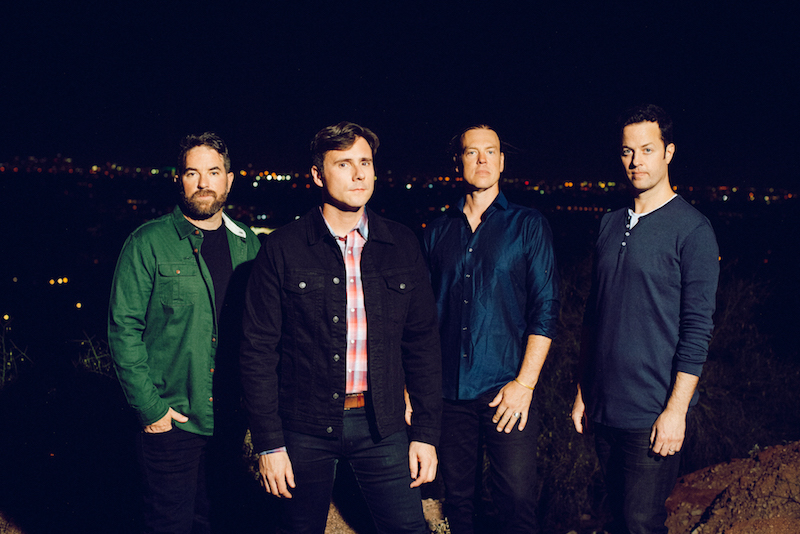 Jimmy Eat World today announce details of their 10th studio album Surviving, released on 18th October via The Orchard / RCA Records. The acclaimed Arizona four piece also reveal the first dates of Surviving, The Tour as well as a run of intimate UK shows for the week of album release.

Surviving is the band’s most personal, ambitious album to date and front man Jim Adkins once again proves himself as one of the most prolific songwriters in rock & roll.

As Adkins himself puts it, “Surviving explores some of the different kinds of weights my ego tells me I have to carry, what I see people around me choosing to carry and what I have found to be the truth when I choose to let go”.

Unveiled today, lead single “All The Way (Stay)” extolls the virtues of letting people discover the real you while exposing your vulnerabilities. As a heady rush of guitars give way to an irresistible middle-eight, Rachel Haden’s backing vocals and a saxophone solo lifted from the soundtrack of the-greatest-80’s-movie-John Hughes-never-made, ‘All The Way (Stay)” showcases the restless creative energy of a band at the peak of their powers.

Click here to listen to “All The Way (Stay)”, and here to watch the Daniel Carberry directed video

The band also released a newly recorded version of ‘Love Never’. Originally released last year as a limited edition vinyl-only single, ‘Love Never’ pits the realities against the expectations of love, a classic slice of Jimmy Eat World wrapped up in a three minute rush of towering guitars and crashing drums.

Click here to listen to the newly recorded version of “Love Never.”

The 10-track album, which was produced by the band and Integrity Blues producer Justin Meldal-Johnsen, is available for pre-order now (click here).  An exclusive white colored vinyl will also be available through Independent Record Stores and www.jimmyeatworld.com.  Additional merch bundles can also be found on the band’s site.

Surviving is a timely reminder of just why Jimmy Eat World are still selling out venues, headlining festivals and scoring top 10 albums as new generations of fans adopt their songs as the soundtrack to their lives.

In celebration of ‘Surviving’s’ release, Jimmy Eat World will perform a very special show at Pryzm in Kingston, Saturday, October 19th. Tickets are on sale this Friday at 11am BST here.

The intimate 3-4 hour experience will take place at Europe’s leading indie recording studio, Metropolis with a cocktail reception, a sneak peak behind the scenes of the studio, the recording session itself, a meet-and-greet with the band, and after the event attendees will be sent a limited edition 10″ coloured vinyl copy of the session.

The event is exclusive to Mastercard cardholders via their Priceless Cities platform. Spaces are limited, check http://jimmyeatworld.com/ for the ticket announcement.

Ticket pre-sales for the first round of Surviving, The Tour dates begin TODAY at 10:00 AM local time and will go on-sale to the general public on Friday, September 27 at 10 AM local.

Many, Many more dates to be announced