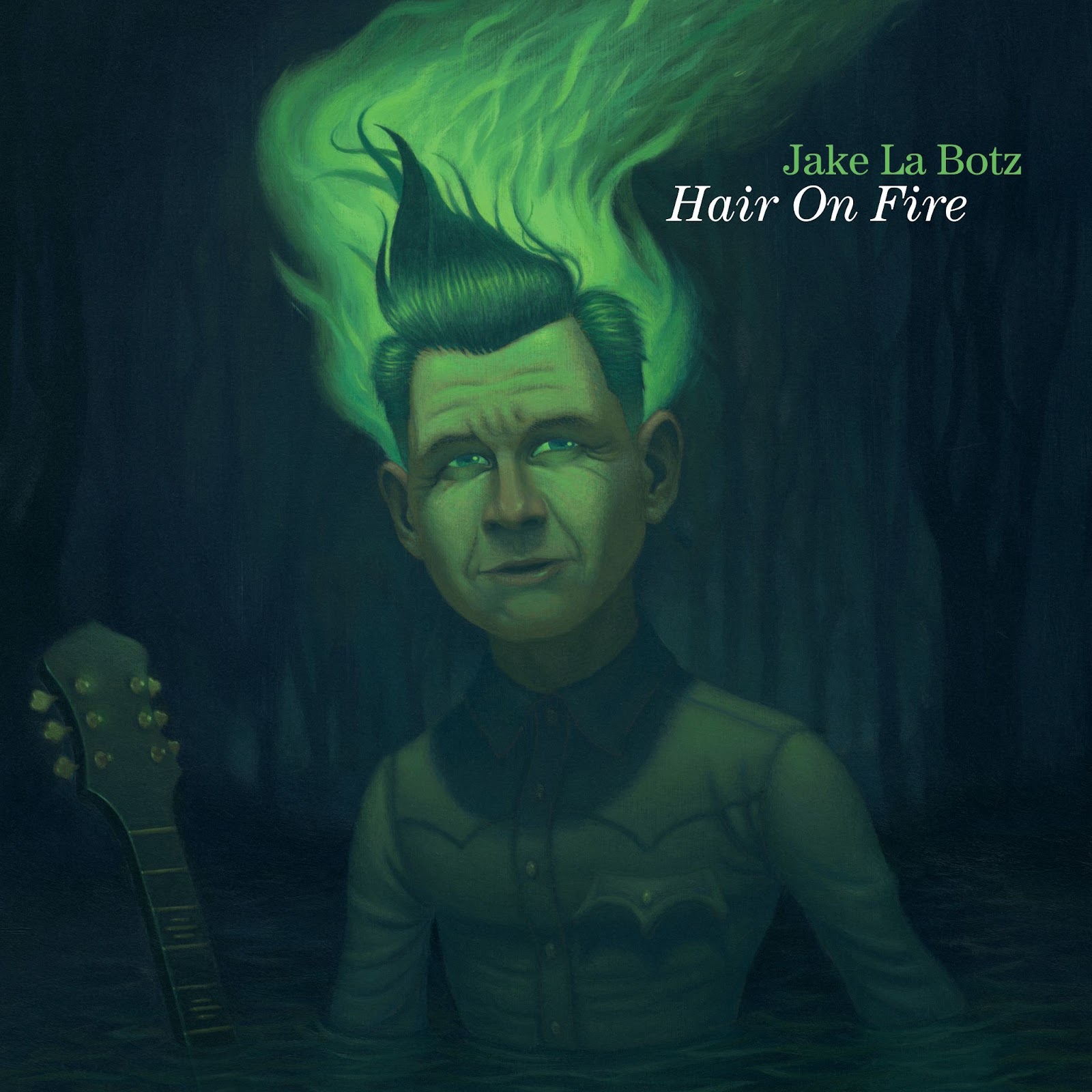 June 16, 2022: Today, Jake La Botz announces his new album Hair On Fire will be released on September 9, 2022. He’s also shared the title track and its music video, directed by Owl Martin Dwyer.
“There’s a saying in Buddhism,” La Botz, who is also a meditation teacher, explains, “that one should practice as if their hair is on fire, which means there should be an urgency towards using the tools of meditation to open up and see what is. The message is: life is short and, if you want to wake up and discover what it’s about, now is the time.”
Watch “Hair On Fire” Music Video HERE
Jake La Botz was teaching meditation in a northwest Georgia prison when something unexpected caught his ear. He wasn’t sure at first, but he could swear it sounded like a band was playing in the room next door. And not just any band, for that matter, but a genuine, bonafide, soul-shaking gospel band. “I remember getting really excited because I could feel both of my worlds coming together in that moment,” La Botz recalls. “The two sides of my life converged into this one, beautiful experience, and it just stopped me in my tracks.”
La Botz didn’t realize it at the time, but that marriage of music and meditation would go on to form the bedrock of his captivating new album, Hair On Fire. Recorded with an all-star band of players including engineer/drummer Alex Hall (JD McPherson, Neko Case), bassist Beau Sample (Pokey LaFarge, Cactus Blossoms), and NRBQ guitarist Scott Ligon, the collection balances the wisdom and patience of La Botz’s decades of Buddhist training with the grit and vigor of his Chicago upbringing to create a sound that’s at once unabashedly vintage and decidedly present.
Born and raised in Chicago, La Botz spent his early days learning from the last of the city’s pre-war era bluesmen, studying under the likes of David “Honeyboy” Edwards, “Homesick” James, and “Maxwell Street” Jimmy Davis. He began releasing his own albums in 2000 and would go on to spend the next two decades amassing a litany of critical acclaim in both the US and Europe as he worked his way up from playing street corners and tattoo parlors to sharing bills with luminaries like Ray Charles, Etta James, Dr. John, Mavis Staples, and Buddy Guy and Junior Wells.
It wasn’t just critics who took note of La Botz’s singular take on the American folk and blues tradition, though. Celebrated novelist Jerry Stahl hailed La Botz as “a creator of dark poetry and haunting song,” and actor/director Steve Buscemi recalled that “from the first time I heard him playing guitar and singing his songs in a smoky bar on La Brea and Sunset, I became a devoted fan.”
Buscemi became more than just a fan, writing roles for La Botz in films like Animal Factory, which featured two of his songs, and Lonesome Jim, which premiered at Sundance. In the years that followed his big screen debut, La Botz would continue to act when his touring schedule allowed, appearing in everything from True Detective to On The Road and even starring in the stage musical Ghost Brothers of Darkland County, written by Stephen King and John Mellencamp.
As his dual careers took off, La Botz, who’d overcome a difficult heroin addiction in his younger years, found his way into meditation as a means of opening up a new life for himself. “In the spiritual tradition I belong to, we practice what’s called Somatic Meditation,” La Botz explains. “It’s all about connecting with the inherent space, wisdom, and compassion found within your own body, which is actually very similar to the way that songwriting has worked for me over the years.”
Like other spiritually motivated songwriters before him, Johnny Cash, Leonard Cohen, Bob Dylan, and George Harrison to name a few, the two streams of songwriting and spirituality have very much come together for La Botz. Prior to Covid, he taught meditation in prisons, Buddhist centers, living rooms, and elsewhere, ever looking to meet people where they’re at and to share what meditation has to offer. For La Botz both meditation and music are very important points of connection with others, and sometimes his music fans even end up practicing meditation with him. During the pandemic he has continued to focus on his two primary loves the best way he can – teaching meditation over Zoom for people around the world, and writing and recording songs to share with others.
Over the years, Jake’s work has been praised by Rolling Stone, World Cafe, No Depression, Folk Alley, Atwood Magazine, American Songwriter, PopMatters, Glide, Bluegrass Situation, and many more.
La Botz recently signed with Mongrel Music for North American booking, and announced a handful of tour dates for this Summer. More shows to be announced soon. See full list of dates below, and ticket info HERE.
Hair On Fire tracklist:
1. Let It Fall
2. Killing for a Living
3. Hair on Fire
4. Hope the Sunshine
5. It Looked Just Like a Gun
6. Broken Birds
7. I Don’t Want It
8. Who Will You Love
9. First McDonnell’s on the Moon
10. Getting Ready to Roll
11. Mirror in Me
12. Last Mission on Earth
Tour Dates:
07/16: Minneapolis, MN @ Under The Canopy
08/04: Southbridge, MA @ Starlite
08/05: Norwood, MA @ Extended Play Sessions
08/06: Mason, NH @ Blues on the Range
08/07: New Haven, CT @ Cafe Nine
08/29: Saint Paul, MN @ Minnesota State Fair
08/30: Saint Paul, MN @ Minnesota State Fair
Follow Jake La Botz:
Website – Facebook – Twitter – Instagram