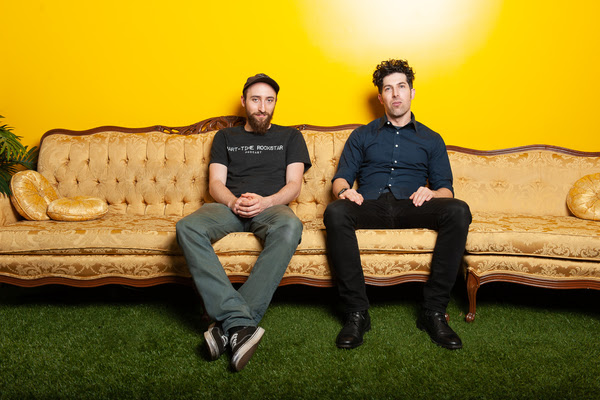 Photo credit: Morris Photography
LISTEN // WATCH: “NOTHING LASTS FOREVER”
Today, with the release of their single and accompanying music video “Nothing Lasts Forever,” Washington, DC-based duo The Slang announces the forthcoming release of their debut LP Divide, due out on September 24th. “Nothing Lasts Forever” is about reliance on an unhealthy vice—lyrically crafted such that the vice could be anything from a significant other to an addiction. “‘Nothing Lasts Forever’ is about addictions in our lives that we seem to never conquer,” says co-founder John Bobo.  “Addiction comes in all shapes and sizes so we wanted a video that interpreted it as an unhealthy relationship.  Maybe she breaks the addiction or will the cycle continue?”  The single, and its cinematic video directed by Adio Ash, is the first chapter of the album’s stories.
The album features 10 shimmering alt-rock gems written by co-founders John Bobo and Felix Nieto, and produced by Nieto. “It’s our first full-length album, so we used that to our advantage to take risks that we may not have on our prior EP’s,” explains Bobo. “As the expression goes, ‘Stories Don’t End,’ so what happens after the movie ends and the credits have rolled? Divide is an album about trying to overcome the inevitable, but continues asking that question of ‘what happens next?’”
~
Offering a distinct blend of power-pop, alternative, and contemporary rock, The Slang is comfortable testing genre lines and taking their time to capture the minutiae of modern life. With a laid-back intensity that infuses their music, lead vocalist/multi-instrumentalist John Bobo serves as the main songwriter while bassist/multi-instrumentalist Felix Nieto focuses on production. Both artists share a kind of low-key perfectionism: hands-on, hyper-attuned to textural detail, and aware of what elevates a song from good to great. “We want to do it right,” says Bobo. “And we’re willing to do whatever it takes to make the best possible track each time.”
With smooth vocals and striking guitar melodies, The Slang is often compared to bands like Snow Patrol and The Killers, but with a modern twist and more experimental production value. “We care about the experience, whether on headphones or at a live show,” says Nieto, whose production adds a sleekness and edge. Bobo’s introspective lyrics explore singular moments that define human relationships. This beautiful blend of respective talent is evident on Divide, which features the band’s characteristic melodic precision, bright, electric guitar-driven anthems, and top-quality production, but with a more pop-leaning sound. Be sure to follow The Slang via the links below for the latest news, updates, and tour information.
DIVIDE TRACKLIST
Nothing Lasts Forever
Disguise
Divide
Fiction
Break the Rules
Broken Promises
Speed of Sound
Throw It Away
Hard To Forget
To The End
CONNECT WITH THE SLANG:
WEBSITE || FACEBOOK || INSTAGRAM || YOUTUBE || SPOTIFY || TIKTOK
THE SLANG GANG