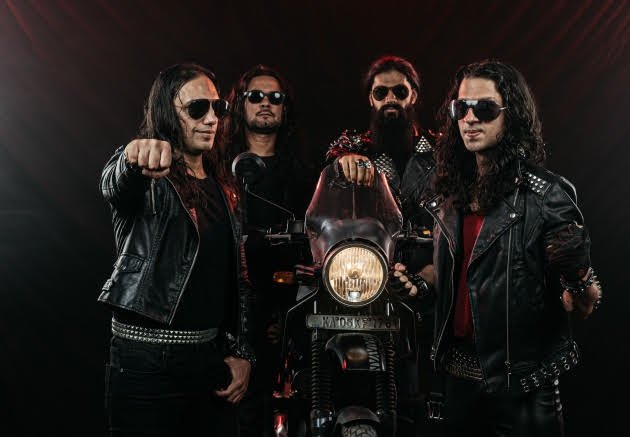 From Upcoming Album “Force Of Danger”!

Two years since their latest, vicious Afterburner– album, India’s heavy metal force Kryptos returns to invoke the ultimate sound of denim and leather with the release of their sixth studio album! Force Of Danger will be out on October 1, 2021 via metal powerhouse AFM Records.

The band, who formed in 1998 in Bangalore, have long been considered as one of the spearheads of the Indian heavy metal revolution. With five critically acclaimed albums under their belt, they have supported some of metal’s biggest names like Iron Maiden, Testament, Kreator, Exodus, Death Angel and many more, earning themselves a reputation as a fiery and exciting live act.

“It’s time to burn rubber! City lights and neon nights is the name of the game, so get into cruise control and blaze through the streets with “Hot Wired” – the third single off Force of Danger,” KRYPTOS frontman Nolan Lewis comments.
“Check out the scorching new Kryptos video for “Hot Wired” that brings back killer memories from when we were ripping it up on the road in Europe and burning through the countryside spreading righteous heavy metal in our wake. Nothing beats touring and partying with all you amazing headbangers, so this goes out to metalheads everywhere – keep the fire burning!”

Get into the tourbus with KRYPTOS and watch their new video for “Hot Wired” here:

Kryptos burst into the heavy metal scene with their debut album ‘Spiral Ascent’ in 2004. They were the first Indian heavy metal band ever touring Europe, followed by countless shows on tour with high class metal acts, two appearances at Wacken Open Air and many more prestigious festival stages. 2019 seen Kryptos not only headlining a European tour, but also the release of their fifth and most successful album to date, ‘Afterburner‘, which proudly followed in the best traditions of Judas Priest, Iron Maiden, Accept and Thin Lizzy.

This Fall, Kryptos are set to put the pedal to the absolute metal as they once again strike back with their blistering brand of ‘80s inspired heavy metal! Force of Danger will be out on October 1, 2021 with a heavy touring schedule to follow soon. The pre- sale of Kryptos thunderous new album, one that belongs into every well- sorted heavy metal record collection, is available at THIS LOCATION!