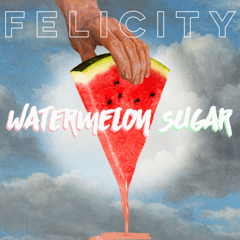 Do you know that super catchy song “Watermelon Sugar” by the one and only Harry Styles? Ever wondered what it would sound like if it were written as an alt-rock track? I think about this at least once a week.
Except now I don’t have to wonder anymore! Orlando’s own Felicity has taken the summery pop hit and reworked it into a super-charged alt-rock anthem – one that deserves to be blasted at full volume.
Check it out: https://youtu.be/BUDd5XqEzdU