HRH Prog (the UK’s leading celebration of Prog Rock) will be moving to a brand-new location for its eighth cycle. HRH Prog VIII will take place at the O2 Shepherds Bush Empire between Saturday 26th and Sunday 27th October 2019. ONWARD TO EMPIRE! 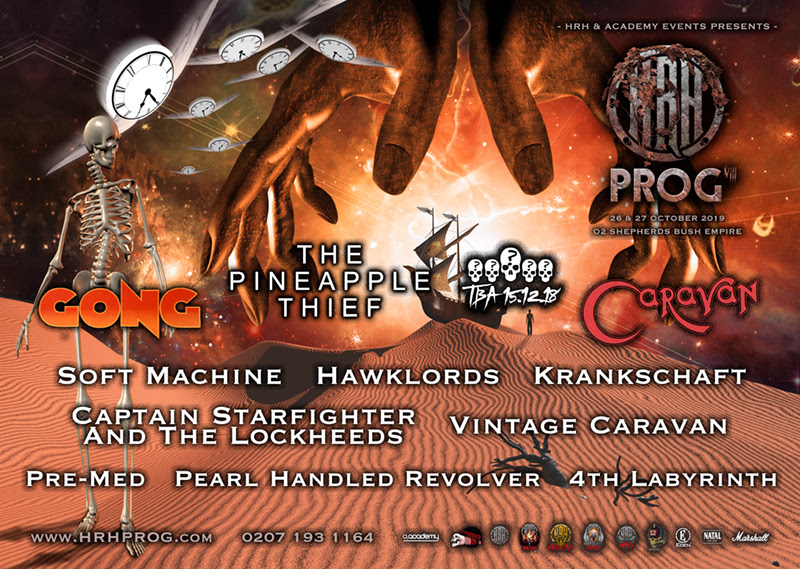 “HRH Prog has gone from strength to strength and already reached its seventh year,” says HRH’s CEO Jonni Davis, “Taking it into its eighth, we’re honoured to be moving the festival lock, stock and barrel to the iconic O2 Shepherds Bush Empire: a landmark site and legendary musical venue that’s showcased some of the best talent in the world.

We’re making the most of the move, fielding a super-strong line-up of prog. What’s more, we’ll also be bringing the top notch standards for residential festivals that we’ve honed for well over a decade to our latest location in London: The event itself will run over two days from 13.00 to 23.00. We will also have two quality HRH hotels featured on the doorstep of the SBE, within easy walking distance. Quality gaffes on the doorstep, great music, great community and a vibe to die for!“

The first wave of bands to be announced includes major players in the Prog Rock movement, who’ve been picked by the HRH community, as with all talent at HRH events.

The Pineapple Thief were formed by Bruce Soord in Somerset in 1999. With twelve studio albums to their name, including the critically-acclaimed ‘Tightly Unwound’ (2008), the band’s latest release ‘Dissolution’ (2018) shows that the band continue to expand their songwriting and technical horizons, recently nearly selling out SBE themselves.

Gong were formed in Paris back in 1967. The French-British outfit is famed for weaving jazz, space rock and experimental material into their mind-blowing musical repertoire.

British prog purveyors Canterbury scene progsters Caravan have been active since the late Sixties, and are known for blending psychedelic rock, jazz, and classical into their sound, along with quirky, quintessentially English lyrics. Veterans and favourites of HRH Prog, we’ll be delighted to see them play our new venue!