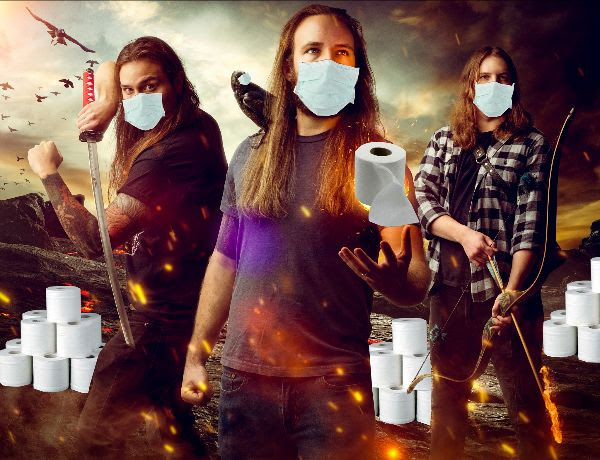 Like most of the US, the riff-metal psych-explorers in HOWLING GIANT are stranded at home for the foreseeable future in efforts to contain the COVID-19 spread, leaving them unemployed and forced to cancel their planned April European tour with Sergeant Thunderhoof and Horseburner.

Efforts to remain productive see them writing and hoping to return to the road later this year, but in the meantime, they’ll be live streaming a set of songs intended for the tour this Thursday, March 26th.

With an avalanche of artists across genres latching on to this easy way to share live performances without leaving home, HOWLING GIANT are distinguishing theirs with a social benefit component by raising money for the staff of local Nashville brewery Tennessee Brew Works.

“We will be live-streaming a set from our socially distanced home studio/bunker this Thursday, March 26th on the Tennessee Brew Works social media pages. There will be 2 tip jars available, 1 to help all of the bar staff from Tennessee Brew Works that has been temporarily laid off, and 1 for us and the music staff working to make this thing happen!”

And from the brewery:

“Like many restaurants, our service staff is hurting as they practice safe and necessary social distancing.  We’re also missing all the wonderful music on our stage here at TBW. That’s why we are bringing live performances for you to stream in the comfort of your own home!”

Two Venmo tip jars are tied to the event, one to benefit the TBW staff that has been laid off indefinitely at @tipjarstaff and another to help Howling Giant recover lost tour expenditures at @howlinggiant

Those interested in tipping/donating can do so via the Venmo app at either (or both) anytime before, during or after the event this Thursday.

HOWLING GIANT‘s 2019 album The Space Between Worlds was a milestone release for band and genre, uniting their blend of high-energy riffing, towering musicianship and golden-throated vocal harmonies.  The album landed at the top of numerous year-end lists including The Obelisk‘s Best of 2019 and the Doom Charts Best of 2019.

As the continuing virus epidemic makes live activities and touring in 2020 an uncertain proposition, HOWLING GIANT continues to push ahead with whatever options they can come up with, including an already-completed split release for the Ripple Music Turned to Stone series alongside Sergeant Thunderhoof as well as an appearance on Magnetic Eye Records’ Dirt [Redux] release this summer.

The Space Between Worlds is available on Spotify and at bluesfuneralrecordings.bandcamp.com/music.