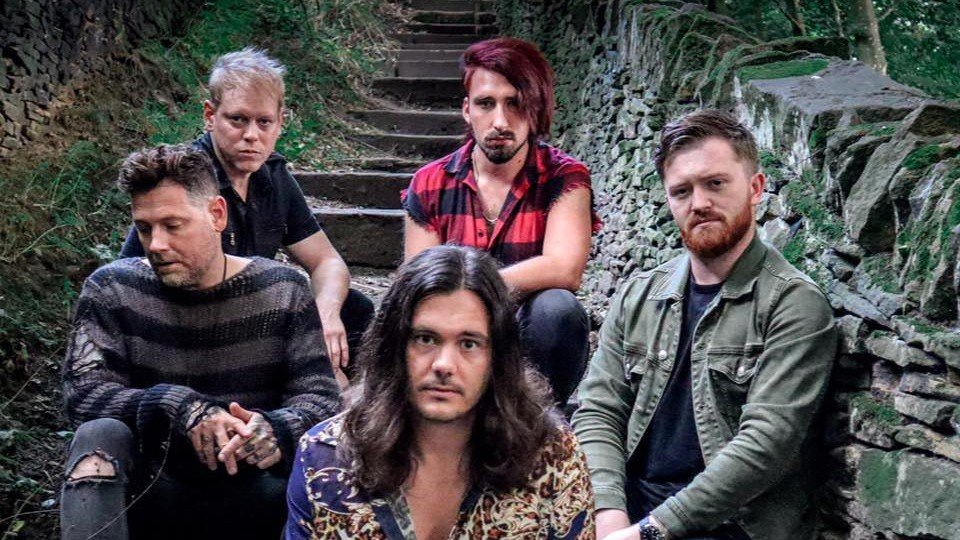 You guys are fresh on the scene, for anyone not in the know tell us how Dead Romantic came to be.

A video went up on Facebook of me singing some cover songs, some zeppelin or something I think, and somehow it ended up on Mike’s feed. I have no idea how because I don’t know how we could have any mutual friends at that point. But he commented asking who I was and we got in touch and planned to meet up and talk music and working together and stuff. Then COVID hit, and I was like, BASTARD! Haha. But we found some time between lockdowns and stuff and got together to start writing. We stumbled across a sound that really spoke to us and that was the point where we looked at each other and said let’s turn this into a band rather than just a project, so we went out looking for members and luckily we found Chris, Sam and Dave and now we’re complete and ready to take on the world!

Your first offering ‘Yesterday’ was a real statement of intent, did the interest around the track and the band surprise you?

It’s been really overwhelming and exciting, we love the song ourselves so we hoped that other people would too, we had faith in it; but the response has been insane! We sold out our first show this month and there were people screaming our lyrics back to us which is surreal. But we love that people are loving what we’re doing!

You may not have noticed but 2020 was a strange year for the industry, how were you guys directly impacted by this? was the band set up and ready to go prior to lockdown or was it born out of the pandemic?

We were born of lockdown I suppose, so it put us on hold for a little while like it did everyone else. And we’ve been going stir crazy wanting to get out there and play! But there have been some upsides. It kind of gave us the time to sit back and really analyse the songs we were writing and use all of our time to focus on the record. Especially because we recorded in Mikes studio, we had so much time to go back and re-write sections that we weren’t entirely satisfied with or parts we thought could be better, so I guess we can take that positive from all the time we spent indoors. But we certainly are ready to get out of the house now!

People love to put bands in boxes, if you were to put a label on what you do what would it say?

Not for human consumption? HA! No, I think people can label us whatever they would like to be honest, music is a very personal thing and everyone is entitled to their own opinion. We’ve been called metal, rock, alternative, emo, pop rock, modern rock, there’s been a few. But I’d probably put a couple of slashes in there, alternative/rock/metal or something?

You guys are in the lucky and unusual position of having a multi-platinum producer in Mike Krompass in the band, does this change the dynamic of the band at all?

Mike is great and he’s humble so I don’t think that there’s any real difference in dynamic between him and the rest of the band. We get on really well as a group and we work together really well. I’m not going to lie, it helps in the way of getting quality studio time and it’s much cheaper to make a record! haha. But he has experience that not all of us have and he pushes us to be the best we can be and to strive for a high level of musicianship, so it’s useful in that sense too. But on the whole we’re a pretty close group considering we’ve only been working together for roughly a year, and the dynamic really is great between all of us.

How do you feel about the upcoming gigs, is there any hesitancy from an artist’s viewpoint about getting out there again after the chaos of the last 18 months?

No hesitancy what so ever, we are so excited to get out there. We’ve been working hard in rehearsals and pushing ourselves to be the best we can be ready for people to come and see what we have to offer. The next two shows are Blackpool and London and then we’re looking to get out there and tour the world!

What is next of the cards for Dead Romantic?

We have a show booked on the 28th July at The Waterloo in Blackpool, and then a show the week after on the 4th August at The Black Heart in Camden. Both of those shows should be killer because like I said we’ve been really hammering the rehearsals to make the show as good as it can be for the fans. The album then is scheduled to come out on 3rd September, all being well. So the plan is to get on the road and bring this collection of songs to the masses!

Dead Romantic unleash their visceral, instantly grabbing post-apocalyptic cinematic new single and video in ‘Fight Me’. Front man Dan Taylor passionately states: “It’s about hitting the pinnacle of the anger that you feel when someone has pushed you and pushed you until you explode and you can no longer be held accountable for your actions. You did this, you fucked with me for too long and I’m done, let’s throw down!”

Having recently smashed a sold out show in Oldham – next in for it are Blackpool at The Waterloo Music Venue July 28 and a London debut at The Black Heart August 4. Both shows are on sale now with limited tickets left via www.deadromantic.com/tour “We so can not wait, it’s been so long and the shows will be one hell of a release for everyone, we’re coming for you!”

Expressing a sound that draws from the heaviest riffs to radio pop sensibilities, the band hit you with a sonic melting pot reminiscent of such acts as 30 Seconds to Mars, Bring Me The Horizon, Foo Fighters, Bad Flower and Architects.

The band remarks: “We’re making the record we’ve always wanted to create, completely unchained, raw, filled with the best elements of everything we love about music. We’ve all come from different musical backgrounds that seem to work together. There’s a little bit of pop, a little bit of metal and a lot of rock that we hope can connect with people around the globe.”

With more singles on the way, as well as the forthcoming album that is rammed with ear candy, Dead Romantic are poised to be one of the breakthrough bands of 2021.

Kissed With A Lie