Underground Black Metal band Grab was started in 2005 by Wrath (Dødsferd, Leeches and many more) alongside War (Drunk Earth) in Athens, Greece and released Behold Your Future the debut demo in 2006 followed by a further demo in 2007 title Grab. 2008 saw the release of a three-way split Strike/Disgust for Human Imbecility along with the debut full-length Plague…

This was the final activity for the band following the disappearance of War, until 2017 when Bacchus (Dødsferd, Lotus Circle) joined Wrath and Grab began to breathe again, releasing Praying at the Whorehouse Church. It was following this that N.D (Isolert, Leeches, Sørgelig) and Goatlord (Imperium Infernalis) joined the band to record this follow up album.

This 6-track album spans roughly 40 mins and cut to chase, for the entire time you are going to be drawn into the wonderous sound of Underground Black Metal that is done at the highest possible standard. The album opens with almost a Black Thrash feel and a horrifying laugh, with choppy guitars and crashing drums, there is an Old School feel around the sound. The riffs cast a terrifying spell over you as abrasive vocal grates gloriously and the drums continual crashing and rapid thumping feel like a pinball flying around your skull.

The result of these top-class musicians getting together is phenomenal and something that even by the end of the opening track, you will be on your knees begging for more.

As the album progresses, the riffs get more sinister and the spell you are under plunges you deeper into the questionable unknown. Guided only by the sound of Grab, you have no option but to delve into the places you have avoided and those aspects of your mind you did not know were present. When you are faced with despair and anguish, what do you do?

As you allow Grab to take over and you submit to them completely, you will experience what you never knew was possible. Transported on the dark soundwaves of The Inevitable Filth of Mankind you will learn something about yourself and that something will be different for everyone. For me it was how cathartic letting go and being totally absorbed by the music can be. Only top-class music can give you this sort of experience, and like a drug, you keep going back for more.

The Inevitable Filth Of Mankind is one of the finest releases that I have heard this year and shows how powerful and engrossing music can be. I urge anyone who is into Black Metal or intrigued by what it has to offer to give a blast, it will one of those albums that you remember the first time you heard it and will never stop listening to.

The Inevitable Filth Of Mankind is out now on Fucking Your Creation Records. 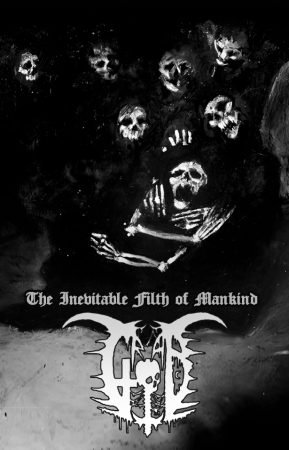