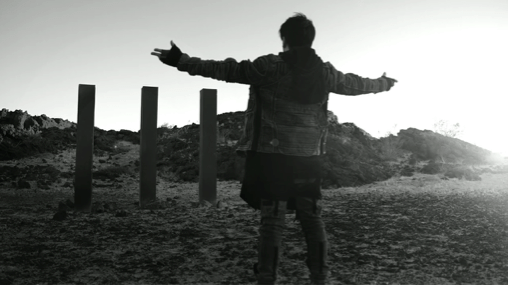 SHARES THE NEW VIDEO FOR ‘SAINTS AND LIARS’

FROM THE NEW ALBUM ‘INTRUDER’, WHICH FOLLOWS ON MAY 21ST

“‘Saints And Liars’ is a heavy, widescreen epic.”– Brooklyn Vegan

From the title track to the current single ‘Saints And Liars’, Gary Numan’s upcoming album ‘Intruder’ (out May 21st) is building intrigue and mystique in equal measure. Four decades into the synth-pop pioneers hugely influential career and audiences are still enraptured by his conceptual scope and foreboding sonic attack. It has resulted in a new wave of radio support from Steve Lamacq and Chris Hawkins at 6 Music, plus international coverage ranging from NME and The Quietus to Brooklyn Vegan and Rolling Stone.

Gary Numan now adds to that escalating interest by sharing the new video for ‘Saints And Liars’. When it comes to depicting a planet in its death thralls, location is everything – which makes the setting for the video so inspired. He visits the Amboy Crater, the remains of an extinct volcano located in the Mojave Desert in California, which is estimated to be 79,000 years old and last erupted 10,000 years ago. From the stunning, sweeping aerial shots to the stark, desolate beauty of the cinematography, the video creates a fascinating imagining of a world wounded beyond repair.

Gary commented, “Saints And Liars is the earth drawing attention to our blind faith in religion, in a fictitious God, who in reality does nothing for us, while at the same time abusing and destroying the planet, which does everything for us.”

The ‘Saints And Liars’ video was directed by Chris Corner, better known as IAMX and previously a member of Sneaker Pimps. Extra footage was shot at Sawtooth Studios in Pioneertown, California.

‘Intruder’ is available to pre-order here and will be released on CD, deluxe CD, black heavyweight double-vinyl, picture disc double-vinyl and digital formats. There are also three exclusive coloured double-vinyl formats: in red (at select indie stores), silver (from Amazon) and gold (from Gary Numan’s official store, which also exclusively stocks the cassette).

Since coming to prominence with era-defining hits such as ‘Cars’ and ‘Are ‘Friends’ Electric?’ (with Tubeway Army), Gary Numan has remained consistently creative and released a huge catalogue of work. His impact on electronic and alternative music has been hailed by pioneers such as Prince, David Bowie and Nine Inch Nails and remains impactful today, with Kanye West and Lady Gaga both crediting him as an influence. He was rewarded with the prestigious Inspiration Award at the Ivor Novellos in 2017 and shared his remarkable story with 2020’s candid autobiography ‘(R)evolution’.