Norwegian doom metal pioneers FUNERAL have teamed up with the Obelisk for the premiere of their new lyric video for the song “Materie”. The track is taken from their new record  ‘Praesentialis in Aeternum’, which will be released via Season of Mist on December 10, 2021.

FUNERAL comments: “The song ‘Materie’ was written in collaboration with my good friend Jarno Salomaa from the Finnish band Shape of Despair. We used to play in the band Clouds together some years ago. It was actually finished 6 years ago, and performed live once or twice back then untitled.

It is the shortest song from the album, but it has everything one would recognize from us, plus a hint of Jarno’s distinct sound and feel. I’m very proud of this collaboration. This song also introduces the very talented guitarist Magnus Tveiten with his first solo contribution for FUNERAL.

The song contains the usual epic orchestration that you will have also heard on ‘Ånd’ plus a couple of parts with only vocals and piano. So it is a diverse song, but also hints to what can be heard on the album. Sindre does a magnificent job with his signature harmonies and some growling. The lyrical content continues where ‘Ånd’ ended, and continues the conceptual journey into our personal take on the works of Immanuel Kant.”

Pre-orders for ‘Praesentialis in Aeternum’ are now live HERE. 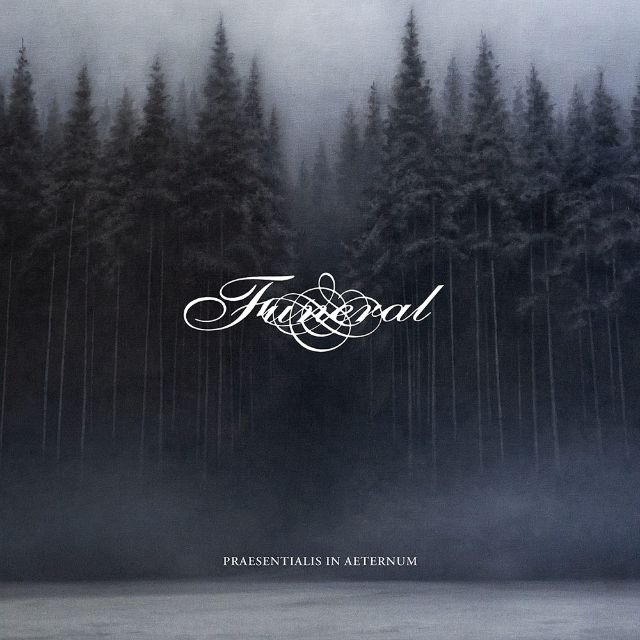 Melancholy. Pain. Loss. Solitude. Those had been just some of doom metal main themes ever since bleak pouring rain and the sound of church bell in the distance gave birth to the genre on BLACK SABBATH self-eponymous debut over five decades ago. But how many musicians have actually been bearing in their very flesh those gut-wrenching feelings?

Anders Eek – FUNERAL’s founding member, drummer and undisputable leader since 1991 – doesn’t particularly see it as a badge of honour, but he’d be the first to admit that somehow, the “death and loss we had to go through over the years were extremely painful yet inspiring, as a musician and as a human being.” And indeed, ever since their very first rehearsal in a basement in their hometown of Drammen, just outside of Oslo, FUNERAL had been ridden with problems and tragedy. Originally inspired by CATHEDRAL and CANDLEMASS, they very quickly set out to create the most depressing and slowest form of doom/death possible at a time when their home country was being hailed as the birthplace of black metal. They went through several labels over the years, only to see them bust soon afterwards. Plagued by recurrent line-up problems, they even lost two of their key members Einar André Fredriksen (bass) and Christian Loos (guitar) in 2003 and 2006, respectively, to suicide and overdose.

But somehow, Eek never surrendered, but instead overcame all those obstacles by releasing over the years a slab of classics, each with its own, distinct personality, from the utter misery of the delicate yet none-so-extreme 1995 debut album ‘Tragedies’ to the more melodic and accessible 2001 gothic/doom masterpiece ‘In Fields Of Pestilent Grief’ or 2012 symphonic masterpiece ‘Oratorium’. Still, after the band most recent performance in Antwerpen on February 3, 2018, “life got in the way” as Anders puts it. “Some of us had kids, others moved out. Even I had quite a lot of things going on in my personal life and, at least for a while, maybe less drive to keep on carrying on the weight of the band on my shoulders. I never stopped writing music though because it’s something I’ve always done anyway. But there were less things happening you know. During that nine-year gap, I could have written ten albums but I only wrote two ah!”

The beast did sleep less than two years though as the following year singer Sindre Nedland, who had joined FUNERAL for ‘Oratorium’, “woke up from his slumber and told me he was ready to focus music again. I had the whole music demoed and ready, so it quickly snowballed from there.” For the first time ever, not only are the lyrics fully in Norwegian but they were also written by an outside collaborator, a “personal friend” of Anders who happens to be a psychologist. “He’s both a close friend and a fan of the band. So, he knows exactly how I roll and what the band is all about. I knew he was writing on the side so one day about five years ago, I asked him as a joke almost ‘hey, why don’t you write lyrics for my band instead?’ and within five months, he did! His lyrics are more or less his take on philosopher Emmanuel Kant’s work. Initially, I thought about maybe translating them to English, but it would have meant redoing them so in the end, we choose to keep them as they were. The booklet will include a little text explaining what they’re all about for those who don’t speak Norwegian.”

Musically, Anders describes ‘Praesentialis in Aeternum’ (something along the line of “here eternally”) as a “natural progression. I know we have some fans who are only into the first albums and those who discovered us in the early 00’s but this new opus has a little bit of everything for everybody. The symphonic elements are far more bombastic yet much well more done, thanks to the evolution of technology since ‘Oratorium’. It’s in a way a mixture of our three last albums yet our most diverse work yet, with both quite concise and very epic pieces. As a matter of fact, we recorded something like ten songs but vowed to choose only the six best to get the best album possible.” Among them you’ll find one originally written during their third album |From These Sounds’ session, one co-written with former founding member Thomas Angell (who left in 2000) and, in the deluxe version, a CANDLEMASS (‘Samarithan’) cover version originally recorded back in 2005 with their then singer Frode Forsmo, thus linking ‘Praesentialis in Aeternum’ with the band’s past history. Also guesting on ‘Ånd,’ the first single off the record, is Lars Nedland, Sindre’s own brother of BORKNAGAR and SOLEFALD fame. It’s also the first album for their new partner, Season of Mist.

Since the album was completed, the now septet has welcomed for the first time ever a full-time violin player “to perform live most of the strings you can hear on our albums as soon as we’ll be able to go back on stage.” In the meantime, Anders confesses the next album is more or less “finished. ‘Praesentialis’ could have been released earlier if we hadn’t to face all those COVID-related problems. We couldn’t meet in person, let alone rehearse or even just take promo pictures… But now we have a new label, a new line-up and a totally renewed sense of energy so why stop there? FUNERAL started thirty years ago be truth be told, it’s never been stronger. So, doom on!”