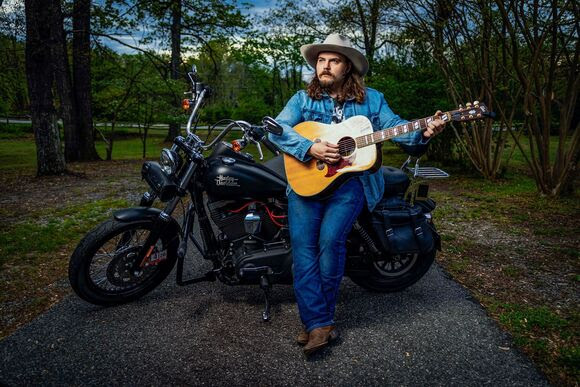 More than a decade before Steven Bruce recorded Same Time, Same Place, Same Station — a classic country-rock record for modern times, rooted in outlaw spirit, autobiographical songwriting, and raw resilience — the Virginia native strummed some of his first songs in his grandparents’ living room, performing Merle Haggard covers and other country classics for two of the most influential figures in his life.

“That’s where my passion for music began,” remembers Bruce, who served as a caretaker for his grandparents while still in high school. “Between taking them to doctor’s appointments and grocery stores, I’d sit with them in the living room, playing the songs they wanted to hear. Every time we finished and I went to leave, Nana would give me a kiss and a hug and say, ‘We’ll be seeing you again; same time, same place, same station.'”

“They both had asked me, years prior to their deaths, to sing at their funerals,” he adds. “I did for them both.”

Born in Fredericksburg, Virginia, and raised in the surrounding counties, Bruce grew up fast, landing his first barroom gigs as an 18 year-old performer and marrying at 22. A founding member of the country band Whiskey Revival, he wasted little time building his audience and his acclaim, with the group being dubbed the “Best of the Burg” by a local publication. His music career was beginning to take shape, but his marriage was crumbling. By his mid-20s, Bruce was divorced. Less than two years later, his grandparents passed away. To cope, Bruce turned to his favorite music — the cosmic country of Gram Parsons, the burly twang of Waylon Jennings, the heartland rock of Tom Petty, the modern-day southern swagger of Margo Price — and picked up his guitar, writing a batch of songs that saluted his honky-tonk heroes while establishing a unique, countrified sound of Bruce’s own.

There’s plenty of heartbreak and loss on Same Time, Same Place, Same Station. Autobiographical songs like “Shirley Bird” and the sweepingly nostalgic “Keeping Time (Until Then)” pay tribute to Bruce’s grandparents, while “Cryin’ Eyes” — with its mix of pedal steel guitar, loping grooves, and vocal harmonies — turns a tear-stained eye to his divorce. In the spirit of his late relatives, though, the album is also a celebration of life, focusing not only upon its struggles and setbacks, but also its small victories. “Weekend Song” is a roadhouse roots-rocker with plenty of Chuck Berry-inspired guitar riffs, and the spirited “Detours” is a kiss-off to anyone standing in Bruce’s way. On album highlights like “Rhinestoned” — an original song worthy of Gram Parsons’ old-school duets with Emmylou Harris — Bruce even finds a balance between melancholy and resilience, occupying the same fertile middle ground as many of his country favorites.

“Everyone grieves differently,” the songwriter admits. “I want this record to serve as a tribute to my grandparents, and a tribute to myself for making it through what I thought were the worst times of my life.”

Helping him through those tough times were a number of collaborators from across Virginia, including producer E.P. Jackson, harmony vocalists Mackenzie Roark and Karen Jonas, pedal steel guitarist Gary Lee Gimble, and drummers Derrick Decker and Seth Brown. Together, the group recorded Same Time, Same Place, Same Station at Fill Your Boots Studio in Fredericksburg, filling the album with Telecaster twang, swaggering vocals, and even a reimagined cover of Jack White’s “There’s No Home for You Here.”

Same Time, Same Place, Same Station takes its audience on a rollercoaster ride of human experience, its 12 songs anchored by sharply-written stories about emotional lows, chemical highs, busy workweeks, wild weekends, old flames, new relationships, lovers who leave, and the family members whose influence will forever live on. There’s heartbreak here, but there’s hope, too, with Steven Bruce shining a light on his own experience.

“I hope folks listen through this album and it makes them feel like they can make it through whatever may lay ahead of them,” he says. “From my divorce to losing both of my grandparents, life throws you curveballs sometimes. The best you can hope for is to lock in and slam it out of the park.”

To set up an interview with Steven Bruce, or get your hands on hi-res photos or any other assets, contact Sweetheart PR Publicist Frank Keith.