announced for BRITs Week presented by Mastercard for War Child

Performing at The Dome on Friday 4th February

Pre-sale for Mastercard cardholders on sale 10am Thursday 13th January 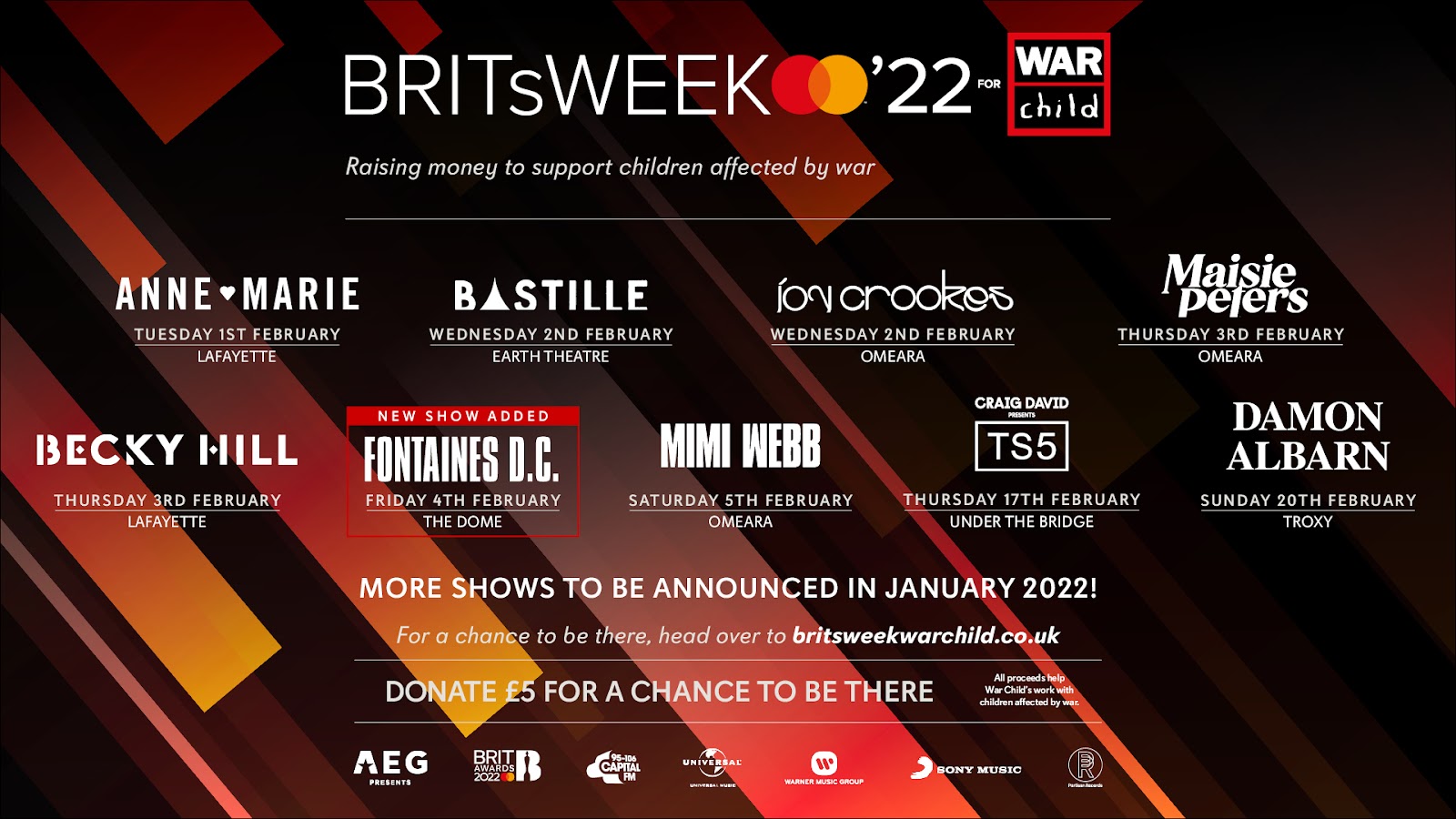 Today, Fontaines D.C. are announced to be joining the BRITs Week presented by Mastercard for War Child 2022 lineup, performing what is sure to be a phenomenal set at The Dome on Friday 4th February. The acclaimed Irish post-punk band will perform songs from their Mercury Prize shortlisted debut album and Grammy Award nominated follow-up. Fontaines D.C. join the stellar lineup that includes Anne-Marie, Bastille, Becky Hill, Craig David, Damon Albarn, Joy Crookes, Maisie Peters and Mimi Webb who were announced last month.

Returning in 2022 with another incredible series of gigs, BRITs Week presented by Mastercard for War Child gives fans the opportunity to see some of the biggest and most exciting names in music in intimate venues across London – all whilst raising money for children whose lives have been torn apart by war.

These one-off gigs will take place between 1st and 20th February around The BRIT Awards 2022 with Mastercard, to celebrate another remarkable year in British music.

Mastercard cardholders have exclusive pre-sale access to tickets to see Fontaines D.C. from 10am GMT on Thursday 13th January.

Tickets will go on general sale from 10am GMT on Friday 14th January.

The prize draw to win tickets for all BRITs Week presented by Mastercard for War Child events is currently open and will close at 11:59pm GMT on Sunday 23rd January. To enter the prize draw and win tickets to see the artist of their choice, music fans can make a £5 donation to War Child at www.britsweekwarchild.co.uk. To maximise the chance of winning, fans can enter as many times as they like.

Multi-platinum selling star Anne-Marie will kick off BRITs Week 2022 at Lafayette on 1st February, before chart-topping pop-rockers Bastille and South London’s acclaimed singer-songwriter Joy Crookes perform a day later on the 2nd February at EartH and Omeara respectively. Taking to the same Omeara stage the following day, the 3rd February, is Ed Sheeran-signed pop singer-songwriter Maisie Peters, while north of the river the chart-topping dance sensation Becky Hill will storm the stage at Lafayette. The latest addition to the lineup, acclaimed Dublin post-punk band Fontaines D.C. take on The Dome on the 4th February before viral rising star Mimi Webb plays Omeara a day later on the 5th February. They’re joined on the line up so far by the iconic singer, songwriter, DJ and producer Craig David whose anthem-packed TS5 show will take place at Under The Bridge on the 17th February. Closing BRITs Week on the 20th February at the Troxy comes a solo performance from musician and songwriter Damon Albarn, founder member of Blur, Gorillaz and The Good, The Bad & The Queen, who will perform tracks from his new album The Nearer The Mountain, More Pure The Stream Flows, as well as selected favourites from across his songbook.

BRITs Week is produced by AEG Presents, UK record labels association the BPI, and War Child, the charity for children affected by conflict. The event series is sponsored for the first time by Mastercard, headline sponsor of The BRIT Awards.

Proceeds from the shows will help to support War Child’s work that aims to reach children as early as possible when conflict breaks out and stay to support them through their recovery – keeping them safe, helping them learn and cope with their experiences, and equipping them with skills for the future.