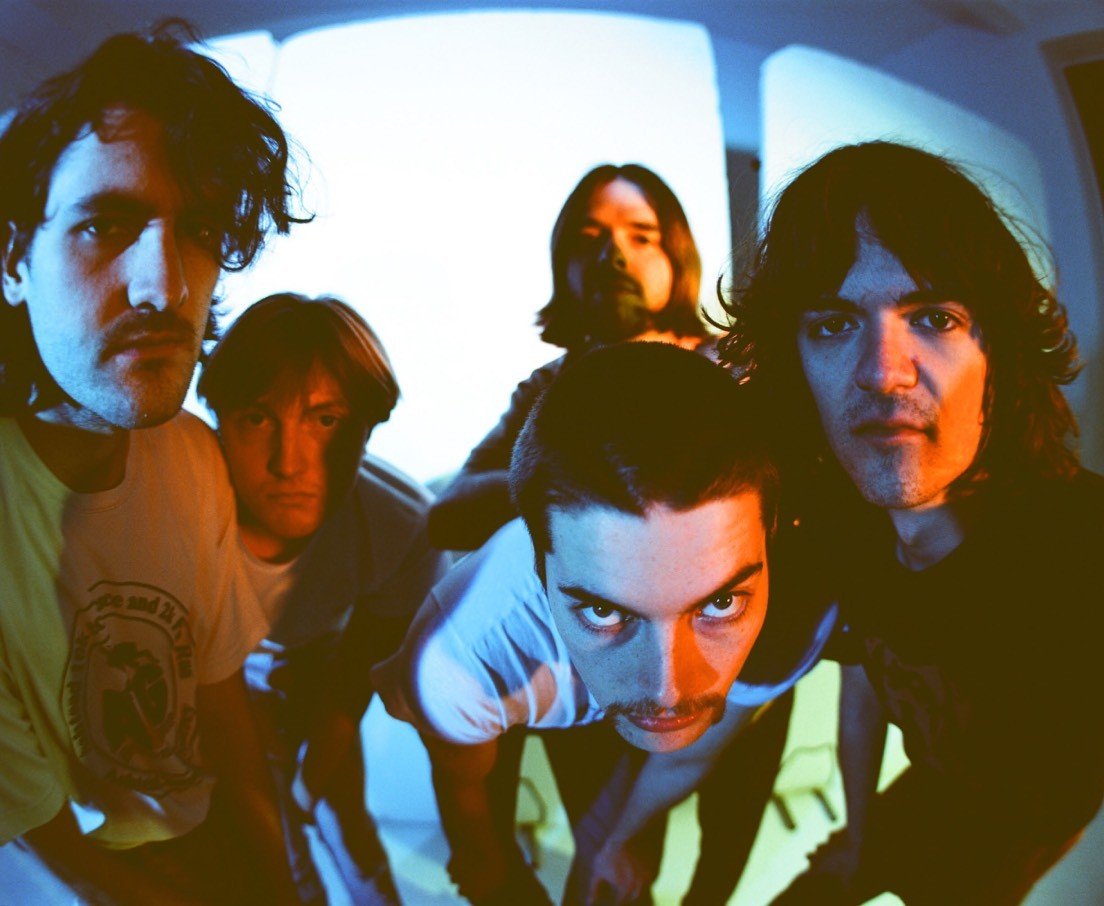 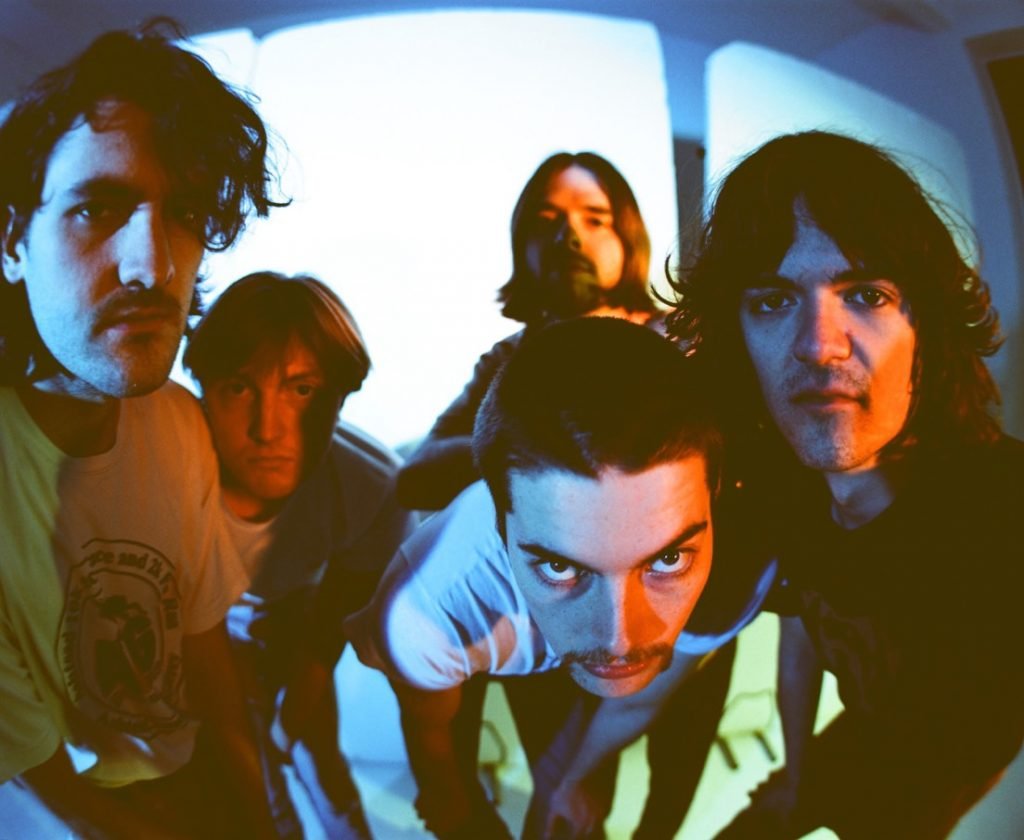 [Photo Credit: Percy Walker-Smith
FEET return with a brand-new EP ‘Walking Machine, due for release on August 6 via their new label home Nice Swan Records. It’s the first, eagerly anticipated new music from the indie quintet, since the independent release of their debut album back in 2019. The first single from the EP, ‘Peace & Quiet’ is available to stream now and accompanied by the following video. In keeping with the recent ‘Shop Local’ ethos, the band’s video was ‘Shot Local’ at a handful of their favourite local stores, including North London’s famous Audio Gold and local chippy, The Fish Palace in Muswell Hill.
Having moved into their North London flat together back in September 2019, FEET are now living “like a hive mind” and have level-upped their kinship – both as people and artists – several times over. Spending endless days making music, the band’s journey since their debut has been a rollercoaster – one with a definite U-turn. An initial batch of songs ended up being entirely scrapped after a sobering practice room realisation that, far from sounding like a cohesive second record, “one song sounded like a covers pub band, and another sounded like Eminem could throw some bars over it,” notes Callum.
And so, they sat down to write a manifesto: one that would tame their overflowing pot of ideas and put some necessary parameters around what they were doing. “No wanky guitar solos, no sailor outfits, no bringing a broom onstage,” jokes George. All fair points. But as well as that, the band started digging into what they actually wanted to sound like, setting up their home studio and taking a bigger interest in production and the atmosphere of the tracks, trying to hit the cross-section of pop music and something a little darker that they’ve always loitered around.
Comeback single ‘Peace & Quiet’ – a boisterous barrage of ramshackle guitars and sly lyrical digs that maintains the playfulness but streamlines it into something more direct, targeted – plants a flag in the ground for FEET mk. II. “It’s about demanding more from the current music scene” say the band. “2021 is the year for new and exciting groups supported by a rejuvenated industry. Now’s the time to start small, grass root scenes and DIY shows at your local village halls. What comes after this Peace and Quiet? That’s what excites me the most”.
“We’re not a post punk band, we don’t sound like a ‘London band’ whatever that is, but the indie reference in our shared hive mind is related to a major label, squeaky clean sound which isn’t what we want from our band,” explains George. “You either go the mainstream route or the sleazy South London route and we’re slap bang in the middle, so we’re trying to state our spot. We’re pretty comfortable where we are and this is the direction we wanna take it in”.
The forthcoming ‘Walking Machine EP’ takes these ideas and moulds them into four tracks that show a band still more than willing to throw in a liberal smattering of humour at the right moment, but who aren’t relying just on japes to get them through. They’ve still got a classically FEET name for their new direction, Crease Pop, but even that’s got some logic to it. “It’s taking the pop music formula – hooky choruses, nothing too self-indulgent – but it’s still got a bit of edge,” says George. “With Indie music, there’s an element where it can get quite soft and it’s quite easy to go through that phase where you think you sound like The Beach Boys, but we’ve come off the end of that where we want to be a bit grittier.”
Having beamed fans into their living room over lockdown with a series of livestreams imbued with more genuine live show energy than most, the tight-knit camaraderie the band have honed over the past year is there for all to see. Far from the group of novices they first emerged as, FEET are now a proper unit.
Alongside the new EP news, FEET will continue their new chapter on the road this August. The seven UK dates will see them perform the brand new material for the first time, alongside a host of fan favourites from their debut album. Tickets are on sale now and full details are below. 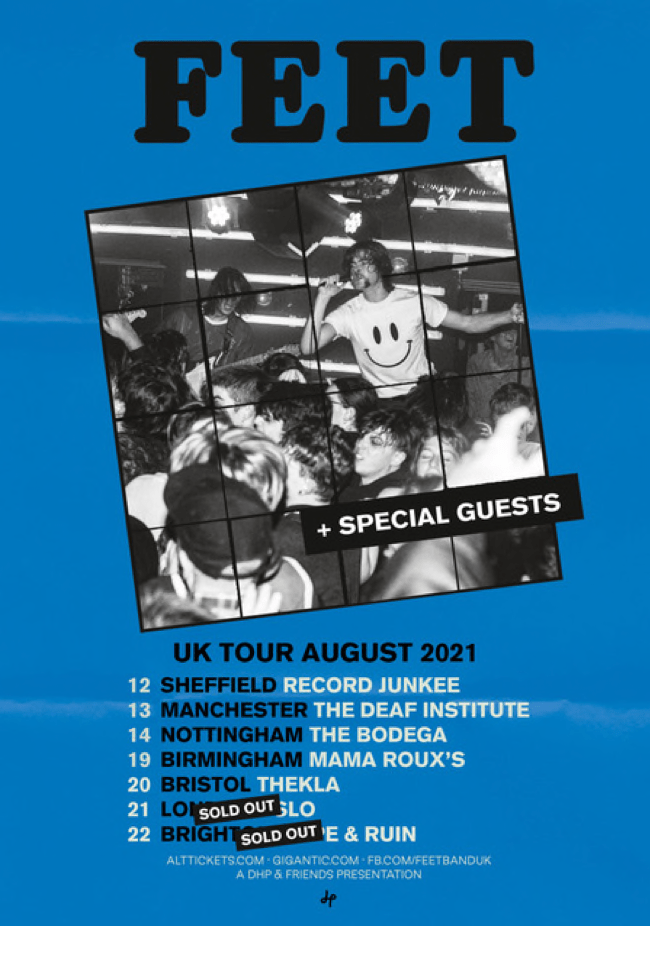 FEET
Walking Machine EP
Digital Release On August 6
Vinyl On September 13
Pre-Order Vinyl Here
Via Nice Swan Records
–
Praise For Feet
“Brilliant”
SUNDAY TIMES CULTURE
“Quirky, joy-inspiring garage-rock with a psychedelic twist”
THE INDEPENDENT
“FEET have made one of the most intriguing British indie albums of the year.”
★★★★☆ NME
“Wild, unhinged, and so much fun.”★★★★★★★★★☆
THE LINE OF BEST FIT
More About FEET
FEET (aka George, Ben, Harry, Oli & Callum) formed in Coventry back in 2017. Following a raucous live session for Felix White’s Yala! Records, the band’s profile grew rapidly, fast becoming one of the most exciting live bands around.
FEET independently released their debut album ‘What’s Inside Is More Than Just Ham’ to critical acclaim in 2019. Released via the band’s own label ‘Clapped Records’, the album was produced by Cam Blackwood (Jamie T, London Grammar, Billie Marten etc) and mixed by Alan Moulder (Foals, Interpol, Beach House).
The album and subsequent singles received heavy support from Radio 1, 6 Music, Radio X, NME, DIY, The Line Of Best Fit, Dork Magazine, Clash, The Independent, Sunday Times Culture and many more.
Connect With Feet
Facebook | Twitter | Instagram