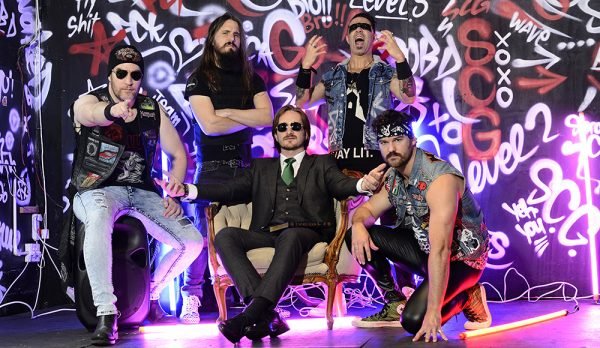 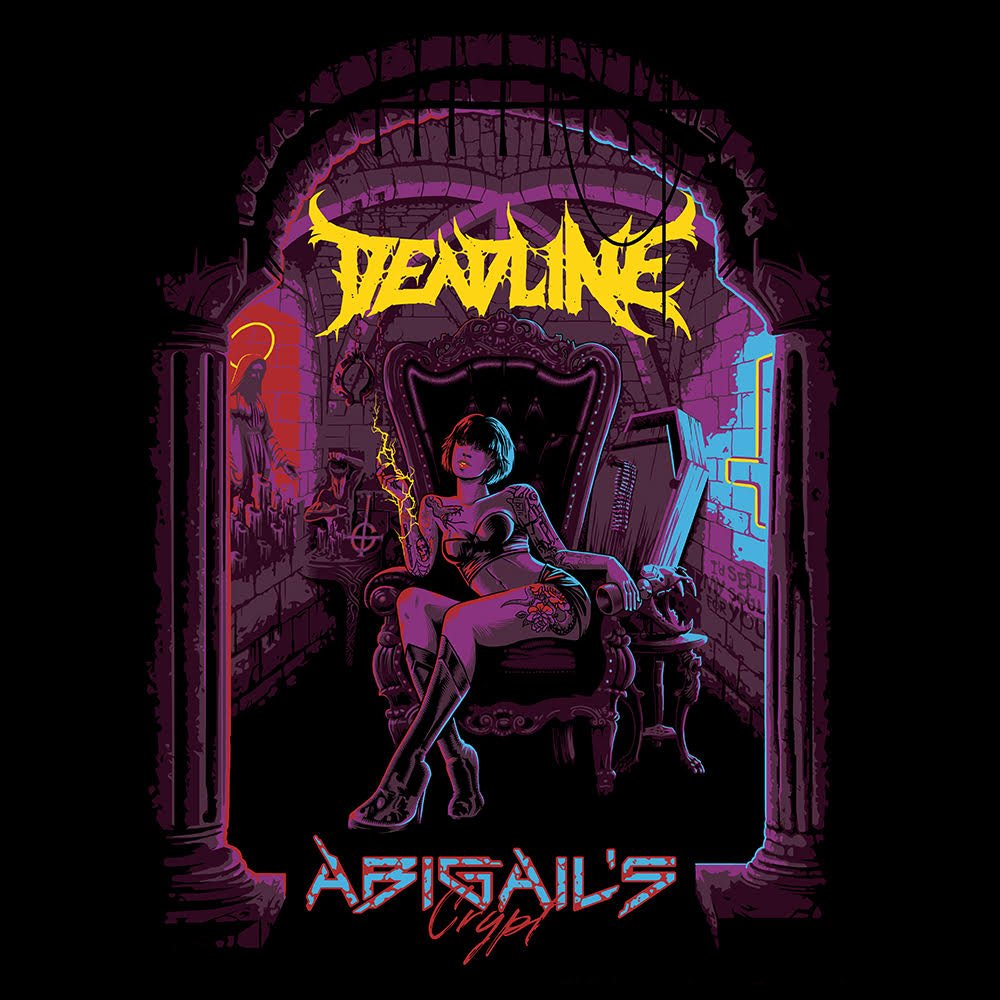 The new EP of B-sides and rarities is out now from New Wave of Old School Heavy Metal Giants DEADLINE is a tribute to the bands and songs that keep them and their live shows going (whilst you wait for part 3 of the DEADLINE Lady Blitzkrieg Black Wolf City Saga)!

ABIGAIL’S CRYPT is only available online and consists of 3 covers and 2 classic DEADLINE tunes from previous releases (all spiced up with an acoustic and even a Darkwave/Synthwave/Retrowave treatment)!

This EP is not only a tribute, but a call to arms, as DEADLINE is not prepared to be boxed in by genres! They also recently lost two stalwarts (Raven Chaos and Baz Steel), so this EP will usher in DEADLINE Mk4 with Damian Dread added to the new lineup.

The main reason we decided to put out this EP was due to the fact that we waited too long between our debut album “Black Wolf City” and sophomore album “Cathedral Point”. We aimed to release “Cathedral Point” sooner, but life does not always pan out the way we want it to. Add to that the fact that so many of our fans have asked for recorded versions of some of the covers we play, we decided to release this stopgap EP of B-sides and rarities. It really just is another excuse to get content to our fans whilst the wait for part 3 in the DEADLINE Lady Blitzkrieg Black Wolf City Saga!For all of those people who felt the magic of a DEADLINE show, you will know that we always throw in a cover or two to get the crowd going, so I suppose it was high time that we paid tribute to the bands and songs that keep us and our live shows going. The EP in total consists of 5 songs, 3 covers and 2 of our own tunes, which are off previous releases we decided to spice up. The covers are ‘Holy Diver’ by Dio, a staple from our live set since our very first show on 7 March 2015. We hardly play a set without including this gargantuan metal anthem. We also covered Billy Idol’s ‘Rebel Yell’, yet another staple from our set as well as Ghost’s ‘Square Hammer’. We’ve given the Billy Idol and Ghost tunes the real DEADLINE touch, so expect fast and energetic renditions of both!

For long we’ve wanted to do an acoustic track, but never knew whether we should write one from scratch or simply transpose an older one and so we decided to do an acoustic stripped down version of ‘Break The Silence’, a song that’s off our debut album that we wrote against child abuse. I really think the acoustic version does this song justice and believe that our fans will love this. We also decided to do a Darkwave/Synthwave/Retrowave version of ‘High-Tops & Bullet Belts’, a song off our second album. That is by far the bravest of the lot, but we consider ourselves dynamic enough to keep pushing the envelope.

This EP is therefore not only a tribute to our hero’s and to the songs that made us, but it’s a call to arms too. Even though we are a metal band, we are not prepared to be boxed in by genres or boundaries and are happy to rework our songs into our genres cause why the hell not. The album title follows the story, to those of you that night “Cathedral Point”, you would have read on the inside sleeve the story about Abigail Calaway, who was murdered inside the Cathedral, and we continue with the theme as we visit “Abigail’s Crypt” for all these hidden B-sides and rarities.

We also recently lost two band stalwarts in Raven Chaos and Baz Steel. The Casual Doctor (Damian Buys Dread) has been added to our line up, so I guess the last reason for this EP is to usher in the new line-up, DEADLINE Mk4. This EP will only be available for online consumption and we will not be printing physical copies. The fans are in for quite surprise!

DEADLINE are on the forefront of the New Wave of South African Heavy Metal (NWOSAHM) and mix elements of traditional heavy metal, thrash metal, power metal and hard rock in their music. DEADLINE are known for their passionate, energetic stage shows and have a loyal fan base all over South Africa known as the DEADLINE Heavy Metal Crew (DLHMC).

The DEADLINE debut album, “Black Wolf City” was released worldwide on 14 October 2017. Their subsequent single “Before I Die” was released on 19 June 2020, followed by the release of their sophomore album “Cathedral Point” on 26 June 2020.

We are metal! We are fire! We are legacy! We are energy! We are power! We are Deadline!