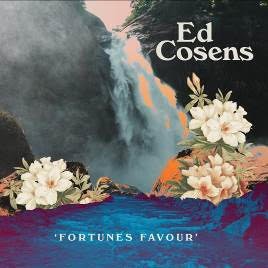 “an intimate, soul-baring record that wears its influences — along with its heart — on its sleeve”-  The Independent

In the run up to Fortunes Favour, Ed has released five stunning videos, including ‘On The Run’, ‘Lovers Blues’, ‘Madeleine’, ‘The River’, and ‘If’, the latter three of which make up ¾ of a short film set to conclude with the final single, yet to be unveiled. Ed has also been releasing episodes of his interview series ‘Talking Ed’, which sees Ed talk to local hero James O’Hara about growing up in the Sheffield music scene, hilarious anecdotes, and the unheard inspirations behind his solo album and some of the greatest Reverend & The Makers tracks. The episodes are available to stream now via Ed’s YouTube channel. Another collaboration worthy of a mention is the Fortunes Favour custom labelled series of Thornebridge Jaipur beer, made in honour of the album release. This isn’t the first time Ed has worked with the Sheffield brewers, however the beers did sell out rather quickly due to phenomenal demand.

It’s certainly a celebration to be performing alongside musicians in-person and inside a venue, and whilst the absence of live music in the last 12 months has been heartbreaking for all, for Ed personally it represents the longest period of time since he was 14 years old that he hasn’t regularly performed gigs, “To be back playing live, with other musicians no less, is incredibly exciting and when we all first got in a room together to play through the songs, it was no less electric and joyous.”

The stream will see Ed perform stripped back versions of the solo material, which he assures fans will be something wholly unique that may not have happened under normal circumstances, “Taking the key elements of the songs, the melodies, the strings, and reworking them into a semi acoustic form has been very rewarding. I’m very much hopeful to bring a full band show on the road as soon as is possible but again, for now I hope you all enjoy hearing the songs played live for the first time in this way.”

Working alongside Music Venue Trust to drive funds to the grassroots venue sector in the UK was a no brainer for Ed, who holds the scene as a major influence on his success today, “As soon as we first thought about doing this livestream gig, I knew I wanted to support the Music Venues Trust in some way. Without independent venues and the grassroots gig circuit, I simply wouldn’t be doing what I am today and have had the relative success I have, and many a band would not have been given the time and space to develop a fanbase playing those early gigs.”

A long-time lynchpin of the Sheffield music scene, best known as the guitarist and co-songwriter in Reverend & The Makers, Ed waited to make his solo debut until the time felt right. Only when his storytelling songs naturally found their own sound did he finally step from the shadows. “It’s only taken 10 years or so for me to find the confidence!” says the self-depreciating singer, who shared stages with Arctic Monkeys members Matt Helders and Alex Turner before the Makers took off.

‘If’, ‘The River’, ’Madeleine’, and now ‘Lovers Blues’ are tantalising glimpses of the established guitarist and first-time frontman’s majestic debut. Fortunes Favour casts a spell from the moment it opens; ten, timeless, strings-soaked songs are invitations to eavesdrop on life’s crossroads moments and the powerful emotions they evoke. Intimacy anchors expansive songs. Details are seductively spilled.

Fortunes Favour took flight after Ed abandoned attempts to decide on a sound and instead let the songs lead the way. “After several attempts, it became the song that sent me in the right direction. With a lot of albums, it takes just one song to kick things off and If was that moment for me. It set out the stall for who I wanted to be as an artist with its strong sense of emotion and the journey that runs through it.”

Recorded at Giant Wafer Studios in Wales and produced by Ed and Dave Sanderson – aided in the recording room by Milburn’s Joe Carnall and The Crookes’ Adam Crofts – Fortunes Favour is a rare debut album made mid-career. It’s a record which deals in real life, rather than dreams, on which Ed pours 20 years of songwriting experience into looking back, dwelling on the moments that mattered.