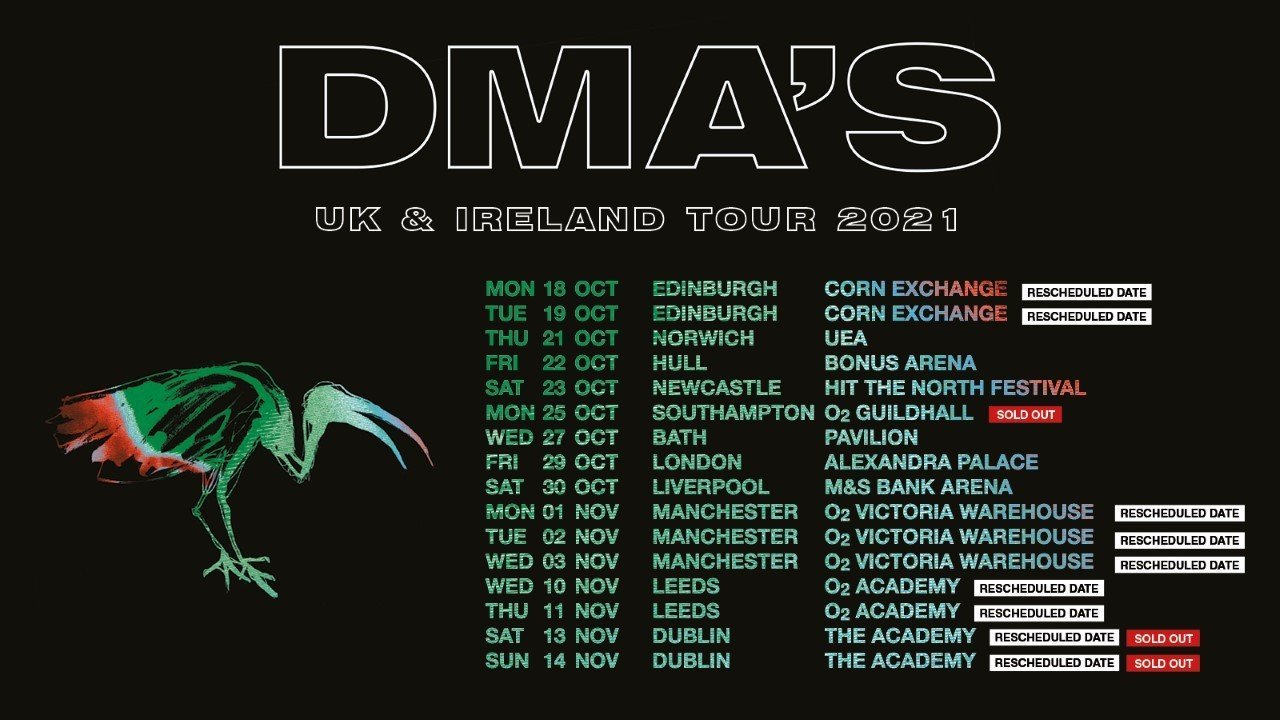 RESCHEDULED FOR THE AUTUMN

“Their expansion into a six-piece for their live performance is emphatic and triumphant.” – Gigwise

As festival cancellations, general restrictions and logistics continue to play havoc with this summer’s live events, DMA’S are no longer going to be able to play their planned shows in the UK this summer. Instead they will move their headline outdoor shows in Manchester Castlefield Bowl, Leeds Millennium Square and Edinburgh Princess Gardens to multiple indoor shows in each city this autumn. Ticket holders for these shows will be contacted by their original ticket agent with the details.

In addition, the band’s two Dublin shows, originally planned for August, have been rescheduled to November.  Tickets for the Newcastle Times Square show can be refunded or exchanged for their headline show at the city’s Hit The North Festival on October 23rd. Your ticket provider will be in touch in the coming days to issue your choice of new tickets or a refund.

DMA’S commented, “We’re gutted that we aren’t able to come over and play the UK this summer. We’d been trying to make it work and were all ready to go, but the recent festival situation means it’s no longer feasible.

We really appreciate some of you have been holding tickets for well over a year, and we hope you agree that rather than wait yet another year we move the summer headline shows onto our autumn tour and into some great indoor venues. This way we get to see you a whole lot sooner! Thank you for your patience and we can’t wait to get over in October.”

The band’s updated UK and Ireland tour now runs as below:

DMA’S’ autumn tour was already easily the biggest of their career to date, with a 10,000 capacity London show at Alexandra Palace, a headline slot at Newcastle’s Hit The North Festival, and arena dates in Liverpool and Hull. The new tour schedule means that they will play a total of sixteen shows to a combined audience of approximately 50,000 people.

Each gig in the tour is sure to be an emotionally charged event as the band return to the UK for the first time since selling out the O2 Academy Brixton in March 2020 – a show which was documented in their electrifying Top 20 album ‘Live At Brixton’.

This autumn will also represent the first chance for fans to see DMA’S in action since they released their third studio album ‘THE GLOW’. It represented a huge leap forward for the Australian trio, infusing their euphoric anthems with pulsating alt-pop synths and big beat dynamics, a heady blend which resulted in their highest chart positions of their career: #4 in the UK and #2 in Australia.