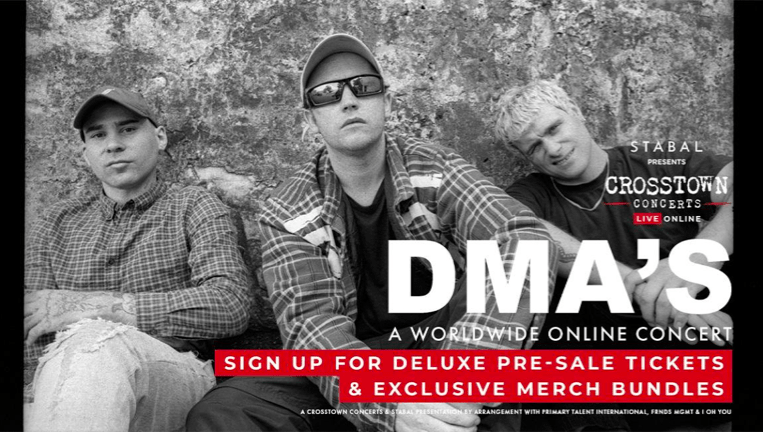 TO BE BROADCAST ON MAY 29TH

“Despite their catalogue of hits often striking a melancholic vibe, their expansion into a six-piece for their live performance is emphatic and triumphant.”– Gigwise

Despite the ongoing restrictions putting gigs on hold, DMA’S have done all they can to continue to connect fans to the life-affirming energy and emotion of their live show. They recently released ‘Live At Brixton‘, an electrifying document of one of their last shows pre-lockdown, which hit the UK Top 20. They’ve also shared performances from2020’s virtual Splendour in the Grass festival, live footage from Australian TV show The Sound, and home-filmed acoustic and isolation sessions.  They even performed to a huge televised audience at Australia’s AFL Grand Final in October.

Filmed in the sparse warehouse aesthetic of the Carriage works venue in the band’s hometown of Sydney, the show will see DMA’S mixing some all-time fan favourites with some songs which they will perform live for the very first time. It promises to be an event that captures the high-end production of their renowned MTV Unplugged set with the exuberant rush of their full live show.

DMA’S commented, “After such a long time without playing shows we are really excited to announce a worldwide online concert which will be filmed in our hometown of Sydney. We are really looking forward to playing to a crowd again, and hope it fills the gap until we can all be united at shows again.”

DMA’S’ third studio album ‘THE GLOW’was released last summer. It represented a huge leap forward for the Australian trio, infusing their euphoric anthems with pulsating alt-pop synths and big beat dynamics, a heady blend which resulted in their highest chart positions of their career: #4 in the UK and #2 in Australia.