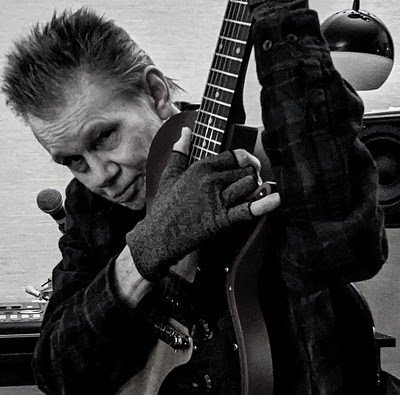 on Anniversary of his Passing with Raw Salute of B.B.’s Song, “Bad Luck”

David LaDuke is dedicating his cover of B.B. King’s song “Bad Luck” to the late great guitarist, himself. B.B. King passed away on May 14, 2015, from Alzheimer’s disease and other health issues.

Though David’s guitar style is more chord-oriented, and B.B.’s was more single-note and deliberate, he was always a fan. “I’ve been to tons of his concerts and am heavily influenced by the blues.”

B.B. King released “Bad Luck” in 1956, and it hit number 3 on the charts. The song is credited as a co-write with Joe Josea, who was also responsible for discovering Johnny “Guitar Watson. Aleksandar Filimonovic portrays Josea in the Netflix film “Dolemite Is My Name.”

Listen to David’s version of “Bad Luck” at https://www.youtube.com/watch?v=9UD_hnFk08Y.

David continues to share songs from his archives. The music video for his “Psychedelic Sandwich” will be live on Bongo Boy T.V.’s Season 10-Episode 5 edition (May 4, 2021 premiere), which broadcasts on 72-plus T.V. channels and music video shows. Stay tuned to the channel at https://vimeo.com/channels/bongoboytv.

“Contemporary Fusion Reviews” writer Dick Metcalf favored “Psychedelic Sandwich” as his favorite song on Bongo Boy’s 63rd FYC album. “Exactly the kinda’ tune I would be rockin’ to as I put my moto-cycle boots on in the morning back in the day!” The song, co-written with Talas’ Phil Naro, was cited in “The Ark of Music” for its “intense, retro-psych sound and absolutely killer guitar solo.”

Mr. LaDuke is preparing to release a new album, Put Up Your Dukes, later this fall which will feature both “Bad Luck” and “Psychedelic Sandwich. The album will include some new tunes, unreleased tracks, and demos.

David LaDuke has been playing roots/metal/rock n’ roll since 1973. He and his group Sinbad have released several LPs, EPs, and CDs. His album SINBAD was on the California-based indie label Azra International (Overkill, Liege Lord, Intruder, Jag Panzer).

His solo releases include Have Rock Will Travel, Ball Bustin’ Guitar Rock! (plus two live EPs), Absolutely Raw (Nothing more. Nothing less.), Absolute Rock (In the buff.) including the CDs: Rock Hard Rocker and Rock with Balls.

His unique blend of 1970s’ guitar rock, with an Elvis Presley-influenced grove helped Davi gain an excellent reputation throughout underground in the mid-‘80s/early ‘90s in Hard Rock and Metal Magazines, Fanzines and underground Radio shows worldwide.

By the end of the ’80s, Sinbad Productions was born. After leaving the stage in 1991 to raise his son, David continued to record, release CDs and EPs. He also published “BallBuster Magazine,” which was available in stores and bookshops worldwide, until 1999. He has since supported the International rock scene—partly through his well-regarded website, BallbusterMusic.com and social media page, https://www.facebook.com/BallBusterMusic