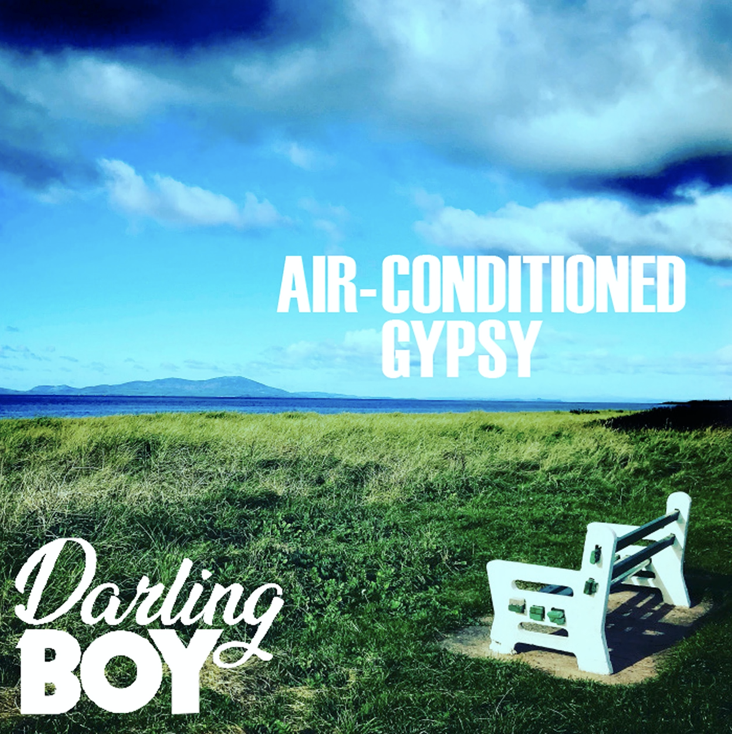 “I don’t quite know the dictionary definition of ‘swashbuckling’, but Darling BOY seems to have made an aural one with ‘Air Conditioned Gypsy’. It’s Douglas Fairbanks Jnr swinging down to attack the Smiths with his banjo in hand, {yes, that’s banjo folks}. A rum and cider fuelled charge towards a barrel with a lit fuse sparking down to the word gunpowder written on the side. Is it possible to ‘rip snort’? This track might just do that.” – ANDY PARTRIDGE, XTC

Borrowing its title from a lyric in The Who classic ‘Going Mobile’, ‘Air Conditioned Gypsy’ has all the vim and vigour of that Who’s Next cut, while archly weaving-in Smiths-y interloping guitars and an Oasis-like bravado. The creation and homage of a true music aficionado, Darling BOY proudly wears his influences on his sleeve here and fashions them into something fresh, exciting and entirely his own.

Written over a weekend while staying in Dublin, ‘Air Conditioned Gypsy’ is a celebration of being carefree, living on your wits and approaching life with a willingness to find hope in times of adversity. “We’ll steal a future… now I’ve found you, I’ll never see a day without you” Gold sings, his crystalline vocal etching optimistic words over intricately layered arrangements.

With history full of musical mavericks who have dared to break the mould to create some of their most enduring work, Darling BOY outlines some of the rock greats who came to inspire this latest song:

“Musically there’s a nod and a wink to the Smiths and Oasis” says Gold, “before it morphs into something (in my head at least) approaching latter-day Arctic Monkeys, back-to-his-original-accent Paul Weller and Give Out But Don’t Give Up-era Primal Scream. The freewheeling vocal near the climax of the song is a small homage to Pink Floyd’s Great Gig In The Sky and is sung by one of the members of a very famous girl band – also one of the authors of that band’s biggest hit. But I’m sworn not to tell you who it is. ;-)”

Recently taken under the wing of XTC’s Andy Partridge, it is surely not too bold or brash a statement to suggest that Darling BOY is perhaps one of the most intriguing and precocious young men in popular music today.

Darling BOY, or Alexander Gold, (for that is his given name) is an entirely self-taught multi-instrumentalist, songwriter and actor. He’s starred alongside Jonathan Rhys Meyers’ Joe Strummer as The Clash’s Topper Headon in the feature film London Town, and more recently named as Musical Director of the smash hit musical All Or Nothing in London’s West End having played Ian ‘Mac’ McLagan of Small Facesand The Faces and is playing John Lennon as part of one of the world’s biggest cruise ships’ resident Beatles.

He’s a member of The United Kingdom Ukulele Orchestra, been a guest of Dolly Parton in deepest Tennessee and asked to join two – two! – of Libertines mainman Carl Barât‘s bands. He’s been a member of Joey Ramone’s favourite band of all time, got talked out of setting up a London squat by Sex Pistol Glen Matlock, and been taken out for dinner by Moby.

As if all that wasn’t enough, Alex has also joined Supergrass’ Danny Goffey’s new band, switching between bass, guitar and drums.

“I bought my first Supergrass record in my teens after hearing ‘Richard III’ and thinking “f**k me, that drummer’s good”, Alex explains. “They were obviously a great band (and, uniquely among their peers, always remained so), but being a new drummer myself and totally obsessed with the instrument it was Danny Goffey’s playing that hooked me in. To be asked to join the band is completely mental.”

Ultimately though it’s creating music that spurs Alex on, and Darling BOY is the vehicle that finds him well and truly in the driving seat. Bursting from the speakers in an eddy of amplified acoustic thrum, blindsiding time-signature changes and soaring break of stand-out vocals, guitars, brass and banjos; ‘Air Conditioned Gypsy’ is a release that spells-out his big ambitions and to make it of his own accord.

Produced and mixed by Matt Terry and Gethin Pearson (The Enemy/Kele/Charli XCX) alongside Darling BOY himself, additional mastering for the track was completed by John Rivers (The Specials).

Enthusiastically referential and expertly self-aware, ‘Air Conditioned Gypsy’ is a modern-rock masterclass from one of the genre’s most prominent rising stars.