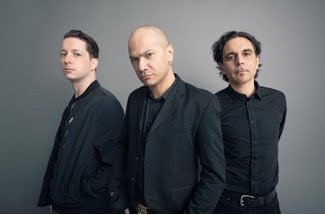 POWER TRIO OUT AUGUST 27TH VIA MATE IN GERMANY

Rock icons Danko Jones announce two Livestream performances in celebration of the release of their 10th studio album Power Trio, out August 27th via MATE in Germany. The live streams are set for Saturday, August 28th at 8:00 PM ET / 5:00 PM PT and at 8:00 PM CET and will be streamed live from Bridgeworks in Hamilton, Ontario.

To add to the excitement, the band will also be doing a Q&A for viewers after the performances. Tickets & info can be found HERE

Along with the Livestream show announcements, the band has also released a new song today, “Start The Show”. Stream it HERE! And watch the lyric video HERE!

Ironically the last song on Power Trio, it is essentially Danko Jones’ answer to Cheap Trick’s “Hello There” – i.e., a song tailor-made to be the first song played at a Danko Jones show. It’s a reaffirmation of everything he was put on this earth to do. But in the wake of this pandemic-plagued year, the song also makes for a surprisingly poignant album closer, because it’s a reminder of all the shows that Danko didn’t get to play this past year, and a reminder of how much we’ve all missed that goosebump-inducing feeling of being in a packed club when the house lights go down, the music playing over the PA cuts out, and your favourite power trio emerges from the darkness to kick into their opening tune.  And yet despite this bittersweet subtext, “Start the Show” is brimming with the promise that we will experience that feeling once again—and, after the black cloud of COVID clears, Danko Jones will be there ready to give it to you.

“Start The Show” follows previously released singles “Saturday” and “I Want Out“.  Hitting #1 at German Rock Radio and Top 15 at Canadian Rock Radio, “I Want Out” has seen success with airplay around the globe. In April the band also released a fan-only track “Flaunt It”.  Album pre-orders are available HERE!

MORE ABOUT POWER TRIO:
Power Trio sees Danko Jones delivering each engine-revving riff, soul-shaking stomp, and shout-it-loud hook with a sniper’s precision. It’s such a simple, self-evident title, but one loaded with significance, as it speaks to the special triangular alchemy Danko shares with his trusty bass-slinging accomplice JC and drummer Rich Knox.  It also stakes out the band’s place on a storied lineage of three-piece titans Jimi Hendrix Experience, ZZ Top, Rush, Motörhead, Venom, Dinosaur Jr., and the Jon Spencer Blues Explosion, to name a few.

The album follows the band’s electrifying, world charting album, A Rock Supreme released in 2019. It also sees the band once again tapping into the production prowess of Eric Ratz, who previously amped up the bone-breaking boogie of 2017’s full-throttle rocker Wild Cat and 2015’s bloodlusty Fire Music.
Band Photo By Dustin Rabin