“Beauty and menace grapple jealously, each attempting to wrestle control of the proceedings.  Dripping in quaking doom riffs and vibrant leads… It’s immense, and the diversity and creativity grow stronger with every spin.” – TERRORIZER

New Jersey shorecore gods SOLACE return this December with sprawling, blistering double LP The Brink, their first full outing since their acclaimed A.D. album was named one of iTunes’ Top 10 Metal Records of the Year (alongside High on Fire and Unearthly Trance) in 2010.

An epic return, The Brink is a glorious trek through churning riffage, weighty doom power and drunken sea shanties.  Embracing a NWOBHM dual-guitar attack more completely than ever before, the 11-song 2LP likewise maintains a death grip on the band’s trademark volatility and sonic roots.

In 1996, Solace rose from the ashes of Atlantic Records alumni Godspeed, appearing on the Nativity in Black tribute behind Bruce Dickinson and making their name on Headbanger’s Ball.

As Solace, the new entity was driven by hardcore-infused metal, anthemic vocals and a crushing doom underbelly.

Second album 13 followed in 2003, highlighting their increasingly epic songwriting and hardcore-meets-metal-meets-doom approach.  Kerrang! characterized it as such:

“Solace exist in a world where The Obsessed and Saint Vitus rule the stoner roost.  This US four-piece produce mammoth, mid-paced doom epics which are heavy on melody and low on cheery stoner vibes… a vast, sprawling dose of bloated rifferama which manages to be both irresistibly catchy and thoroughly terrifying at the same time.” (4 Ks)

A pair of EPs in 2005 and 2007 plus slots at the coveted Roadburn Fest in 2006 and 2009 kept the momentum going, culminating in Solace‘s 2010 milestone, A.D. The titanic offering was the band’s most fully-realized achievement, a record All Music Guide called,“a six-string maelstrom” and “a guitar album through and through — even by the standards of this genre.”

With various members battling personal and psychological demons, the next few years saw the band draw back and regroup. But with a reconstructed lineup and stronger than ever, Solace dropped new single ‘Bird of Ill Omen’ in 2017 and a monster cover of “In The Flesh” on Magnetic Eye Records‘ The Wall [Redux] in 2018.

As they began showing up on festivals like Descendants of Crom, Maryland Doom Fest, Vultures of Volume and New England Stoner and Doom, the time had come at last for a new album.

In the final month of 2019, Solace return with The Brink. As the world stands at the edge of another uncertain decade, the pummeling, exquisite bombast of The Brink reasserts the dominance of New Jersey’s godfathers of dirt metal glory.

“Grooves along in down-tuned abandon, offering tasty tunes for anyone locked into the era when guitar players actually learned multifaceted uses of their instrument.” – Metal Maniacs

“Riffs urge themselves on like flows of lava, and yet they’re so concentrated they sound as though they’re vaporising into a heady elixir.  More than most of their peers, Solace have all the force of a personal vendetta.” – Rock Sound

“Density with a careful blend of Southern drawl, acid trip, and asteroids… a transcendence above the usual slow-footed shuffle that weighs down the bulk of the stone-agers.” – Outburn

“Evidently this New Jersey quarter didst consort with an evil alchemist to perfect their Black Sabbath sound. Indubitably, it is an ancient formula, but there is creepy comfort in hearing it done well.” – Guitar One 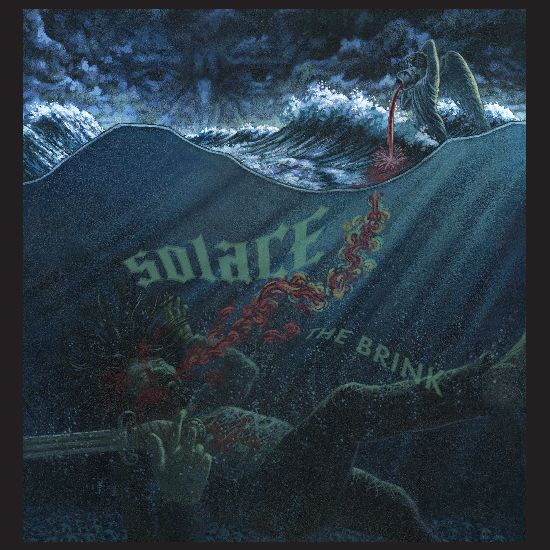 The Brink will be released on digital, CD and 2xLP from Blues Funeral Recordings on December 13th.  Pre-orders are available at this location.